The Symbolic World Of The Maya

As a kid, Egyptian hieroglyphics captured my imagination. I spent hours poring over books, trying to recreate the symbols and create messages only me and my friends would understand. At high school, the Mayans caught my attention for the exact same reason as the Egyptians – they had a written language that not only looked beautiful, but each symbol held a story of its own.

One of the features that distinguishes the Maya from other cultures in Mesoamerica is their development of a written language, often called Maya Hieroglyphic Writing, or Glyphs. This complex system of symbols has baffled scientists for years, and it wasn’t until the mid-twentieth century when Mayanist, Tatiani Proskouriakoff, had a major breakthrough that finally had people agreeing that the glyphs were a fully functional system based on phonetic signs.
While English is simple and comprised of only 26 letters (signs), the Maya symbols are made from various combinations of nearly 800 signs. Each one represents a full syllable, and so the system is called a syllabary, not an alphabet like we use.
Mayan writers had a vast selection when it came to choosing a symbol to represent one sound. For example, there might be five different signs that all sound the same. Sounds confusing? Yes. Fascinating? Absolutely, yes! Imagine having artistic licence to create your own writing style. No wonder the experts have had so much trouble deciphering the meaning behind each of the Mayan symbols.
Scientists believe the codices and other important texts of the Mayans were written by scribes who were usually members of the Mayan priesthood. The glyphs themselves were painted on ceramics and walls, carved in wood, and moulded in stucco or on bark-paper codices.

With all the advances in technology and the countless hours scientists have put into studying the Maya Glyphs, 90% of Mayan writing can now be read with accuracy. The glyphs are written in blocks that consist of two columns and are read from left to right, top to bottom.
In Mexico, during the era of the Spanish Conquistadors, the Bishop Diego de Landa ordered the collection and destruction of all written Maya works, including codices. His bright idea came back and bit him in the butt later when he tried to convert the Mayans from their own religion to Christianity. Because he’d destroyed most of their written works, he had to develop a new way of communicating with them. The de Landa Alphabet was invented to help with his “teachings.” Although it wasn’t a true representation of the Mayan’s written language, it became an important key for scientists years later when they started to decipher the Maya script. The biggest problem was there wasn’t a direct relation between de Landa’s Alphabet and the Mayan Glyphs. No doubt, the Mayan scientists probably invented a few choice words of their own during the process. 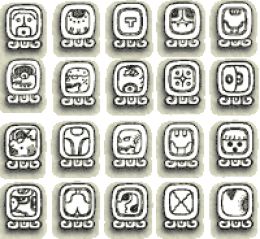 Unfortunately, only four Maya codices survived the destruction of the conquistadors but other text has been found on pottery found in Mayan tombs or on monuments that had been buried long before the Spanish arrived.
These days, Mayan writing is taught in public schools and universities in the Mayan speaking regions in Mexico and is supported and promoted by the Mexican government. It’s encouraging to see that we have finally realised how precious our history, and culture, is and how important it is to preserve it not only for now, but for future generations. Mistakes are only worthwhile if we learn from them.
Posted by Alli Sinclair at 7:00 AM