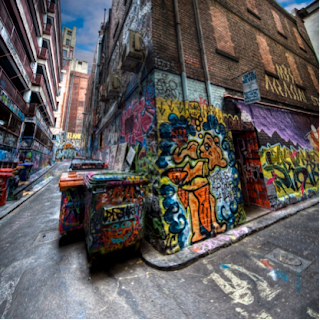 While Alli is off exploring the wilds of the Barossa Valley in South Australia (translation: visiting lots of wineries and eating too much cheese), her brother Dave is stepping in this week. Dave is a writer, a blogger and an excellent parallel parker. You can harass him at his own website or on Twitter: https://twitter.com/#!/thedavesinclair or on his website at www.davesinclair.com.au.

Years ago I was flying around Canada and picked up Air Canada’s inflight magazine. In it, their travel writer was talking about Melbourne.  He said the first time he visited the city, in his words, he hated it.  Sure, there were pretty bits but it seemed to be ‘just another city’.  It was bereft of attractions like Sydney, or weather of Brisbane and frankly, soulless.

Years later, he reluctantly went back and was shown around by locals.  It was as if he’d been shown a completely different city.  He finally ‘got it’.  He fell in love with the city that day.

Melbourne may be many things – obvious isn’t one of them.

If you ask a Melbournian what makes their city unique and you’ll often get the same answer – our laneways.  For the uninitiated, this is an odd response, until you experience them yourself.  The centre of Melbourne city is a labyrinth.  Sure, it has lovely wide tree lined streets, but once you step off the main path it’s a whole new world.  Down the kaleidoscope coloured graffiti walls is an endless supply of the unexpected.

Every few days, a new bar opens behind an unmarked door.  Brilliant culinary delights can be hidden around the next corner.  You just have to know where to look.  The only constant is that there will be something new and exciting just waiting to be discovered.
The fact that the laneway culture was created organically, with no final agenda, was conceived and supported by grass root Melbournian’s only makes it more special. 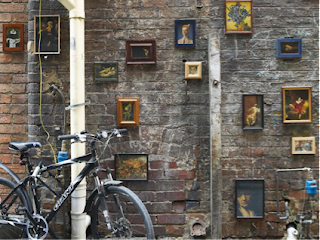 I’ve lost count of the times I’ve shown someone the city and I’m sure they thought they were just about to be rolled.  Walking past the stinking bins, piss stained walls and puddle laden cobblestones, I’m surprised none of them turned around and shrieked, ‘Just take my wallet, please don’t hurt me!’

The art of the laneways is impressive and ever changing.  Tourists from all over the world are stunned by volume of brilliant graffiti that adorn walls throughout our laneways.  And due to its very nature, it is forever transforming.  Even Banksy pieces have been painted over.  There’s nothing permanent about Melbourne art.

Robert Doyle, the Lord Mayor of Melbourne (and borderline crackpot, but that’s another post) was pictured in The Age newspaper under a stencil of himself in Hosier Lane praising its street art as a ''legitimate expression of artistic intent''.  Not many cities have their civic leaders supporting graffiti (here).   The same article quotes another official saying “This is my laneway and a tourist attraction bringing in up to a thousand people a day because of the street art”. 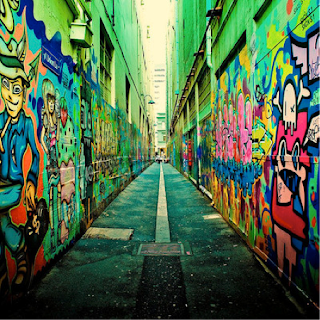 But not everything about laneways is positive.  A recent decision by the state government sold off Elliot Lane, and part Merriman Lane to developers to make way for a huge apartment complex. This has rightly stirred the ire of many.  This short sighted and almighty dollar focussed decision flies in face of what the laneways represent.

Selling part of what makes the city unique is tantamount to cutting off a part of our own body.  It can never be replaced, and it makes us less whole.  Keep it up and we may very well end up like the first impression of our Canadian cousin – soulless.