Off The Beaten Track: Long Island—the Real and Imaginary Settings for My Mysteries 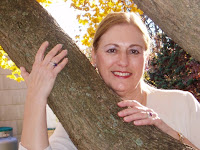 Our guest this week is Marilyn Levinson, who writes mysteries and novels for kids. Her debut mystery, A MURDERER AMONG US, was awarded a Best Indie of 2011 by Suspense Magazine. She has since written a sequel entitled MURDER IN THE AIR. Her latest release, GIVING UP THE GHOST, is a mystery about an English teacher who discovers she's sharing a cottage with a sexy, heart-throb ghost. You can read an interview with Cameron, the ghost, at: The Unpredictable Muse. Marilyn lives on Long Island with her husband, Bernie, and their cat, Sammy. You can visit Marilyn at http://www.marilynlevinson.com/.
I love to travel and see new sights. Every year, my husband and I take a trip abroad. I am a former Spanish teacher, and in my younger days I’ve spent summers studying in Mexico City and Valencia, Spain. Right now I’m writing a children’s book that takes place on the Cote d’Azur. But when it comes to writing mysteries, my setting is always Long Island, where I’ve lived most of my life.

Long Island means Nassau and Suffolk to most people, but officially it also includes Brooklyn, and Queens. I’ve lived in all four counties. I was born in Brooklyn and lived there until my family moved to western Nassau County when I was fourteen. After attending college university in Upstate NY, I lived in Queens until I married. After that, each move has taken me further and further east on Long Island. I sometimes wonder if my husband and I will end up living out on Montauk by the time we’re in our eighties.

Various Indian tribes once inhabited Long Island. Hauppauge, Quogue, Nissequogue, and Patchogue are just a few of our towns and locales with Indian names. European settlements date back to the 1600’s. For centuries, farming was a major occupation, and many farms remain in eastern Suffolk. More recently, that area has become famous for its many vineyards and wineries.

In the early twentieth century, wealthy New Yorkers built mansions amid acres of land, many of them facing the Long Island Sound and Connecticut. And so the famous Gold Coast came into existence. The Hamptons and Fire Island have gained larger than life stature. And there’s no ignoring the famous old whaling villages of Cold Spring Harbor and Sag Harbor. But don’t believe for one moment that everyone who lives on Long Island has money. There are many lower income communities here as well. In my mysteries, I make use of them all.

My characters in these books visit well-known places like The North Fork or the Hamptons, but I created the towns and villages where they live. Chrissom Harbor is the name of the village in GIVING UP THE GHOST. Of course it’s not on a map of Long Island, but I imagine CH situated in the northern part of central Suffolk County—somewhere in the vicinity of Rocky Point, Shoreham, and Wading River. It’s an old fishing village, with a wonderful small, protected harbor that attracts many summer boating people. Though upscale housing communities are being built in the area, Main Street is lined with old shops and tackle stores that need to enter the twenty-first century. High bluffs overlook the Long Island Sound, with wooden staircases leading to the beach below.

Cameron Leeds, my heart-throb ghost in GIVING UP THE GHOST, supposedly fell to his death from the bluff beyond his cottage. After Gabbie moves into his cottage, he convinces her to find out who murdered him. Gabbie discovers everyone in CH knows everyone else’s business, including her own. Though many people are happy Cam is dead, no one’s willing to give her any leads. Until she asks too many questions, and the murderer tries to shut her up for good.
A MURDERER AMONG US and MURDER IN THE AIR take place in an upscale, over-55 gated community I named Twin Lakes. There are many senior communities on Long Island, but none are built around two long lakes named after two Indian tribes.

In my series featuring Lexie Driscoll, who leads a Golden Age of Mystery book club, the setting varies from book to book. In MURDER A LA CHRISTIE, Lexie finds herself living in Old Cadfield, a wealthy community in Nassau County. While I had no specific village in mind, I drew from many beautiful villages with some of the loveliest homes in America. And I did have one particularly beautiful mansion and its gardens in mind as the setting for a spectacular fundraiser that Lexie attends. More importantly, Old Cadfield is meant to be a modern day setting similar to Agatha Christie’s manor houses and villages where people think they know one another, yet  everyone harbors a secret. Lexie, a free spirit whose home was burned down by her second husband with him inside, doesn’t feel comfortable living in Old Cadfield. She finds herself at odds with her best friend and college roommate who defends Old Cadfield’s residents, even though one of them might have committed murder.

Because Long Island has so many interesting and varied facets, I plan to set future mysteries here for years to come.

Email ThisBlogThis!Share to TwitterShare to FacebookShare to Pinterest
Labels: Giving Up The Ghost, Long Island, Marilyn Levinson, mysteries, Off The Beaten Track, The Hamptons