The Immortal Life of Egyptian Hieroglyphs 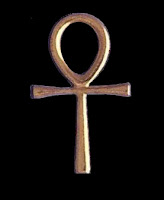 Of all the ancient Egyptian hieroglyphs, none is more well known than the symbol of life, or the “ankh.” It looks like a cross, only with a loop above the transverse line, and in fact is known in Christianity as crux ansata, or the handled or “eyed” cross. Egyptian gods are often portrayed carrying it by the loop or, arms crossed over their chests, one in each hand. But its history and the origin of its meaning are as mysterious as the ancient Egyptians themselves.


Egyptologists aren’t really sure of the ankh’s origin but they have several theories, none of which they have been able to verify. One theory is that the ankh’s meaning is a biological interpretation of ancient cattle culture and may represent a bull’s thoraxic vertebrate. Another says that it’s the belt buckle or even the sandal strap of the goddess Isis. Yet another theory says that it represents the Nile, and that the loop on top represents the all-important Nile delta. 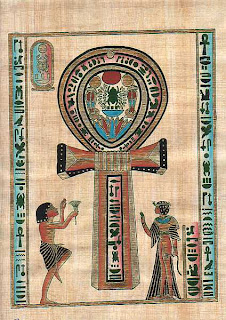 The ankh represents all facets of life, including  conception, the afterlife, and the soul. It is often seen with the djed and was hieroglyphs, representing strength and health respectively. They’re also used to give us glimpses into other worlds. Sometimes the gods are shown holding an ankh to the lips of mortals, which means the gods are blessing them with immortality, or the breath of life.

When I was in high school, anything New Age-y was pretty hot, including “ankh” pendants, which were all the rage. The most common were made of sterling silver, but turns out, that was not in keeping with tradition. The ancient Egyptians never made ankhs out of silver. As a symbol associated with the sun, ankhs were usually fashioned out of gold or even copper. At one point, ancient Cyprus and parts of Asia Minor produced coins with the ankh displayed on them. Even today, the ankh is associated in Cyprus with the goddess Venus (or Aphrodite), whom the Cypriots worshipped, and with copper.

Hieroglyphs themselves are an amazing invention. They date back to at least 4,000 B.C. (at least that’s our oldest-known record of them), and they combine what we know as the alphabet with pictoral symbols, taking Egypt from a preliterate artistic tradition into hieroglyphic writing. Scholars debate whether the idea of expressing words in writing came to Egypt from Sumerian Mesopotamia or whether the ancient Egyptians developed writing independently. By the 4th century AD though, most Egyptians couldn’t read hieroglyphs anymore, especially after the Roman Emperor Theodosius I closed all non-Christian temples in his empire.

Early attempts at translating the ancient picture-script were mostly wrong. The breakthrough though occurred in 1799, when Napoleon invaded Egypt and discovered the Rosetta Stone, and in the early 19th century, Egyptology was born when its early scholars were able to decode part of the stone and realized it was an incredible and complex combination of phonetic, figurative, and symbolic code rolled into one. You can read them phonetically—from left to right, right to left, or from top to bottom—to get one meaning, independent of the pictures themselves. Read this way, there are about 24 letters, without the kind of vowels we have in English, blank spaces between words, or even punctuation. The reader has to figure out which direction to read the letters. For example, if animals or humans appear in the hieroglyphs, and if they face towards the left, then you should read the script left to right. If you don’t want to read it phonetically, you can also read it according to the pictoral images, considered as nouns. In that way, there are at least 5,000 symbols, which have both direct meanings or indirect ones. So for example, a roll of papyrus could represent books or it could represent ideas, depending on the context.

Egyptians hieroglyphs have fascinated us for so long, it’s no wonder they have made their way into so many films and novels. Just as with the ancient pharaohs who used them on their cartouches (those stone tablets enclosing a sovereign’s name or emblem) and pyramids to appease the gods. Used mostly by priests, hieroglyphs were even considered the “words of god.” So too, we continue to associate these ancient symbols with magical, mystical elements, much like the ankh, which infuses them with eternal life.
Posted by Supriya Savkoor at 7:00 AM