Polygamy: Be Careful What You Wish for, You May Get It 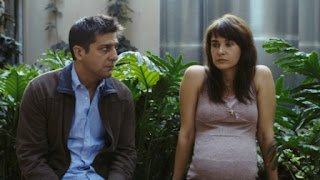 Last year, I wrote a number of movie reviews for the Astoria International Film Festival.  A few of them – really good, non-traditional, and even somewhat unorthodox – have stayed with me. Polygamy, a Hungarian flick by Dénes Orosz, was one of them. Dénes managed to explore this ever-controversial subject from an angle of what would happen if someone’s coveted wish to have more than one spouse was miraculously fulfilled. He did it with humor and charm – and a never-ending array of surprises.
A young Hungarian couple, Andrash and Lilla, have been in a loving relationship long enough for a commitment. As a typical woman, Lilla wants marriage and children. As a typical man, Andrash doesn’t know what he wants, but he feels he hadn’t played around enough and wishes he would’ve. Then Lilla breaks the news that she's pregnant, and strange things start happening.
Andrash’s unspoken philandering aspirations are magically granted. Every morning, he wakes up next to a new Lilla, who looks, walks, dresses, and acts differently from the previous one. Interestingly enough, this unending variety of Lillas has one thing in common: they all declare their undying love for Andrash, and they all continue being pregnant, so every next Lilla has a slightly bigger belly than the previous one. Quite bewildered, Andrash doesn’t know what to do and embraces his newfound freedom at first – only to realize that leapfrogging through relationships can be taxing. Every Lilla’s tastes and lifestyles differ, so he never knows what to expect. One of them buys him a wooden statue, the next one breaks it, the third one demands he fixes it, while the fourth one throws it away. For all her faults, the original Lilla was truly his, and Andrash knew all of her idiosyncrasies. Now women hop in and out of his life like locust, leaving him worn out, empty, and confused. As the time for the baby's due date approaches, he starts to search for the real Lilla to bring her back. The question is – can he find her – or is he doomed to be forever stuck in his dystopian reality that is thought to be every man’s dream?
When I asked Dénes Orosz if his movie was in any way based on his personal experience, he said yes. When I asked him if he gave his character his personal traits, he said yes – although he admitted he dramatized the story. When I questioned him whether the point he wanted to get across was be careful what you wish for, you may get it, he gave me a bit of a long-winded answer, which basically boiled down to a “sort of.” And when I finally got to ask what did all female actors in the movie think about the idea of the film (and there were way more than a dozen!), he replied they fully connected with the protagonist's emotional crisis and they agreed that Andrash’s fear of commitment was very real and typical for a man.
So, what’s your take on polygamy?
Posted by Lina Zeldovich at 7:00 AM