Chelo Kabab – Comfort on a Plate 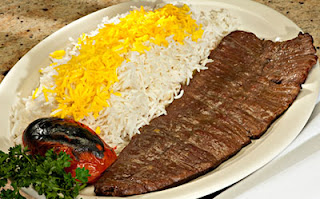 With Thanksgiving only a few days away (at least here in the United States), our thoughts turn toward food, especially the traditional meals of childhood – in short, comfort food. For me, that special meal usually involves cheese: fondue, pizza, or even just a simple cheddar and tomato sandwich.
But I usually write about Persian culture on this blog, so I asked my husband what comfort food meant to him. Without hesitation, he replied, “chelo kabab.” What’s more, he insisted that every Iranian would consider this dish to be their idea of the ultimate comfort food, associated with warm childhood memories. In fact, chelo kabab is so popular, it’s regarded as Iran’s national dish.
The centerpiece of this meal is a big plate of steamed white rice, topped with a splash of golden saffron. That’s the chelo part of the dish. Chelo’s distinctive feature is tadiq, the crispy layer that forms at the bottom of the pot. Tadiq is so highly prized that dinnertime battles can arise over who gets the biggest piece.
The kabab part involves large chunks of marinated meat (usually beef, lamb, chicken, or fish) that are grilled on skewers over a charcoal fire. Actually, in colloquial speech, Iranians refer to any grilled meat as kabab, regardless of whether it’s been cooked on a stick.
One of my favorite versions is koobideh, a kabab made with ground lamb or beef that is wrapped around wide, flat skewers and cooked on a special grill. Known as a manghal this grill has no grate, since koobideh is so delicate it would stick to the grate and fall apart. Instead, the skewers are fitted into slots, and the meat cooks right over the glowing coals. 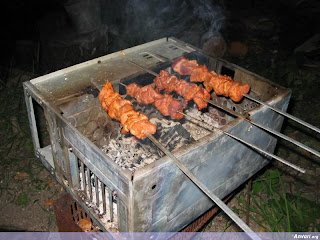 In its most basic form, kabab is marinated with onions and lemon or lime juice, with saffron added to chicken. But the marinades are as varied the cooks who make them, with everyone contributing her own special recipe. My mother-in-law adds chunks of bell pepper to beef to make the meat more aromatic, and a friend from Shiraz marinates her chicken kababs in yogurt, which acts as a tenderizer and helps avoid a tough, dry texture.
Check out this recipe for joojeh kabab (saffron-scented chicken). A recipe for chelo can be found here.
When I have guests over for dinner, I like to make kabab torsh because it is such an unusual version, a regional specialty of Gilan Province in the north of Iran. Torsh means “sour” in Farsi, and this type of kabab has a sweet-and-sour taste from the alu (plum) or anar (pomegranate) paste added to the marinade.
I first sampled kabab torsh in a restaurant high in the mountains, where diners sat at balcony tables that offered views of the Caspian Sea, with its expanse of cobalt blue stretching beyond the mist-draped hills. When I asked the proprietor (who was also the cook) for the recipe, she answered in typical Iranian style by listing the ingredients and leaving it up to me to figure out how to put them together and in what proportions. 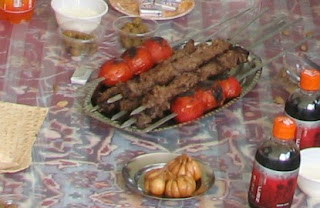 After much experimentation, I came up with this:
1 pound of boneless beef or lamb (tenderloin is best), cut into large chunks
1 small onion, coarsely chopped
2 tablespoons of pomegranate paste* or ½ cup of pomegranate molasses
hot water for dilution
1 tablespoon chopped parsley
1—2 cloves garlic, crushed
¼ cup walnuts, very finely ground
* Iranians call this rob’ anar, and it’s available in Middle Eastern markets.
Mix the meat cubes and onions together in a bowl.
Dilute the pomegranate paste with enough hot water to make a thin soupy consistency, and mix in the parsley, garlic, and walnuts. Pour the marinade over the meat/onion mixture and toss to coat the meat thoroughly. Marinate in the refrigerator for at least one hour (though overnight is best).
To grill, remove the onions and excess marinade. Slide the cubes onto skewers (5—6 chunks per skewer). Barbecue on a grill until the meat is cooked to the desired doneness, turning several times. Noosheh jaan!
Chelo kabab is always accompanied by grilled tomatoes, an undressed salad made of fresh herbs (usually basil, mint, tarragon, and green onions), chunks of feta cheese, walnuts, and flat bread. A dish of plain yogurt, assorted pickles, and olives are optional. The traditional beverage accompaniment is doogh, a minty yogurt drink.
So what about you? What is your idea of comfort food?
Posted by Heidi Noroozy at 7:00 AM