God with His Girlfriends

Well, if that puts you off, then maybe you shouldn’t look at the following picture. (You’ll have to scroll down a bit if you choose to see it. I don’t want to offend anyone who decides not to.) 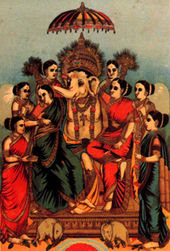 Or (blush) this one: 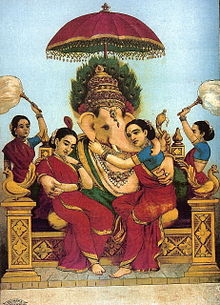 They do make for a good story, though, so here goes.

These two paintings show Lord Ganesha, whom I’ve blogged about before, with a bevy of babes, some a little, ahem, closer to the mighty deity than you think would be permitted.

Of course, truth be told, if any god were going to have a harem, I would have placed my bets on Ganesha. He’s a bit of a partier, and he does like the good life. Good food, seconds of dessert, fancy dinner parties. On occasion, I’ve wondered whether he might have been (or maybe that should be “is”?) a meat-eater. Okay, that’s an unlikely theory…. like elephants themselves, the gods have to be vegetarian. Or so I’m told. He probably tipped back the occasional cocktail though. They don’t call it ambrosia for nothing.

But girlfriends? That thought certainly never crossed my mind. Until now.

I’d never seen these two particular paintings until recently, but its artist, Raja Ravi Varma, is without a doubt, one of India’s most famous painters. He was born simply as Ravi Varma in 1848 in the Kilamanoor Palace in the princely state of Travancore in Kerala, India. He wasn’t born a prince but after a maharajah recognized Varma’s talents at a young age, Varma received the maharajah’s patronage as well as training under accomplished artists, such as Dutch portraitist Theodor Jenson, and eventually the title of “raja” from Lord Curzon, Britain’s viceroy to India.

Varma melded traditional Indian subjects (particularly South Indian women as well as mythological characters) with European artistic styles. He achieved widespread fame after winning first place at the Vienna Art Exhibition in 1873 followed by two gold medals at the World’s Columbian Exhibition in Chicago in 1893. He was India’s most popular artist in his own time, and his work remains extremely popular even today.

Take a look at some of his pieces (and tell me these don’t remind you of something you might see hanging in the western art wing of the Met or even painted on the ceiling at the Sistine Chapel): 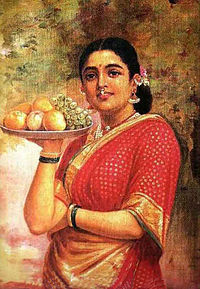 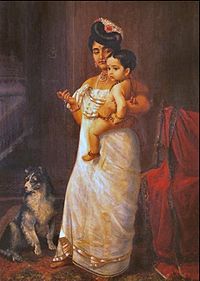 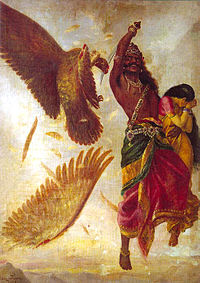 These are among the many popular paintings Varma rendered in his lifetime, reproductions of which are often seen in Indian homes, coffee shops, book stores – even on stationary.

The paintings of Ganesha’s gals? Less common. Maybe because some folks would consider them inappropriate. So what’s the story? Did Varma just imagine Ganesha with some mojo or is there any historical basis to these renderings?

Turns out, if Ganesha had a Facebook status, it would be “It’s Complicated.” Religious scholars have differing theories on his relationships or lack of them. Unlike other major deities with goddess-wives, Ganesha is not associated with any particular consort and is typically considered a bachelor. The most prevailing myths show him as a sort of brahmacharya, a kind of celibate spiritual leader. Another pattern of myths, however, associates him with buddhi (intellect), siddhi (spiritual power), and riddhi (prosperity), and occasionally, these concepts are personified as goddesses considered to be Ganesha’s wives. Varma’s second painting from the top is entitled “Riddhi Siddhi,” representing two of those three wives. In some modern retellings, he’d fathered Santoshi Ma, the goddess of satisfaction, with them.

Then there’s the Ashtasiddhi – the eight spiritual steps achieved through yoga. The very first Varma painting up top is called “Ashtasiddhi Ganesha” and shows these eight steps or concepts as young women who surround Ganesha. But don’t read into it. It’s only a spiritual love. Of course.

There are other theories and variations, mostly depending on region and/or linguistic group, that show Ganesha with any number of females who embody his spiritual attributes. One story shows him having sons by Siddhi and Buddhi. Another says the two female deities are shaktis, divine creative forces personified as female. Yet another ancient tome specifically calls them his “wives.” In some ancient artistic depictions, he’s shown with only one shakti, with no distinct features, so it’s unclear who she might represent other than as a general consort.

Regardless, it’s hard to imagine any of these versions are quite as provocative as Varma’s very modern ones. What do you think?
Posted by Supriya Savkoor at 7:00 AM