Off The Beaten Track: Earth-Friendly Eating 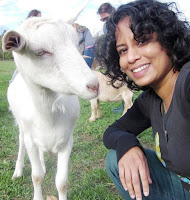 Our guest this week is Lavanya Sunkara, an Indian-American freelance writer living in Long Island, New York. Her work has appeared in Salon, Time Out, Petside, Yahoo! Shine, NY Resident, and Yourtango, among others. When she is not reading or outdoors with her dog, Lavanya is organizing volunteer events, exploring New York with her friends, and planning her next trip to somewhere exotic. In this post, Lavanya shares her story of how she became a vegetarian. She wishes everyone a very happy Earth Day. Read more of her articles at www.lavanyasunkara.com.

There’s been much talk about Natalie Portman giving up veganism to cater to her pregnant needs. The moment I read the headline, I feared she’d given it up entirely and decided to eat animals again. As a meat-eater turned vegetarian myself, I had a hard time believing someone that outspoken about animal rights would suddenly give up her ideals and start eating hot dogs and chicken wings. To the disappointment of vegans, she has taken up eating eggs and dairy. I can’t say I am completely against her decision, especially since I too consume those products, albeit in very limited amounts. But one thing that I will never ever do is eat meat again. 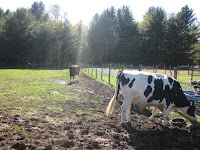 As a Hindu, I never ate beef or pork in all my 30 years. My mother, who is a lifelong vegetarian, has cooked chicken and lamb occasionally for the rest of the family, but I gave up eating them ten years ago. Relinquishing seafood is still a bit hard for me, but I went from eating it once every few months to every six months in the past few years. Starting this Earth Day, I’ve decided to give it up completely.

Some may wonder why a personal eating choice has a global effect. I can say that if we all turned vegetarians, we would have no torture of animals in slaughter houses, no pollution-causing factory farms, and no minimum wages and horrible working conditions for food production employees. Also, the amount of food, water, and energy used to raise 10 billion animals for human consumption would be used to grow food for the hungry in this world.* Alas, that's a dream that may never come true. But still, I am making a choice to contribute to a cruelty- and pollution-free world. 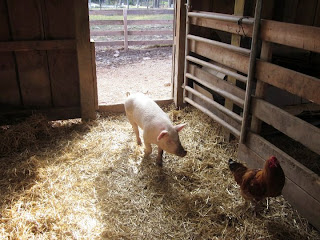 People sometimes ask me if I am getting a healthy diet based solely on fruits, grains, and greens. I do. So does my mother and millions of vegetarians and vegans on this planet. My grandmother gave birth to six kids and lived healthy well into her late seventies on a strictly vegetarian diet, in a small village in India. She continues to be my source of inspiration and strength. Of course, the meat industry continues the propaganda of animal flesh being healthy for humans, when in fact it’s known for increasing obesity, heart disease, cancer, reproductive disorders, liver and kidney disease among other ailments.*

Ardent meat lovers argue that animals are put on earth for us to eat, and thus it is okay to confine and abuse them, inject hormones and antibiotics, and kill them for our satisfaction. Some friends of mine have debated with me that since cavemen hunted animals back in the day and we've climbed to the top of the food chain, meat eating is justified. I have some news for you—this is the 21st century. Today, the modern hunter-gatherer simply drives a few blocks to the supermarket, picks out a packaged meat product, cooks it on an electric stove, and calls it a feast. I would like to know how these people would fare out in the wild, fending for themselves among the beasts. I’ll give more value to their stance if they risked their own lives and hunted food with their own bare hands. 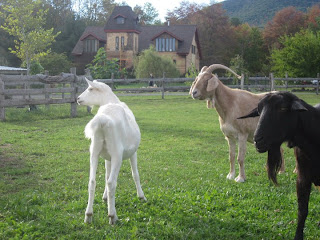 Of course, there are always those who tell me they just can’t give up meat, either because they grew up with it, or they succumb to their bodies’ cravings. I too have experienced it at one point. There was a time I used to look forward to going my aunt’s house for her spicy goat curry. When I gave up meat, I sorely missed the curry. Until one day I read a story of a baby goat that escaped from a farm truck. She was black and white, with light blue eyes and perky ears. She was adorable, almost puppy like, and she deserved to live. I knew then I had made the right decision.

Last year, during a visit to the Woodstock Farm Animal Sanctuary** in upstate New York, I came face to face with these gracious goats. In the sanctuary that is home to more than two hundred rescued farm animals, we met with happy cows, rubbed pigs’ bellies, hugged turkeys, and played with the friendly goats. Two young pearly white goats, named Jacob and Edward by a Twilight fan, came near me for some petting. I rubbed their backs and chatted (a habit I formed thanks to my dog), as their golden eyes glimmered. I could tell they were basking in the attention. When I sat next to them, the younger one raised his front leg and patted my thigh a few times, just like my pet dog does, as if trying to communicate with me his gratitude. It was such a simple act, yet so endearing, showing acknowledgment and emotion. At that moment, I knew I made the right decision not just for myself, but also for my fellow animal friends and for the sake of this planet.

**Woodstock Farm Animal Sanctuary: To plan your visit, go to www.woodstocksanctuary.org.
Posted by Supriya Savkoor at 7:00 AM