The Legacy of a Romance – Nehru and Lady Mountbatten 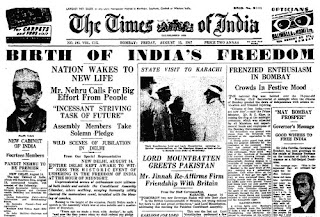 Hands down, the most pivotal moment in India’s modern history was its independence from the British empire, which took place at the stroke of midnight on August 15, 1947. The freedom struggle had juggernauted toward that goal for at least a hundred years. But once freedom was won, it was a bittersweet victory, with British India, the jewel in the crown, torn into not one but two countries, India and Pakistan, like twins born at the same hopeful moment then violently separated.

That’s because despite their shared ancestry and heritage, Hindus, Sikhs, and Muslims on both sides of the border erupted into violent clashes. More than 12 to 15 million people were displaced, becoming refugees, and crossing a border into a new country and new world order where they knew no one, had no roots or safety net – all because of communal (religious) riots, fear mongering, and forced uprootings. It's considered the largest migration in history, and the anger and bitterness over the events of that time still fill people on both sides of the border with much passion, mostly enmity.

Historians say much of the blame can be placed on Lord Louis Mountbatten, India’s last viceroy and, after independence, its first governor-general. Mountbatten, who 30 years later would be assassinated in Ireland in an IRA bombing on his fishing boat, was Prince Philip’s uncle (that’s Prince Philip, as in Queen Elizabeth’s husband) as well as mentor to the young Prince Charles and "honorary grandfather."

A British statesman, naval officer, admiral of the fleet, a member of the British Royal Family, and the anointed Earl Mountbatten of Burma, Louis Mountbatten was sent to India by Clement Attlee, the prime minister of the UK, to India in 1947 to oversee a swift transfer of power from the British to the Indians no later than 1948. As World War II in particular had taken a huge toll on the Brits, financially and otherwise, Attlee had two priorities for Mountbatten – make the transfer quick and painless, keeping Britain’s reputation as untarnished as possible. The directive would prove to be disastrous, leading pretty much directly to the terrible rioting and displacement of so many.

Lord Mountbatten and his wife, British socialite and heiress, Edwina (nee Ashley), moved to India in 1947, and almost from the get-go, struck up a close friendship with Jawaharlal Nehru, the then-leader of the Indian National Congress, who would soon become the first prime minister of independent India. By this time, Nehru, an Anglophile who’d been sent to London for his schooling, was a widower, responsible for his young daughter, Indira (who would decades later become prime minister herself), and carrying the weight of his nation’s future on his shoulders. He’d been mentored by Mahatma Gandhi himself, rising to Congress president under Gandhi’s guidance, and widely seen as his political heir.

Though it’s more of a footnote to history, it is widely believed that Nehru and the vicerine were romantically involved. There’s certainly no doubt of their close friendship, which Lord Mountbatten knew of but either turned a blind eye to or else just accepted.

They made an odd pair, Nehru and Edwina, and not just because of the cultural differences.

Lady Mountbatten was a beautiful, glamorous, and very rich heiress, a countess who’d descended from earls and barons. She’d largely lived a life of leisure, and despite two young daughters, she and her husband had an open marriage in which they both had many affairs, some scandalous.

Nehru, on the other hand, hailed from a political family, and had spent his entire career in the pursuit of India’s independence, building his reputation as a hard-working, unflagging nationalist.

And yet, the countess spent endless afternoons with the handsome and charismatic politician, chatting about everything under the sun as well as sitting together in long stretches of comfortable silence. Though the Mountbattens lived in Delhi for only a few years, Lady Mountbatten visited India at least once or twice a year till the end of her life. Suitcases upon suitcases of letters to her from Nehru have been the subject of several books, including one by her daughter Pamela. (Check out this fascinating interview of Pamela on the topic from only a few years ago.) Lord Mountbatten himself once wrote to Edwina’s sister of how his wife and the would-be prime minister “are so sweet together, they really dote on each other.”

Did they or didn’t they seems to be the question many want to ask, and those who’ve read the letters say they probably didn’t. But many of the letters include exchanges of affection and longing, counting the days till they would get to see each other next. Historian Alex von Tunzelmann wrote in her 2007 book on the subject that Lady Mountbatten had written a letter to her husband stating that her relationship with Nehru was “mostly platonic. Mostly, but not always.” (What do you suppose hubby’s response was to that admission? We’ll have to read the book to find out.)

The more intriguing speculation is what powers of persuasion did the wife of Britain’s top representative in India have on India's top politician and powerbroker? Mountbatten himself said on occasion that if he wanted to convince Nehru of something, he would put his wife on the task of broaching it at one of their private meetings. The expedited timetable for independence, negotiations with all the various power players in reaching a consensus, the partition of the two states, the Kashmir issue that remains a huge thorn in regional stability even today.... all these and more were topics Nehru, bogged down by worry and his huge responsibility to his country, discussed with his confidante and possible lover. 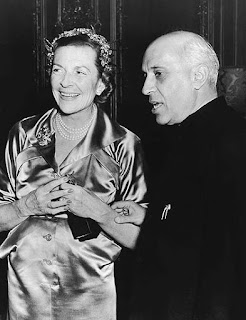 If it sounds like a movie, it almost was. von Tunzelmann’s 2007 book, Indian Summer: The Secret End of an Empire, was set to be adapted into a film starring Hugh Grant and Cate Blanchett as the Mountbattens and Irfhan Khan as Nehru. But plans halted when the Indian government refused to allow filming in the country unless the filmmakers agreed to take out the scandalous aspects about its first prime minister.

But how did it all end? Thirteen years after India’s independence, Edwina, only 58, died in her sleep while on a trip to Borneo, a stack of Nehru’s letters sitting on her nightstand. As the Royal Navy took her body to Britain's southern coast for a sea burial, Prime Minister Nehru sent a fleet of Indian Navy ships to cast a wreath into the water on his behalf. He died barely four years later.
Posted by Supriya Savkoor at 7:00 AM