The Sun Also Rises - Over the Lion of Persia

When I go to Iran, I often feel like I'm drowning in symbolism. There are the usual Islamic and pre-Islamic symbols everywhere, from the four crescents framing a sword on the Islamic Republic’s flag to the fire-and-water representations I blogged about here. Sometimes, even conversations feel symbolic when I suddenly realize the topic I thought we were discussing turns out to be something entirely different, filled with hidden meaning.
One of the most striking Iranian symbols is the shir-o-khorsid: a lion defiantly gripping a sword in one paw, with the sun rising out of its back. It makes you stop and think, doesn't it? What does the ascending sun mean? And what's with the anthropomorphic image of an animal holding a human weapon? This is where history and symbolism come in.
The Lion and Sun symbol goes back centuries, perhaps even millennia. The first known instance of the image comes from a coin that dates to 333 B.C. and was struck to honor the governor of Babylon (which was once part of Persia). In this depiction, the sun rises over the lion, but the beast lacks a sword.
The emblem’s association with Persia began in the 14th century, during the Mongol-led Timurid dynasty. The rulers of this period brought the tradition of sun worship to Iran, where the lion had already been a symbol of Persian kingship, dating back to ancient times. Back then, the Achaemenid kings (550—330 BC) adorned their royal garments and ceremonial cloths with embroidered designs showing a lion, though without the sun rising out of its back. So the later Timurids just put the two ideas together and came up with an entirely new meaning.
The lion’s sword was added after the arrival of Islam, and the symbolism underwent a shift during the Safavid period (1502—1722). To the Safavids, who introduced the Shia branch of Islam to Iran, the sun came to represent Jamshid, the mythical founder of the Persian empire, while the lion symbolized Ali, the chosen successor to the Prophet Mohammed as Islam’s top religious leader (from the Shi’ite perspective, anyway). The monarchs of this dynasty saw themselves as both spiritual and political leaders of their people, so it makes sense that they would combine the kingship motif with a religious interpretation. The Safavid rulers were the first to put the Lion and Sun emblem on the national flag (although the background was entirely green, unlike the later tricolor of green, white, and red).
The symbolism underwent another shift during the Qajar dynasty (1785—1925). According to the Qajars, the lion represented Rostam, the hero of the Shahnameh (Book of Kings), a 10th-century epic poem by Ferdowsi that recounts the heroic deeds of historical and mythical Persian rulers. In doing so, they lent the emblem a nationalist meaning, representing not only the monarchy but Iran itself as a political entity. The Qajars made a few other changes, too. They added a crown above the sun and decreed that the lion’s weapon represented Zulfiqar, the sword owned by Imam Ali.
The Pahlavis, who took power in 1925, kept the essential elements of the Qajars’ Lion and Sun, only they removed the face from the sun and changed the Qajar crown to one that more closely resembled their own. The nationalist symbolism remained until the 1979 Islamic Revolution (and is still embraced by some expatriate groups). The emblem adorned the Iranian national flag from 1965 to 1979.
After the Islamic Revolution, the clerics abolished the Lion and Sun, banning it as the symbol of the monarchy they had overthrown. They replaced the emblem on the flag with the current red crescent-and-sword design and removed the Lion and Sun from all public spaces – although they missed a few images, like this one on a mosque in Kashan: 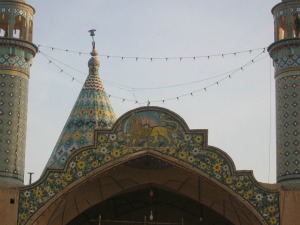 Today, most Iranians agree that the Lion and Sun design represents the monarchy, and it has become a sign of defiance and opposition to the regime, even among those who don't wish to see the mullahs replaced by another shah. Which doesn’t mean that all those opposed to the Islamic Republic are eager to see the Lion and Sun back on their national flag. The debates over symbols can be as fierce as the ones over what political system people would like to see: a monarchy or a republic.
As a non-Iranian and free of the burdens of history, I can appreciate the Lion and Sun in a much more neutral way. I find the emblem rather pretty, and I like the idea that it is neither entirely pre-Islamic nor Islamic but has collected meaning and images from every historical period through which it passed. This motif should be a symbol of unity, not one of division. Maybe that day will still come.
Posted by Heidi Noroozy at 7:00 AM