Off the Beaten Track: Native Traditions of Giving 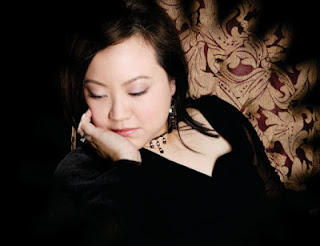 After living in Alaska for seven years, Leslie Hsu Oh returns to the Washington, D.C., area with a wealth of adventures from the Last Frontier. Her work appears in Cirque, First Alaskans Magazine, Fourth Genre (forthcoming), Kids These Days!, Rosebud Magazine, Stoneboat, and Under the Sun. “Between the Lines” was listed as a Notable Essay in The Best American Essays 2010. She received an MFA in creative writing from the University of Alaska Anchorage, where she currently teaches, and a master’s from Harvard University. Check out her web site (www.lesliehsuoh.com) or find her on Facebook.

My four-year-old son runs down the hall wailing, “Jiĕ Jie [Older Sister in Mandarin] ate all the grapes and didn’t share any with me.” My seven-year-old tries to defend herself, but the evidence is bulging in her squirrel cheeks.


“Kyra, what happened?” I shake my head with disappointment. A year living in the Washington, D.C., area and already they had forgotten an important lesson they learned from Alaska Natives since birth.

It was my way of simulating the old days, when daily, children could gather at the foot of an Elder after dinner and listen to his or her stories. At a minimum, I hoped that my children could understand the importance of giving, unmarred by the Western expectation for something in return.

In the Yup’ik video, Alice Rearden (Cucuaq Aluskak) speaks about ella, or awareness. Growing up in Napakiak, her Elders taught her “that if you are out walking and see a piece of driftwood sticking out of the mud, you should pull it out and turn it over so that the muddy part can dry. That piece of wood is alive and aware, and it will feel gratitude for your kindness.”

Her features are delicate, but when she speaks, her voice is laced with the weight of more than 12 years of wisdom, gleaned from serving as lead translator for the Calista Elders Council. The video pans to a scene of fish hanging on a dry rack while Rearden says off screen: “We always grew up with that sense, of not putting yourself first or above others. Giving gifts to people, those kinds of, you know, unselfish gestures that you do for people—it will come back in turn.”

Working with cultural anthropologist Ann Fienup-Riordan, Rearden, who is now 35, translates books such as Ellavut: Our Yup’ik World and Weather, the ninth in a series produced by the Calista Elders Council to document Yup’ik oral traditions. Yup’ik Elders explain that "those who are capable must help those less fortunate through sharing food and doing chores for them. We were admonished: ‘Even though an old woman wants to pay you, you do not receive it.’ When an elderly woman or man is given something or helped, she is extremely grateful and thanks you with enthusiasm. And they give the person who helped them something beneficial, thinking of something in their minds that will aid him positively in his life.

“Yup’ik discussions of the ethics of sharing describe its consequences in terms of its nonmaterial return—the grateful thoughts it elicits.…Today, sharing knowledge is as critical as sharing food in both the transfer and transformation of Yup’ik moral standards. Admonitions to act with compassion and restraint remain foundational not only in Yup’ik interpersonal interaction but in their relations
with their environment.”

In Anchorage, the sharing of subsistence foods has become the warp thread weaving together Native and non-Native communities. While dip-netting, I always collected fish heads from non-Native neighboring fishermen and delivered them to Elders whom I worked with in town. During holiday seasons, the post offices are bustling with ice boxes packed with subsistence foods that are being mailed to the Lower 48.


As a mother of three, Kyle (13), Kayla (11), and Christopher (4), Rearden trades ideas with me on how to teach our kids tuvqakiyaraq, the custom of sharing, in an urban setting. Rearden grew up “feeling shame to get more than someone else. Whenever I was asked to share, I always gave the other person a bigger piece. I would cut a candy in half and be ashamed to take the bigger piece.”

She raises her children, who were all born in Anchorage, with these ideas: “The more you give, the more you get back. If we are stingy, like if you don’t share your toys, then [they] will break right away. When you give, it will come back to you. Your selfless act is always rewarded. They see that I don’t hold back when it comes to helping in any situation. I hope they [her kids] watch me and observe what I do.”

Because it is hard to keep traditions like tuvqakiyaraq in the city, Rearden goes out of her way to share food. She often hosts feasts where she cooks all day, serving her most precious subsistence foods, making sure her kids see that she is serving her last bag of salmonberries. She says, “it’s just enough for them to see. I am always talking to them and explaining the reasons behind sharing, the reason why it’s important to give to others and have compassion for others.”


With the holiday season upon us and this month being Native American Heritage Month, I take an apple out of the refrigerator and cut it in two. I present both pieces to Kyra.

Smiling mischievously at me, she snatches both pieces and presses them to her heart. Ethan starts to stomp his baby feet anxiously. “What will you give me in return?” she asks her pouting brother. Then, seeing the color drain from my face, she says, “I’m just kidding, Mom,” and deposits the largest piece in his little hands.