In May 1992, I visited Florence as an American tourist. As I left my hotel at dusk on May 23, I encountered a march through the streets. It was eerily silent. No chants. No music. Flaming torches and somber faces snaked through the Florentine streets. It turns out that similar marches wove their way across Italy to show respect for an anti-Mafia judge who died earlier that day in Palermo, Sicily. Giovanni Falcone is a modern-day warrior who relentlessly pursued the Mafia and was blown to bits by a roadside bomb for his trouble. 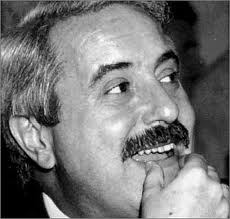 Born in Palermo in 1939, Falcone grew up with future mafiosi and at least one other future judge as playmates. Educated in the local classical high school before studying law, he was appointed magistrate in 1964. Falcone played a key role in investigating some of most famous Mafia-related cases of the time.

In the early years of his career, he worked on bankruptcy cases, eventually linking Mafia criminal actions with payouts and bribes to politicians and high-ranking government officials. He was known for his attention to detail and copious notes; working without a computer, he detailed data retrieved from studying multiple bank records. This work led to numerous prosecutions and convictions, putting Falcone in the crosshairs of the Mafia for the first time. He is credited with pulling together various arms of the Italian criminal justice system which, prior to Falcone, had operated independently of each other.

Using the “follow the money” skills he had honed on the bankruptcy cases, he traced the Marseilles heroin labs uncovered in the “French Connection” to their new locations in Sicily. The web of crime touched Turkey, Switzerland, and Naples. The money trail led him to Mafia connections in New York. Soon, Falcone began working with U.S. law enforcement, first with Rudy Giuliani (then U.S. attorney, and later New York City mayor) and Louis Freeh (then a New York prosecutor who later became director of the FBI). This work led to uncovering the famously complex “Pizza Connection,” whereby drug and other Mafia money was being laundered in New York pizza restaurants. Here, too, his focus on cooperation led to increased international crime solving.

This period saw intense Mafia violence in Sicily. Various judges and police commanders were assassinated, and Falcone—a long-time member of a crack anti-Mafia pool of judges and prosecutors—rose to lead the squad. The team’s membership included Falcone’s life-long friend, Paolo Borsellino, who had kicked soccer balls with him and the future mafiosi in Palermo' Piazza Mangione decades earlier.

Because the death threats were frequent and credible, Falcone and his team worked in a bunker-like space beneath the judicial offices in Palermo. He was accompanied by bodyguards wherever he went, and his home was equally secure. Borsellino lived and worked in the same conditions. Falcone often said, "My life is mapped out: it is my destiny to take a bullet by the Mafia someday. The only thing I don't know is when." Borsellino was equally fatalistic. “Giovanni's my shield against the Mafia,” he said. “They'll kill him first, then they'll kill me.”

Together with the team, Falcone and Borsellino pursued their investigations which led to the “Maxi Trial” of 1986–87. In this trial, 400 defendants and 8000 pages of indictment yielded 342 convictions totaling 2,665 years in prison. The case hinged on testimony by informants. Perhaps because he kicked soccer balls with some players as a child or perhaps because their shared background meant he spoke their language, Falcone was able to wrench testimony from many. One of these, Tommaso Buscetta, had fled to Brazil where Falcone pursued and interviewed him. After giving Falcone valuable information, Bruscetta told him, “This will make you famous—and bring your death.” Buscetta later went into witness protection in the United States.

The strength of his security team made assassination difficult for his foes, but as Falcone had predicted, the Mafia got him in the end. They planted a half-ton of explosives under a bridge to the airport that he would drive over. Detonated by remote control, the bomb killed Falcone, his wife, and three bodyguards. And true to his prediction, Borsellino, along with five police officers, was taken out by another car bomb 57 days later on July 19.

Both men have been awarded Italy’s highest civilian honor, the Medaglia d’oro al valore civile (Gold Medal for Civil Valor). Streets and piazzas throughout Italy bear their names. For the tenth anniversary of Falcone’s murder, Nicola Piovanni, winner of the Academy Award for the musical score of La Vita È Bella, Life is Beautiful, wrote a commemorative piece performed at a memorial service in Palermo. In this, the twentieth-anniversary year, both Falcone and Borsellino have been honored across the country. And I remember those flaming torches and silent, somber faces in Florence.

I blog on alternate Thursdays on Italian Intrigues. Next week, I’m blogging about rosemary.