What could be more British than afternoon tea with cucumber sandwiches and cake? There might be other things served as well, scones or buns, sandwiches with fillings of fish or meat, but the cucumber variety is de rigueur. However difficult they are to eat with their leaky, slippery filling, cucumber sandwiches are as British as, well, the Queen. 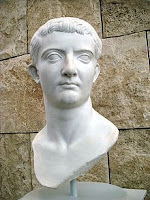 So how did it all start? Cucumbers, it seems, first traveled to Britain with the Roman invaders (ca. 43-400 AD). By the time their conquest began, cucumbers were standard fare in Rome. The Emperor Tiberius (42 BC–37 AD) was a great cucumber lover. Pliny writes that he ate them every day. In fact, Tiberius created movable frames mounted on wheels that could be rolled into the sunshine and moved back to protected space during the cold. This device enabled him to eat cucumbers year round, a precursor to the modern greenhouse.

Cucumber sandwiches did not appear on the scene until long after the Romans departed. Anna, seventh Duchess of Bedford, began the custom of afternoon tea in the early 19th century. A greedy gal, so the legend goes, she found it impossible to wait until dinnertime and had her servants prepare a snack for her in mid-afternoon. Her friends duplicated her repast, and a tradition was born. By the height of the Victorian era, afternoon tea had become an ingrained habit, and these little cucumber treats ruled the tea table. 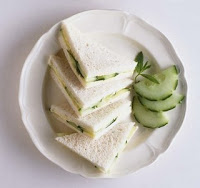 Proper cucumber sandwiches have three ingredients: thin slices of dense white bread with the crust removed, butter, and cucumbers slices—also thin. The first time I saw someone British make them, she spread butter on the unsliced bread before cutting it. This method, she explained, allowed her to cut thinner slices which would have crumbled if she had tried to spread the butter after cutting. The cucumbers are placed on the buttered bread and topped with a twin. Each sandwich is cut in half, usually diagonally, then in half again to produce four small tidbits.

These little bites accompanied tea in the drawing room and on the cricket pitch for a couple of centuries, though the tradition may be waning now. When the British colonized India, they took their cricket with them, though it was some time before the locals were allowed to play. With cricket came the tea break and cucumber sandwiches.

The sandwiches came with the cricket, but not the cucumber. You see, the cucumber is a native of India. It made its way to Rome when trade routes opened between the two during the reign of Augustus, who preceded Tiberius as Roman emperor. So Tiberius was enamored of a new, trendy vegetable when he created his growing frames.

Today, cucumbers are grown on almost every continent and global production in 2010 reached 57,559,836 tons. How they traveled to other countries I can’t say, though probably without armed intervention. They certainly went from India to Rome without military might, but the trips to Britain and back to India again resulted from conquests.

Please join me on alternate Thursdays at Italian Intrigues where I write about Italian food and wine, mystery and crime.
Posted by Patricia Winton at 7:00 AM