Off The Beaten Track: Shamini Flint 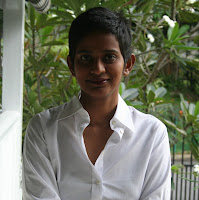 Practicing law in Malaysia and Singapore before becoming a successfully published author, Shamini Flint traveled extensively around Asia for work before resigning to become a stay-at-home mum, writer, part-time lecturer, and environmental activist – all in an effort, she says, to make up for her “evil” past as a corporate lawyer! In addition to writing two excellent children’s novels – Diary of a Soccer Star and Diary of a Cricket God published by Allen & Unwin, Australia and Puffin, India – Shamini also writes cross-cultural crime fiction (our favorite kind), taking her main character – of whom The Guardian says, “it’s impossible not to warm to the portly, sweating, dishevelled, wheezing Inspector Singh” – through Malaysia, Bali, Singapore, and Cambodia to solve all kinds of perplexing murder cases. With the publication of Shamini’s latest novel in this excellent series, her protagonist finally makes it to India, the land of his ancestors. A bit like Shamini, in fact.


“Incredible India!” That’s the advert that’s been running for the last year or so on television here in Singapore and probably the rest of the world too. In it, India casts its spell on a wide-eyed man of Caucasian origin who sums up his experience on a postcard – Incredible India! My feelings about the motherland are far more conflicted so an entire novel – my latest crime fiction, Inspector Singh Investigates:  A Curious Indian Cadaver – hasn’t been sufficient to air my thoughts.

Both my grandfathers arrived by boat in Malaysia (then known as Malaya, which was a British colony) almost a hundred years ago. They settled in a small fishing village called Kuantan and set about carving a future for their children. One was a nurse, the other an estate clerk. Having found jobs, they sent for wives from back home and committed themselves to the production of numerous progeny. Their assimilation was impressive in that they adopted local hobbies – mahjong and badminton – and learnt to speak Malay, the native language of the country. Their daughters were raised to be teachers and the sons doctors. I often wonder whether they thought of themselves as Malayan at this point or whether they assumed, as so many of their peers did, that this sojourn in the tropics was temporary and would end with their triumphant return to their ancestral villages some day. 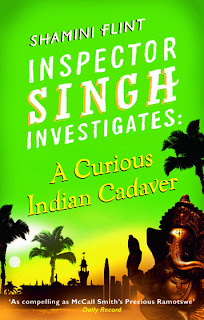 However, when Malaysia became independent in 1957, a choice was forced upon them and both chose to remain, abandoning any dreams of returning to India to accept citizenship of this new land while it was on offer.

Their offspring, the teachers and doctors, produced children who were lawyers and doctors (with a couple of engineers and accountants thrown in), and my grandparents were cremated knowing that they had achieved what they set out to do. All their dreams had been economic – the bottom line was the bottom dollar –  and in the success of the grandchildren, they were content.

Which is how it came to be, that I, a lawyer by training, grew up a Malaysian, unable to speak more than a few words of Tamil or Malayalee (the languages of my grandfathers) and never having been to India. The irony, of course, was that, in multiracial Malaysia where ethnicity determines university places and access to government jobs, my Indian-ness was singularly important. So there I was – an Indian in Malaysia, comfortable with my identity, wont to speak of the depth of Indian culture in a smug tone and to take pride in the Indian economic miracle. I did not go as far as some of my elderly uncles who – sitting pretty in Singapore or Malaysia – would attribute much that was good in the world to India or an Indian.

Apparently, for instance, an Indian discovered gravity long before Newton, penicillin before Fleming and invented the games of rugby, cricket, and football in the village square. My all-time favourite was when an aunt told me in in no uncertain terms, ‘Shakespeare was also Indian, you know.’ And don’t lets get started on Ben Kingsley …

So much vicarious pride! What fine Indians we were! Until the day I made my first trip to India in the late ’80s and discovered I wasn’t Indian at all. There were two dimensions to this. First of all, I didn’t feel I belonged. But more importantly, no one in India thought I was Indian, not even for a moment. My distant relatives were shocked at my short hair and kept asking if I was a boy. They didn’t like it if I went sightseeing on a hot day in case I was burnt any darker by the sun – fair skin being a pre-condition of marriage unless the dowry was to set you back a long way. Strangers pointed at me on the streets because of my short sleeves and jeans. And every single taxi driver overcharged me on the grounds that I was a foreigner and wouldn’t know any better. Finally, I fell ill and spent the rest of the holiday making use of the hotel facilities. I had severe culture shock in the place I had always assumed, in some distant but comforting way, was home.

I’ve been back many times since and India has changed a lot. I’m no longer viewed as an escapee from Mars/the zoo/prison. But this is largely because we have a reached an understanding, India and I. I am just another tourist from some foreign land – like the Chinese or the English or the Russians. From my point of view, I can appreciate the history (as if I was in Rome), the architecture (as if I was in London) and the food (as if I was in Beijing). I am a stranger finding beauty and culture and inspiration in a complex and fascinating land. But I know that I’m not an Indian anymore, and that is a huge loss.
Posted by Supriya Savkoor at 7:00 AM