From All Gods to One—The Roman Pantheon 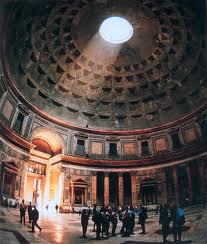 One of my favorite buildings in Rome is the Pantheon which happens to be the city’s oldest, intact one. An architectural marvel, the building’s vast dome spans 43 meters (142 feet) and rises 43 meters, the perfect sphere within a cylinder. I’m awed by this dome, the largest in the world for more than a thousand years until Brunelleschi built the one for the cathedral in Florence. Michelangelo studied it when planning the design for St. Peter's dome.
This area of Rome stood outside the city proper during ancient times. While horses and sheep grazed, the army trained there, giving it the name Campus Martius--dedicated to Mars, the Roman god of war. Legend suggests that a temple to Mars stood on the site at some point, but there’s no proof. Emperor Marcus Agrippa built the first Pantheon, a rectangular structure dedicated to pan theos, “all gods,” in 27 BC. The Great Fire of 80 AD consumed this temple along with many neighboring buildings. Emperor Domitian quickly rebuilt it, only to have it struck by lightning and burned again in 110 AD.
Emperor Hadrian (known for erecting Hadrian’s Wall, the northern border of Roman Britain) constructed the current temple in 125 AD. Apparently mindful of fire, Hadrian crafted this building from concrete.
A 22-meter (72-foot) circular wall supports the dome. Huge niches along the wall originally held statues of Roman gods, the round design ensuring that no god stood higher, and thus more important, than the others. Today, the niches display a motley collection of statues, frescoes and tombs. The building’s only light source is a 8.2-meter (27-foot) open oculus in the center of the cupola.
For its first couple of centuries, the building functioned as a pagan temple. Worshipers burned animal sacrifices at the center, where smoke escaped through the oculus, and they honored the statues in the niches.
During this period, Christianity began emerging as a religion that threatened the status quo. The early Christians refused to revere the Roman gods or recognize the emperor as divine. Nor did they pay the Ficus Judaicus, a tax Jews paid to gain exemption from pagan worship. As a result, anti-Christian sentiment grew, and mobs in Rome began stoning suspected Christians in the streets.
This persecution was mostly random, but by the mid-third century, it became codified; Emperor Decius ordered commissions seeking written certification that every citizen across the empire had burned a sacrifice to the gods. I have seen no suggestions that some Christians may have been forced to burn sacrifices in the Pantheon, but it wouldn’t surprise me.
And then the tables turned. In 312, Emperor Constantine the Great converted to Christianity after dreaming about the religion on the eve of a battle, which he subsequently won. He set about transforming the empire into a Christian state. By 346, law prohibited pagan worship, and ten years later, most pagan temples had closed.
The Pantheon sat empty and unused for two and a half centuries. Unlike many other pagan temples, it survived destruction. Its architectural grandeur probably protected it: it has no windows, it’s difficult to open because of its massive doors, and it was built almost entirely of concrete. Even vandals couldn’t storm the fortress.
In 609, ownership of the building shifted to Pope Boniface IV, who converted it into a Catholic church, consecrating it as the Church of Saint Mary and all the Martyrs. The Pope removed the pagan statues and installed an altar opposite the door. Mass is still celebrated there, and weddings occur regularly. While there is a small sign by the entrance naming the church, the massive carving on the portico, dating from Hadrian’s day, still proclaims it to be the Pantheon.
The painter Raphael and the composer Arcangelo Corelli are entombed in two of the Pantheon’s niches as are Italy’s first two kings following the country's unification. Like so many other facets of Italian life, the secular and the divine combine here with a military honor guard protecting the royal tombs, even within the walls of the church.
I am drawn to this building, awed by its architecture. Even when it’s full of tourists, it feels quiet and restful. Once, I encountered a church choir, from North Carolina I think, that had arranged themselves in a circle beneath the oculus. They had apparently sought permission to perform but had been denied. So they sang, standing under the dome, just for the joy of it. Worship, indeed.
I blog every Monday at Italian Intrigues  This week I blogged about the She-Wolf, the symbol of Rome and it's copy in Georgia.
The photo of the interior of the Pantheon comes from East Tennessee State University.
Posted by Patricia Winton at 7:00 AM