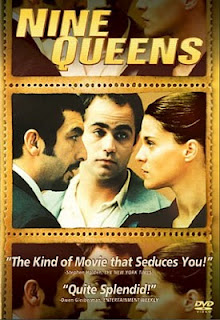 Alli's still gallivanting around South Australia (some people have all the luck). Here's a repeat post from March 2011 (and Alli still stands by this movie!).

I’ve never been one to pay much attention to awards. Sure, they’re nice, but as with anything to do with the arts, they are subjective. Back in 2000 I discovered Nueve Reinas (Nine Queens), an Argentine movie that had won 21 out of the 28 film awards they’d been nominated for. Investing a couple of hours of my time to watch this movie appealed to me, and I’ve now lost count of how many times I’ve seen it and discovered something new.

I will give full disclosure by saying I’m a sucker for heist and con-man movies. I’m also into movies and books that make me want to go back and study it in further detail so I can find those little pearls that weren’t obvious the first time around (The Sixth Sense is a classic example.) Nueve Reinas is another instance where knowing the ending will give you new insight and appreciation for the clever writing, acting, and directing when you watch it again.

Set in Buenos Aires, the film opens in a convenience store. Juan, a young con artist, successfully scams the cashier but on a second go with the con, Juan messes it up with the new cashier on the next shift. Marcos has been observing Juan and poses as a detective, hauling him out of the shop and out of trouble. When Juan discovers Marcos is a fellow conman, he tries to enlist him as a mentor. Up until now, Juan has been conning small time but he needs to go large. If he can pull off a big scam then he’ll have enough money to bribe a judge to reduce his father’s jail sentence from ten years to six months.

At first, Marcos knocks Juan back, but then relents and takes on the protégé, and that’s when they learn about the Nine Queens—valuable stamps and this is where the movie really gets going. I will leave the plot description there for fear of ruining the story for those who haven’t seen this amazing movie. I will add, however, there is a wealthy widow with dubious motivations, a smuggling Spaniard, and Marcos’s estranged sister, Valeria, who can easily blow the con if she chooses to. Valeria almost steals the show with her femme fatal strut and pout. Mix this in with an ending you’re not likely to see coming, and Nueve Reinas is a wise investment of cinematic time.

Then there’s Buenos Aires, a gorgeous city. It has some dodgy areas, of course, but the architecture, plazas, gardens, and waterfronts give the Paris of the Americas a special beauty. None of this is clearly shown in Nueve Reinas which is a tad disappointing. It certainly would have been a great way to show the city at its best but what this movie does do brilliantly is depict the Argentine sensibilities and humor while running with one storyline and having another, more complicated story, simmer just below the surface.


It’s the three-dimensional characters that are the catalyst for plot twists and will have you scratching your head long after a new turn appears. Unfortunately, the film’s director, Fabián Bielinsky, passed away in 2006. Nueve Reinas was the first of two films he made, and I can only imagine what gems of Argentine cinema he would have produced if he were still around. The film’s actors--Gastón Pauls, Ricardo Darín and Leticia Brédice--are still contributing to the burgeoning South American film industry that is attracting attention from around the world.

And to entice you just a little more to hire or buy the movie, here’s the trailer.
Posted by Alli Sinclair at 7:00 AM