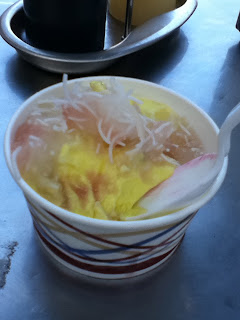 “Once in a time and a place little known lived an old farmer named Mashti Malone. And though he worked his poor hands to the bone, nothing would grow in his land except stone…”

Every time I hear this little ditty, I get a craving for ice cream. Not just any ice cream but Persian bastani. And not just bastani but makhloot, the reigning queen of Iranian street food.

The other half of makhloot is faloodeh, a rose-water sherbet made with delicate vermicelli noodles. Faloodeh is served in one of two ways: ba limoo (with a splash of lemon or lime juice), or ba albaloo (with a drop or two of sour cherry syrup). Either way, the dessert has an amazing mouth feel. The sherbet part melts instantly on your tongue, leaving al dente noodles behind.

In Iran, you buy makhloot from tiny sidewalk shops. Often the only choices are saffron bastani and faloodeh (which you can also buy separately). Other shops serve a variety of ice cream flavors as well. The dessert is scooped into small, plastic dishes and passed through the window. You then go on your merry way slurping bastani and faloodeh as you go. Or you find a sidewalk bench for the fascinating entertainment of people watching (one of my favorite pastimes anywhere in the world).

Sometimes, the bastani/faloodeh combination is punched up with additional ingredients: bits of fruit jello, banana slices, chocolate chunks, chopped nuts, and whipped cream. The result is a kind of Persian sundae.

If you happen to visit Shiraz, here’s a tip: go to the Aramgah-e Sa’adi (tomb of the famous poet, Sa’adi) and ask someone to direct you to the nearby faloodeh shop. I don’t remember the street or the name of the shop, and it is the kind of place you’d easily miss if you blinked while passing it on the street. It occupies a tiny space in a gray building behind the walled garden that surrounds Sa’adi’s tomb. But the faloodeh is the best this side of paradise.

You don’t have to go to Iran to enjoy a dish of excellent makhloot. Just head for Los Angeles, home to a wonderful little ice cream shop called Mashti Malone. Remember that snippet of bad poetry I quoted above? Yes, that Mashti Malone.

But first a bit of history: The Mashti Malone ice cream shop is owned by Mashti and Mehdi Shirvani, two brothers from the northeastern Iranian city of Mashhad. In 1980, Mashti bought an ice cream shop called Mugsy Malone on the corner of La Brea and Sunset in Hollywood. Because he had little money left over for a brand new sign, he simply replaced “Mugsy” with “Mashti,” and a legend was born.

A few years later, a group of filmmakers were shooting nearby and, inspired by the ice cream shop’s unusual name, penned a tongue-in-cheek poem titled “The Legend of Mashti Malone.” The first two lines are above, and you can read the full poem here.

The Shirvani brothers make delicious faloodeh, but their real talent lies in the bastani. In addition to the traditional saffron and rosewater flavor, they also sell more exotic varieties such as Ginger Rosewater, Orange Blossom, and Lavender.

My favorite combo is traditional saffron bastani and faloodeh with a splash of sour cherry syrup. The bastani’s creamy texture is the perfect foil for the faloodeh’s aching sweetness, creating an unforgettable blend.

What is your favorite street food? What local specialties have you encountered in your travels?
Posted by Heidi Noroozy at 7:00 AM