Off The Beaten Track: Columbus' Anchor 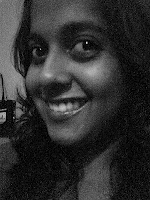 Sangeeta Nancy Boondoo, an attorney with the government of Trinidad and Tobago, is a student of life. She's always on the lookout for something new and interesting to learn and do. She loves to travel, and though she hasn't yet been to India, the land of her ancestors, it's at the top of her list to visit someday. She loves to go to the beach, take nature hikes, and bake. She does not like to cook, but she collects cookbooks anyway, along with all kinds of other books. A girl after our own heart...

It can be difficult to explain to people why a person can like a museum. I know I tried on a few occasions. Why do I like them? Simple. One never knows the treasures and discoveries to be made when a museum is visited!! Last year I visited the National Museum and Art Gallery (Royal Victoria Institute) in Port-of-Spain for the first time as an adult, with all the time in the world to wander around. I “found” quite a few treasures, but one stood out in particular: Christopher Columbus’ anchor. 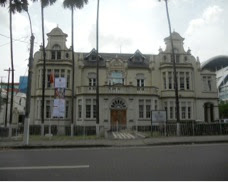 The building is currently under renovation, with visitors having to walk across the southern courtyard to enter. I didn’t mind because it was right around the corner, and in the recent past the building was marked for demolition. The courtyard is rather inconspicuous, and I remember resigning myself to the fact that only in Trinidad would the entrance to our national museum be like this. 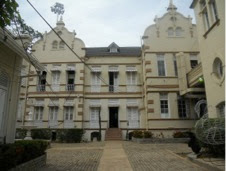 Passing a white, wiry swan as I entered, I was not deterred, certain that at the very least there were a few cannons scattered around the courtyard, and they were sure to entertain me for a while. The courtyard had a surprise though, neatly tucked away in a corner, next to the swan stood a simple anchor with a metal plate inscribed with some writing. I took the pictures first, and then I went in closer to read the writing. This simple anchor, almost blending in with the shrubbery, was said to be the anchor lost by Christopher Columbus along the shores of Trinidad in 1498—and it had been exhibited as such in Normandy, Paris, Madrid, and Chicago. I was excited, and given that I was not prohibited from touching it either by a sign or the knowledge that I would damage it, I admit I did reach out and touch it, imaging to myself the stories this anchor could tell if it were able to.


I left the museum quite happy, having photographed and noted the many treasures housed within but saddened at the difficulties that the museum staff faced in maintaining them. It is sad how little we appreciate our history. 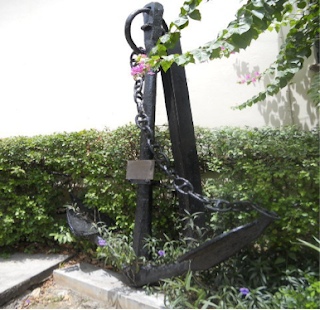 Christopher discovered Trinidad during his third voyage to the new world. The legend is that having sighted land on 31st July, 1498 and seeing three hills, Columbus was reminded of an earlier promise to name the first land he discovered “La Trinity” after the Holy Trinity. La Trinity became Trinidad over the years and has stuck. The three hills Columbus saw are a bit of a myth because that triad of hills which inspired Columbus is yet to be found; fishermen report that in certain conditions they can see the Trinity.


Columbus’ records indicated that he and his crew stopped several times along the Trinidadian coast. On the second day of one such stop, at  “Punta del Arenal,” Columbus and his crew, on noticing a large canoe carrying twenty four Amerindians armed with bows, arrows, and wooden shields, ordered his men to play drums and dance. It was perhaps one of the earliest examples of the tourists not understanding local culture but having done some research, mistakenly thinking that they knew it all. The tourist guides did get it wrong long before the modern-day tourism industry. The Amerindians began showering arrows onto the ships and, according to the records, managed to communicate with a ship captain.

Later that night Columbus stopped somewhere along the coast near modern day Icacos, at a spot in which the sea was apparently rough and lost the anchor of one of his ships.

An anchor bearing the date 1497 imprinted on its stock was discovered in Icacos by one Mr. Agostini whilst conducting excavations on his plantation in 1877. The New York Times reported the find on April 12, 1880, stating that, “...it seems by no means improbable that it crossed the Atlantic on board the vessel which in the following year carried the Genoese adventurer outward upon his third voyage...”.

According to the inscription, the anchor’s 15th-century authenticity was confirmed by the French Societé Des Antiquiaries. Mr. Agostini later presented the anchor to the nation on March 9, 1912 and it has been since housed at the National Museum.

I have always heard that you never know what treasures lie waiting around the corner, and having literally discovered a treasure around the corner, I can’t wait to see what lies behind the next corner!
Posted by Heidi Noroozy at 2:41 PM