Off The Beaten Track: Travels In Iran 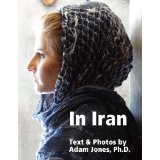 Our guest this week is Adam Jones, Ph.D., Associate Professor of Political Science at the University of British Columbia in Kelowna, Canada. He is the author and editor of over a dozen books, including Genocide:A Comprehensive Introduction (2nd edition, 2010). An avid traveler, Adam has lived and/or voyaged in over 75 countries on every populated continent. In 2012, Adam and his companion, Griselda Ramírez, took a private tour through Western Iran, accompanied by their guide, Mahmood and driver, Samad. Their experiences are documented in Adam’s travelogue, In Iran: Text and Photos, which is available as an e-book. He has graciously permitted us to post an excerpt from the book. The following is an account of Adam and Griselda’s visit to Sanandaj, and Orumanat in Iran’s western Kurdistan Province. More of Adam’s photos can be found on his Flikr site.

Let me confess that I have a soft spot for the Kurds. They are generally considered the world’s largest nation without a state: thirty million or more of them are distributed across southeastern Turkey, northeastern Iraq, western Iran, and a sliver of northeastern Syria.

Their history is a litany of invasion, betrayal, and genocide. Turkey’s 1930s-era campaign against its Kurdish minority killed tens if not hundreds of thousands. Successive Turkish regimes refused to recognize a Kurdish ethnicity, instead defining Kurds as “mountain Turks.”

When Kurdish nationalists rebelled against Turkish oppression in the 1980s, they sparked a counterinsurgency that turned the southeast of the country into a war zone. The conflict simmers and erupts into major clashes to the present day. In Iraq, a Kurdish insurgency supported by the Shah of Iran prompted Saddam Hussein to view the Kurds as a “fifth column” during the war with Iran. The result was the genocidal “Anfal” campaign of February-September 1988, in which at least a hundred thousand Kurds were killed. The murder by chemical weapons of five thousand Kurdish civilians in the city of Halabja in March 1988 was separate from Anfal as such, but part of the broader pattern of anti-Kurdish extermination.

Iran’s Kurdish population, mercifully, has experienced no such slaughter—whether under the Shah (though he betrayed his Kurdish allies in the 1970s by cutting a deal with Saddam), or since the founding of the Islamic Republic. This is despite the fact that most Iranian Kurds are Sunni, in a country where Shias are hegemonic. The millions-strong Kurdish population is widely distributed throughout the west of the country, divided into several groups that speak sometimes mutually incompatible tongues.

In a little over a year, by coincidence and design, I have traveled in all three of the major population concentrations of the Kurdish “nation.” During travels with Griselda in southeastern Turkey in summer 2011, we explored the ancient city of Diyarbakir, where Kurds are in the majority. A fresh wave of Kurdish political agitation and Turkish military repression followed. I will not soon forget sitting out a thunderstorm by the Iranian border with a couple of Kurds who proudly proclaimed their allegiance to the PKK—the principal Kurdish guerrilla group operating on Turkish territory.

Also in 2011, I was invited by the Kurdistan RegionalGovernment (KRG) in Iraq to participate in a conference on the Anfal genocide, held in the city of Erbil, in the long sliver of northeastern Iraq that the Kurds won as a state-within-a-state following the First Gulf War (1990−91). Their quasi-independent status was strengthened after the fall of Saddam in 2003. The Kurdish zone is the lone part of Iraq that has not descended into catastrophic violence since that Second Gulf War. Supplied with a driver and logistical assistance by the KRG and a couple of crucial NGO connections, I was able to travel widely throughout the zone, including to Halabja and its many moving sites and memorials connected to the 1988 chemical attack.

From the start, I was struck by the inordinate hospitality of the Kurds I met, and their personal vigor. Mahmood is fond of them, too. “I had many Kurdish friends when I was doing my military service,” he says as we drive from Takab toward Sanandaj, the heart of Iranian Kurdish culture. “They are serious people. If they say they will do something, they do it. And they grow up with a gun, a Kalashnikov, as their companion.”
.
That military prowess certainly imbues the Kurdish men I’ve met, who frequently seem to have stepped straight from a film set. Kurdish women, too, have a public charisma not often found among Muslim females in the Middle East. Their traditional dress is wildly colorful, and they’re often very beautiful, with the strong jawline and penetrating eyes of their menfolk.

We are on the road from Takab by 8:30 a.m. I alternate between mid-morning snoozing and a perusal of Jack Weatherspoon’s Genghis Khan and the Making of the Modern World. We pass through countryside of adobe villages blending imperceptibly into parched yellow hills and red, recently-tilled soil. There are verdant wheat fields, their fronds rippling in the wind that washes across this austere plateau. The occasional turbaned Kurdish farmer moves through the wheat, scythe in hand. Teenage Kurdish boys hitchhike in little knots at the roadside.

We arrive in busy Sanandaj around noon, and Griselda and I beg off from our guide to stroll the streets on our own. On every block we are greeted in a friendly way, whether by Kurd or Persian: “Hello, how are you, my dear?” is a typical salutation (directed to me). There are striking Kurdish women in brashly form-fitting clothes. It’s remarkable what a difference a belt makes, accentuating the hips and bust. There are dresses for daily wear in the shops that have necklines, and I notice much henna-treated hair. Among the young men, there are cool dudes with rooster-comb haircuts, looking like South Korean or Japanese pop stars.

The streets are packed with commerce, especially agricultural produce: luscious tomatoes, fresh lettuce, watermelons the size of late-stage pregnancies. Griselda is inspired to photograph a few of the Kurdish vendors—all male—and I find myself piggy-backing on her initiative. It’s easier for a woman to ingratiate herself with a female subject, but the men seem positively charmed by her—allowing me to sneak in for follow-up shots.

We lunch at the Jahan Nama restaurant, a glitzy place full of antique swords and pistols and gramophones. Mahmood tries to contact a Kurdish friend of his, so he can join us – another tour guide. But the friend just returned from leading a tour to Armenia. I express surprise—do a lot of Iranians visit Armenia? “Yes!” Mahmood asserts. “Iranian tourists go to Armenia, India, Turkey, Malaysia, sometimes Russia.” Making the most of their limited options, in other words. I imagine many Iranian women abandon their hejab once they cross into these countries, while many men head for the pub.

It’s on for one last, long push into the heart of Iranian Kurdistan. The initial stretch out of Sanandaj is slow going. The road is choked with trucks belching black fumes in our faces. Most are headed for Iraq, and many bear Iraqi license plates. Trade is booming between the two countries—a reminder of the ironic outcome of the 2003 Gulf War, which basically gifted Iran with the Iraqi sphere of influence that Saddam had denied it. Our driver negotiates his way around the obstacles. Soon the road begins to clear, and the vistas open up.

“The Kurds have no friends but the mountains.” It’s perhaps the dictum closest to the Kurdish soul, and entering the precipitous ranges of westernmost Iran, it’s easy to see why. Samad steers us up a frighteningly slender ribbon of highway into a flinty fortress of peaks and valleys. “I took this road once by night,” Mahmood remembers. “At about two kilometers an hour. One mistake and it’s game over.” The road, though, is a real triumph of engineering, and it’s in excellent shape. I am confirmed in my estimation that Iranian roads are, on balance, better than Canada’s—and their engineers confront many of the same geographical and environmental challenges.

Only in such a mountain fastness, in fact, could the Kurds establish settlements that were relatively immune to the destructive zeal of their tormentors. Our destination is one of the most remote: Orumanat. When I finally find it on the map (thrown, at first, by its transliteration as Howraman), I experience a small shock of recognition. Orumanat lies barely ten kilometers from the Iraqi border, as the crow flies. Another ten or fifteen kilometers further on is Halabja. So these mountains are the same ones I glimpsed from the Iraqi side a year or so ago—the same ones that desperate Kurdish refugees fled towards as Saddam’s chemical munitions rained down on them. More than a million Iraqi Kurds found refuge in Iran during the 1980−88 war—welcomed and sustained by their kin, and by the Iranian regime and Red Crescent. This massive dislocation and humanitarian response was barely noted in the West. Only when Kurdish refugees flooded into Turkey in 1991 did the “CNN effect” take hold, pressuring the US and other governments to establish the “no-fly zone” that forged the Kurdish quasi-state in Iraq.

The scenery is spellbinding as we near Orumanat—ancient terraced hillsides, deep valleys with patches of lustrous green, groves of walnut and apple and pomegranate trees. We arrive at our hotel exhausted and exalted.