A Passion for Bread

Half a lifetime ago, I lived on the grounds of a Benedictine monastery in Vermont. Although I’d overcome a brief flirtation with religion by then and was well on my way to becoming a non-believer, I’d often slip into the back of the chapel in the evening when the monks gathered for vespers. Along with the customary Gregorian chants, these Benedictines sang beautiful songs written by one of the brothers. One song had a line that always remained in my mind: “Man does not live by bread alone.”

These words stayed with me because, well, I beg to differ. I could easily live on bread alone. Paired with a good Vermont cheddar cheese is best, but I’ll settle for plain butter, and some varieties are delicious with nothing at all.

I’ve always loved bread—even the rough loaves a neighbor used to make from coarse, hand-milled flour. But when I moved to Europe, where bread is serious business, I was in heaven. Different towns and regions have their own local specialties: Joggingbrot in Stuttgart, a rye bread packed with sunflower and pumpkin seeds, or salty Bretzeln (soft pretzels) in Bavaria.

In Salzburg, Austria, I bought my bread from a tiny bakery on the aptly named Brotgasse (Bread Alley). Identified only by the word Bäckerei (bakery) in faded letters over the door, the shop was easy to miss. It had a practical selection of baked goods and, unlike the elegant, tourist-packed Konditoreien (pastry shops) on Getreidegasse only blocks away, no fancy tortes or cream-filled pastries. It served oval loaves of rye bread, chewy in the outside, soft on the inside. Rectangular, whole-grain breads filled with sprouted rye, oats, and seeds. Large rounds of crusty sourdough. On the sweeter side, the options were a simple Obstkuchen (fruit-topped cake) or sweet roll. I knew I had been elevated to the exalted status of Stammgast (regular patron) when the baker started tucking little extras into my bread bag: a pair of Kipferl (crescent rolls) or even a slice of Zwetschkenkuchen (plum cake).

From time to time, I’d head for the Franciscan monastery on the far side of Domplatz and descend a narrow set of stairs into the basement, where the monks baked huge loaves of sourdough rye bread. On baking days, a wonderful yeasty fragrance wafted through square.

You might think it disloyal of me to abandon my favorite bakery for the Franciscans, even temporarily, but it was such a treat to stand in the bakery and watch the brown-robed monks pull fresh bread from enormous ovens that stretched nearly all the way to the ceiling. The loaves weighed two kilos each, so I always bought a Halber (half a loaf). Bread addict that I am, even I couldn’t eat four pounds of bread before it got stale.

Years later, when I visited Iran for the first time, an entirely new world of bread opened up to me. Like other Middle Easterners, Iranians prefer flat bread with lots of crust. And they like it fresh, still warm from the oven. When my husband was a boy, it was his job to fetch sheets of warm flat bread from the neighborhood bakery—not just once a day but before every single meal.

Like in Germany and Austria, Iranian bread has regional variations. The ultra-thin lavash is made with white flour in Tehran but comes in tastier whole-wheat varieties in the villages along the Caspian Sea. The bakery in the Isfahan neighborhood where my sister-in-law once lived sold a fragrant barbari, a thicker, oblong loaf with ridges down its length. And Isfahan’s signature street food is beryan—ground mutton with savory spices, mint, and slivered pistachios wrapped in a round sheet of taftoon, which is much like an enormous tortilla. 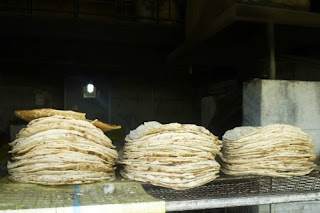 In Paveh, a Kurdish village in the Zagros Mountains of western Iran, I started each day with sheep’s milk cheese, homemade butter, and sour cherry jam spread on the thinnest, laciest bread I’d every seen. It was perfectly translucent when you held it up to the light. One morning, my hostess added koloocheh, slightly sweet rounds of fried dough, a kind of donut without the hole. Breakfast became my favorite meal of the day.

But my all-time favorite Iranian bread is sangak, a whole-wheat flat bread studded with sesame and black nigella seeds. In Iran, it is often still made the traditional way, long sheets of dough draped over heated pebbles in a clay oven and hung on hooks from the wall to cool. The only drawback to this age-old baking tradition is that sometimes small pebbles cling to pockets in the knobby surface of the loaf, which can be hazardous to the teeth. 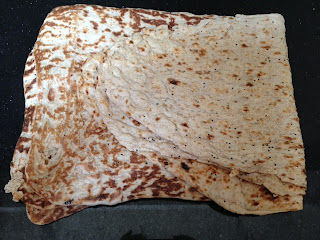 This hearty flat bread is so versatile, I could eat it with every meal—spread with hummus or smoky baba ganoush, wrapped around kebabs fresh from the grill, or torn up and stirred into the soupy portion of a one-pot, two-course meal called dizi.

Half the fun of travel is the opportunity to expand my culinary horizons and explore new tastes and textures. And visiting local bakeries to sample new kinds of breads usually tops my agenda. It’s an easy expedition—I just follow my nose.
Posted by Heidi Noroozy at 7:00 AM