Long before Romeo and Juliet, there was Laila and Majnu, the ultimate star-crossed lovers who generations of Middle Eastern, Asian, and African cultures celebrated through poetry, plays, art, and later film.

The original story is based on a real event, about a Bedouin shepherd named Qays (or Qais) ibn al-Mulawwah back in the 7th century. Qays fell in love with Laila (or Layla) bint Mahdi ibn Sa’d, a young girl from his tribe, and wrote many poems about his undying love for her. However, when Qays asked Laila’s father for her hand in marriage, he was refused, and soon, Laila was married off to another man and moved away. Qays became devastated and left home to wander the wilderness and deserts where he continued to compose poetry but quickly descended into madness. He thus earned the nickname Majnun or Majnu, meaning mad or crazy. 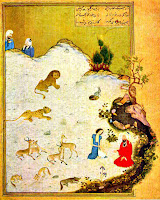 Qays’s poetry and the Arab stories about him and his love were already popular and well known in the region during those times and were told and retold many times over the centuries until the great Persian poet Nizami Ganjavi wrote what became the masterpiece version. Ganjavi, who coincidentally first wrote a famous epic poem about Farhad and Shireen, the star-crossed lovers Heidi wrote about, researched both secular and mystical sources about Laila and Majnun and used techniques from the Persian tradition of poetry to make the tragic love story more vivid, boosting its popularity immensely.

After Ganjavi’s version came out – three centuries before Shakespeare wrote Romeo and Juliet – the story of Laila and Majnun spread like wildfire through Azerbaijan, Turkey, and eventually to India, where it’s still considered the penultimate story of star-crossed lovers.

Take a look at some of the art this famous couple inspired.

The story is so entrenched, so much a part of the cultures it spread to, the term Majnun or Majnu is commonly used in the Middle East, Central and South Asia, North Africa, even Somalia to describe anyone who is madly in love, as does the phrase “Laila-Majnu” itself (often describing blushing newlyweds, for example). In Turkey, where Majnun is known as Mecnun, when someone says they “feel like Mecnun,” it means they feel possessed, often by love. 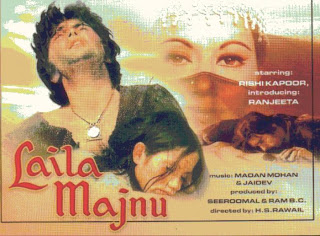 It could be said that most popular Bollywood movies retell the Laila and Majnu story in one way or another, but India has made at least a dozen or more films specifically about Laila and Majnu in many languages, including, curiously, Persian, Malay, and Pashtun. The Azerbaijani composer Uzeyir Hajibeyov set the story to music and made what is considered to be the Middle East’s first opera, premiering in Baku in 1908. In the 19th century, Isaac D’Israeli (the father of Benjamin D’Israeli, the future British prime minister) translated the epic poem from the Persian into the English, expanding the audience to the west.

Beyond the Indian films, the story has been referenced in much popular media, including Sufi qawwali poem-songs, bestselling novels by authors Orhan Pamuk and Khaled Hosseini, the famous Layla song by Eric Clapton (which even quotes a line from Qays's poetry), and the kitchy disco song Laila from the Indian film Qurbani. The couple has also been the subject of a Tajik Soviet film-ballet from the 1960s, at least one Iranian film from the 1930s, and a contemporary Yo Yo Ma concert.

Over time, the story has taken on slightly different retellings. In one recounting, Layla and Majnun were classmates, that Majnun wrote poems to Layla instead of paying attention to the teacher, and so received lashings in class. Every time Majnun was beaten, Layla would magically bleed, thus causing her family the consternation that leads to them separating the couple. In another version, Layla’s brother Tabrez protests Majnun’s love for his sister, and in the midst of their quarrel, Majnun accidentally kills Tabrez, which incurs the wrath of Layla’s family.

In one rural town in India, many believe that the couple hailed, not from the Arab world, but from the north Indian state of Sindh. And when Laila’s family opposed the union, the pair sought refuge in the tiny Rajasthani desert village of Bijnore in India, where they eventually died. The local government maintains a tomb that purportedly contains the couple’s bodies. Not far from the tomb is a well that the locals say the couple regularly visited together. Each year, the town hosts a two-day fair in June to commemorate the couple, and hundreds of newlyweds and lovers attend.

Whatever actually happened, fact and fiction have blended to create one of legend and literature's most enduring star-crossed couples.
Posted by Supriya Savkoor at 7:00 AM