Signs of the Times

My borrowed cell phone dinged every few seconds as I walked along Valli Asr Avenue in Tehran. Who could be texting me? Who even knew I had a phone in my pocket? I’d been in Iran for less than a week, and the phone was an old one that nobody had used in years.

Unable to read the Farsi texts, I showed them to my husband. He rolled his eyes in disgust and handed the phone back. “They’re all ads.” And they kept rolling in faster than I could delete them. Eventually, I turned the ringer off.

Marketing in Iran has come a long way in the 10 years I’ve been visiting the country—at least as far as I’ve noticed. Perhaps text marketing has been there all along, but the neon that brightens much of North Tehran after dark definitely wasn’t.

On my first trip to the Islamic Republic, the sign above the Super Star Restaurant grabbed my attention, partly because of the rarity of its blue neon glow, but also because it looked like a knockoff of an American Carl’s Jr. burger franchise, complete with a smiley face on the shooting star. Since then, coffee shops, juice bars, and fast food joints have sprung up all along Valli Asr Avenue, Shariati Street and other popular youth hangouts, most of them with signs in both Farsi and English. Even a number of Baskin Robbins ice cream parlors have sprung up, with their signature pink and white signs. 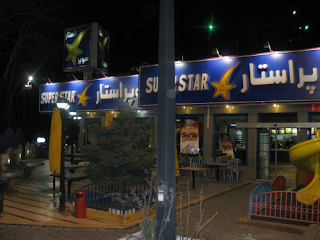 On my most recent trip to Iran, I avidly (some would say obsessively) photographed signs everywhere I went—shop signs, billboards, and banners on bridges spanning highways. Sometimes, it was the item being advertised that grabbed my attention. (Such as American and European brands—um, what happened to the embargo?) Other times, it was the message itself. And some signs were just so lovely, I couldn’t resist snapping a photo of them.

Here is a selection of my favorites:

Apple’s iPad 3 had been released only six weeks before my trip to Iran, and yet here was an ad for it on a billboard at the base station of the Velanjak Telecabine, the gondola that runs up Mount Tochal just north of Tehran. 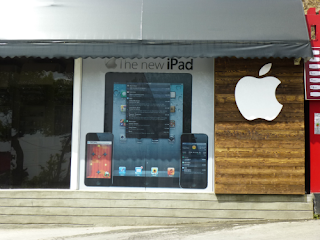 And across the street stood this food stand selling hot chocolate. The sign does not say shir cacao, the Farsi name of the beverage, but the actual English translation. While I made good use of such signs to practice my Farsi reading skills, it took me forever to decipher this sign because the last thing I expected to read was English words in the Farsi/Arabic alphabet. 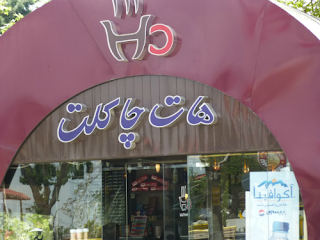 Over the years, I’ve noticed a boom in junk food consumption, along with expanding girths, a phenomenon that is represented by this snack bar, with its American candy bars, English-style biscuits, and chips on a stick (which I’ve never seen anywhere but in Iran). 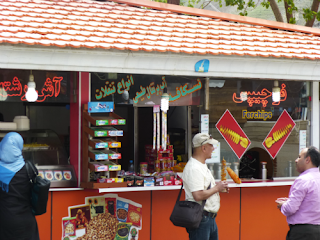 Pedestrian bridges over busy thoroughfares have become popular places for large billboards, like this one near Lahijan in Gilan Province, which advertises koloucheh, a walnut-filled cookie that is a local specialty. 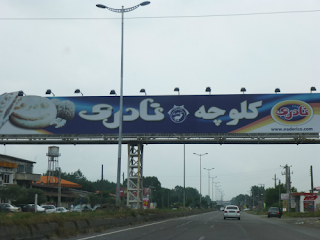 Concern for the environment is just as big in Iran as anywhere else, as demonstrated by this billboard for LG inverters, which proclaims that this brand saves money and energy. The banners beneath the sign hold slogans praising important Islamic religious figures—a reminder that religion overlays nearly everything in the Islamic Republic. 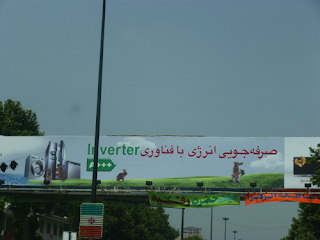 Occasionally, I just couldn’t resist taking a pretty picture, like this handwritten banner in Gilan Province, which advertises land for sale. 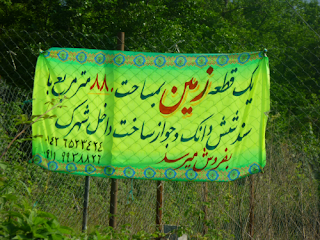 Or this sign above a shoe shop in the Tajrish Bazaar in Tehran. All the stores here have such elegant calligraphy lettering on pretty tile plaques. 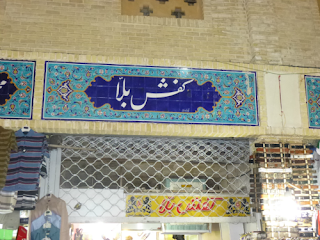 Like everywhere in the world, Disney characters appeal to Iranian kids. This sign promotes ice cream. Have you noticed how many of these ads are for food? 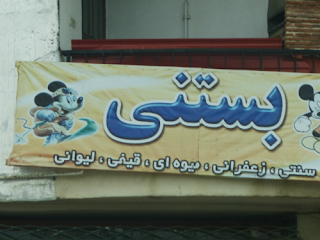 And here’s a sandwich shop with its menu printed on the window. The choices include kotlet (a kind of flat, meat patty), morgh (chicken), kalbas (cold cuts), sosees (sausage), and zaban (tongue). 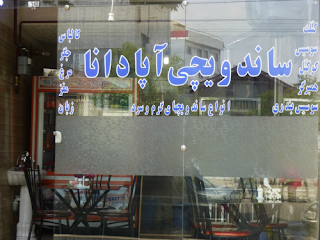 A symbol can often be more effective than a sign. Many Iranian towns are famous for a specific product, usually an agricultural one. And often they have a sculpture advertising the local specialty on the road into town. This orange symbol is from a town in Mazandaran Province, on the Caspian Sea. Orange groves are everywhere in Iran’s northern provinces, and in May the trees were blooming, perfuming the air throughout the region. 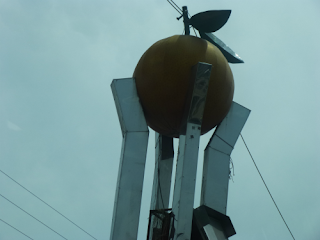 What fascinates me the most about these signs is just how much they reflect a phenomenon that I observe on every trip to Iran. At its very core, the country is a fascinating blend of the old and the new, tradition and modernity, religious devotion and secular life. I can hardly wait to return to the Islamic Republic and see the next phase of its marketing metamorphosis.