Off The Beaten Track: The Mysterious Island Of Tinos 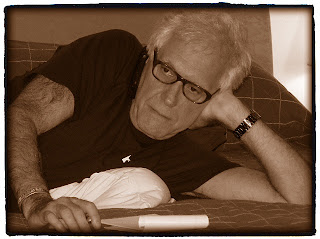 Our guest this week is mystery author Jeffrey Siger, whose work has been called “prophetic” by the Greek Press. Eurocrime described him as a “very gifted American author...on a par with other American authors such as Joseph Wambaugh or Ed McBain,” and the City of San Francisco awarded him its Certificate of Honor citing that his “acclaimed books have not only explored modern Greek society and its ancient roots but have inspired political change in Greece.” Target: Tinos, the fourth novel in his Chief Inspector Andreas Kaldis series, earned a starred review by Publishers Weekly, following up on his internationally best-selling Murder in Mykonos, Assassins of Athens, and Prey on Patmos: An Aegean Prophecy. Born in Pittsburgh, Jeffrey practiced law at a major Wall Street law firm and established his own New York City law firm before giving it all up to live and write on the island of Mykonos. He blogs on Saturdays at Murder is Everywhere and can also be found at www.jeffreysiger.com.

I don’t know how many of you are familiar with the Greek island of Tinos, the fourth largest of the Cycladic islands (and also the setting for my just released fourth Chief Inspector Andreas Kaldis mystery, TARGET TINOS (Poisoned Pen Press). It sits with its looming high-ridged backbone and mountain peaks often lost in clouds just a few miles across the Aegean Sea from my front porch on the island of Mykonos.

If you have heard of Tinos it’s probably because of the Church of the Annunciation (Panagia Evangelistria) and the more than one million pilgrims who flock there each year seeking to invoke the healing powers of its Miraculous Icon of the Virgin Mary (the Megalochari). As perhaps the most revered religious shrine in Greece, it’s only natural that it’s known as the “Lourdes of Greece.”

Most who come to Tinos are only aware of the Church and its surrounding harbor town. But for those who venture out onto the island, there are serious surprises in store. Fifty villages as quiet and undisturbed as a dreamer’s quaint fantasy of Greece; brilliant vistas at every turn; a meandering two-hundred-mile network of cobblestone trails and old farm paths running from hillside to hillside and dipping into valleys in between; and a history of fabled marble quarries and artisans linked to some of Greece’s greatest artistic achievements.

In ancient times, a temple to the Greek god Dionysus stood on the present day site of the Church. When Christianity came to the Cyclades, the temple was transformed into a Christian church dedicated to the Virgin Mary and Saint John the Precursor. It was in those early Byzantine years that the Holy Icon of the Megalochari came to the island to be kept and venerated within that church.

But the Megalochari dated back to long before Byzantine times. It belonged to the early Christian era and those who studied it unanimously concluded that it was one of the first three icons painted by the apostle Saint Luke during the lifetime of the Holy Virgin. Many believe the Megalochari received its wonder-working power directly from the Holy Virgin herself, who blessed it with the words, “The grace of him who was borne by me, be through me with it.”

In the mid-10th century, Saracen pirates invaded Tinos, burned and leveled the church, and the holy icon vanished. Nine centuries later, in July 1822, a nun named Pelagia (later sainted) from a monastery northeast of the main port town had three recurring, consecutive Sunday visions of the Holy Virgin instructing her to convince her superiors to order digging at a specific place where they would find the missing holy icon and that they must build a church to the Holy Virgin.

Although her superiors believed the nun, excavations did not start until September. Within a matter of days the ruins of the ancient temple were discovered, but as more days wore on without finding the Megalochari, the islanders lost heart and work stopped. Soon after, a great cholera epidemic struck the island, killing hundreds. The townspeople were frightened, believing they’d brought the epidemic on themselves by not following the Holy Virgin’s instructions. They prayed for forgiveness, resumed excavations, and began rebuilding a church on the unearthed ruins.

On January 30, 1823, a laborer discovered the Holy Icon of the Megalochari by splitting it in two with his shovel. On one half was the Virgin Mary and on the other half the Archangel Gabriel. It had been buried for almost 850 years, yet when found was virtually undamaged. And as was recorded by historians of the time, from the moment the holy icon was discovered no more cases of the epidemic were reported and those suffering with the disease recovered.

The people of Tinos decided to build an additional church much larger than the one they’d started, and work immediately began on what would become the magnificent Church of Panagia Evangelistria. Construction of the church and part of the surrounding complex was completed in less than eight years, virtually all during Greece’s War of Independence with Turkey while Tinos operated a wartime port, sent its young off to fight alongside other Greeks, and struggled to feed thousands of refugees fleeing there from other islands.

The founders of the Church were forward thinkers and established it as part of a legal entity separate and distinct from the Greek Church, a status confirmed by an act of the Greek state in 1835 and a royal decree in 1851. That entity, known simply as the Evangelistria Foundation is administered by a ten-member commission under the supervision and control of the Greek state, not the Greek Church. Employees, including the Church’s clergy, are appointed by the commission and paid out of the Foundation’s treasury.

The Foundation derives its income mainly from donations, the performance of ritual celebrations and rites, legacies from deceased donors, the sale of offerings, and rents from properties. Its wealth and influence has led some to call the Foundation, “The Vatican of Greece.”

On Tinos, virtually every major public works project, from creation of the island’s first water distribution network in 1926 to the erection of its power plant and high-tension distribution system, the new port and quay, and most public roads, owe their existence to the largess of the Foundation. As do the island’s needy, sick, aged, and indigent, and virtually all of Tinos’ church organizations and parishes. But the Foundation’s influence extends far beyond the island, for the Foundation is a significant voluntary contributor to Greek clergy pensions and insurance funds, churches across Greece affected by calamities, and missionary activities outside of Greece. It has also supported the State of Greece in times of national emergency and war, and as well as others beyond Greece’s borders affected by the same. 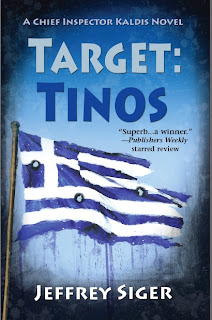 Some might say that one of the greatest miracles of Tinos is how the Foundation has been able to maintain such relative anonymity with all that it does, albeit behind the scenes. After all, there are a million pilgrims each year, many crawling the steep half-mile up from the harbor to the Church carrying offerings and pushing before them candles they vowed to light to the holy icon. And each August 15th Tinos is a madhouse filled with gypsies and pilgrims from around the world celebrating the Feast of the Assumption of the Virgin with its parade of the holy icon down from the Church into the harbor in a procession filled with religious dignitaries, government officials, military, and police. Still, few know about all that the Foundation does.

And the Foundation likes it that way. Especially the part about its vast hidden treasures.

But that’s another story. One for which Target: Tinos received a starred review from Publishers Weekly calling it “superb…a winner.”
Posted by Heidi Noroozy at 7:00 AM