Sharbat: Lemonade With A Persian Twist 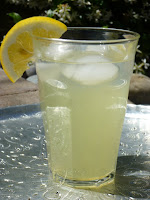 The weather turned hot this weekend, and as the mercury climbed toward 90, I eyed my lemon tree with speculation. The bright yellow globes dancing among the green leaves beckoned me, practically begging me to do something with them before they fell off the tree and rotted on the ground. “How about a nice, refreshing glass of iced lemonade?” they seemed to say. Or even better, a glass of sparkling Persian sharbat.

I drank a lot of sharbat on my recent trip to Iran. When the weather turns warm, this summery drink replaces the ubiquitous tea that is served at the beginning of—and throughout—any social gathering. It is a delightfully refreshing beverage that starts out as a fruit or herb-based syrup and ends as a sweet-sour tingle on your tongue.

The first time I tasted sharbat was in the streets of Tehran—and I do mean in the street and not on it. I was sitting in a car at the time, caught in a traffic jam on Vali-Asr Avenue on a sweltering day in late August. Just when I thought I was going to melt right into my seat, a stranger thrust a tray laden with plastic cups of pomegranate-flavored sharbat through the open window. It was either a mirage or a miracle.

Neither one nor the other, actually. It was a holiday called Neem-e Sha’ban, the birthday of Imam Zaman, the last of the twelve Imams, divinely ordained leaders of the Shia faith. Shia Muslims believe that Imam Zaman disappeared in the 8th century and will return to the world on Judgment Day.

His birthday is a big holiday in Iran, an occasion for joyous celebration. Cheerful lights are strung across the streets of Tehran and colorful banners are wrapped around tree trunks. People go into the streets and share boxes of pastries and drinks with everyone they meet. In cold weather, the beverage is likely to be tea or hot cocoa. In summer, it is sharbat.

Sharbat is a popular beverage throughout the Middle East and South Asia, from Turkey to India. It is mentioned in The Thousand and One Arabian Nights, and Lord Byron is said to have enjoyed it on a trip to Istanbul in the early 1800s.

The drink is made in a variety of flavors—herbal, floral, and fruity. Some popular ones are rose (sharbat-e gol-e sorkh), willow essence (sharbat-e bidmeshk), and orange blossom (sharbat-e bahar narenj). It can be made from many kinds of fruit, such as sour cherry (sharbat-e albaloo), pomegranate (sharbat-e anar), or rhubarb (sharbat-e rivas). One of the oldest varieties is sharbat-e sekanjebin, which is made from a mint-flavored syrup of vinegar and honey. (Trust me, it tastes much better than it sounds.) Grated or sliced cucumber is often added to enhance the taste. 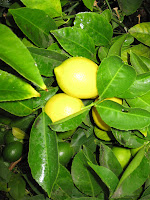 With all the ripe lemons in my back yard, sharbat-e ablimoo was the best way to cool off in this weekend’s sweltering weather. It’s so easy to make, you hardly need a recipe, just some lemons, sugar, water, ice, and a splash of rosewater (an essential addition to most kinds of sharbat). But to get you started, Azita Mehran, my favorite Persian food blogger, has an excellent recipe at Turmeric & Saffron.

Give it a try and let me know how it turns out. Noosh-e jaan! Enjoy!