A Sample of Poetry 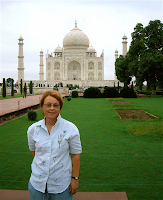 Patricia is cruising the Greek Islands this week. Her friend Lenny Lianne shares some of her poetry.
Lenny is the author of three books of poetry and is an independent researcher. She holds a MFA in Creative Writing (Poetry) from George Mason University, a MA in Women’s Studies from George Washington University and a BA in History from George Mason University.
She’s given workshops and poetry readings on both coasts of the U.S. When not traveling to exotic places around the world, she and her husband live in Arizona. She blogs about poetry at Passport to Poetry 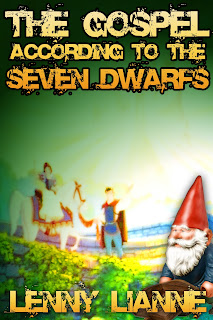 When the short-tailed song thrush
repeats its series of notes
two or three times, she thinks
it must be her mother’s spirit
telling her again to remember
she is loved, always.
The cordial linnet’s call
seems like another prompt.
Even the wheezy song of the siskin
suggests her mother’s last words
that love will locate her if only
she believes in its abundance.
In time the girl forgets the feel
of her mother’s hands holding her
close, but the whispered words
hover, delicate as dust motes,
or return, like the past itself,
to circle through certain instants.
In between, the future of her story
is forever present.
from The Gospel According to the Seven Dwarfs
San Francisco Bay Press, 2010
IRISES
Outside the asylum, an overgrown garden
borders a courtyard where, my first week here,
I notice a surfeit of irises and set up my easel
to paint near a plain, unperturbed fountain.
From discrete distances, the other patients
watch as I work; they don’t disturb me.
Later when I walk through the arched hallways
of the hospital, I hear their howls and ravings.
I think I have done well to come here as I am
starting to discard my dread.  Others too
vouch they hear voices and strange sounds
during their attacks.  And that lessens the horror.
On canvas, I paint fragile petals, lapis blues
to indigo.  I try to capture each peculiar pivot
and bend of every head, even the one white
blossom almost on the edge of other frantic,
and frail, flowers
from Frenzy of Color, Reverie of Line
San Francisco Bay Press, 2010
AND TOMORROW, A WILDERNESS OF RICHES
late December, 1601 on the Susan Constant, Godspeed and the Discovery 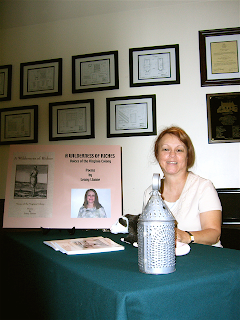 We could almost taste the gold,
all of us so hungry for easy riches,
even the ambitious English gentlemen,
mostly upper crust subsequent sons
with no landed inheritance.
This was the whispered promise,
still immanent and fresh,
that we were headed for a land,
lavish in gold and silver, translucent
pearls and fruit, all bountiful
and ready for picking.


Even for the six carpenters, the mason,
two bricklayers, the blacksmith,
the tailor, drummer and barber,
for all the laborers and the four boys,
the past was a place of fog and smoke
and tomorrow, a wilderness of riches,
where even the air would be sweeter.
This vision clung to us
the way the long horizon held
onto the sky.  Daily we looked out,
past the scud and slap of the water,
and waited for the land of wealth
to present itself like a new bride.
from A Wilderness of Riches, Voices from the Virginia Colony
ScriptWorks Press, 2008
Posted by Patricia Winton at 7:00 AM