Some Books Have Wings 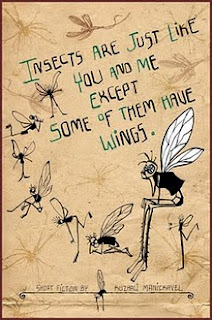 You finally get a chance to read today’s newspaper, only there’s some kind of annoying buzzing around your ear. You swat at it a few times, even move to another seat, but it’s as though the little bugger’s taunting you: “Catch me if you can!” You decide to ignore it and focus on the paper, brows furrowed so hard, it hurts. The word “mosquito” jumps out and bites you. Now isn’t that funny? The first story you read is about malaria.

The experience of reading author Kuzhali Manickavel’s short story collection, Insects Are Just Like Us But Some of Them Have Wings, was a little like that for me. She packs 35 stories within some 140 pages, stories ranging anywhere in length from a paragraph or two to the longest one, a mere 12 pages. Some stories are interconnected, with recurring characters. There are diagrams between the stories, depicting various species of bugs. The life cycle of the assassin bug in figure 2, for example, follows “the progression of insanity in women.” Then there's figure 6, “Various Stages in the Development of the Artist Represented by the Emergence of a Dragonfly.” Bugs pop up randomly in these stories, though they aren’t usually the central theme. Or maybe they are?

To pile on the metaphors, reading these stories reminded me of going to a museum, standing in front of a really abstract painting thinking “what the….?”, while overhearing the folks behind me whisper, “powerful… and so political.” With a huge grassroots following, Manickavel's writing is described as quirky, irreverent, dark, and laugh-out-loud funny. Related to my museum story, I would throw in avant garde and post modern.

My favorite parts of this slim collection are the lyrical descriptions and imagery. Flood water flows like old coffee, tiny piles of sand try to escape a beach, the sun grinds its heels into a character’s eyelids, an old mythical character is reimagined as the “King Of Everything That Goes Wrong Even When You Do Everything Right.” Many of the stories have political and social undertones, though some may have escaped me, either because I’m not familiar enough with Tamil traditions and local issues, or more likely, I’m just not hip enough. (I suspect the latter but maybe we could just keep that our little secret? The book did teach me how to curse in Tamil, in case that counts. In detail, double entendres included.)

Kuzhali Manickavel is a young, Canadian-born author who, at the age of 13, moved to a small temple town in the southern Indian state of Tamil Nadu. She’s most often compared to American author, Miranda July, who wrote a review that appears on the back of the paperback edition. Insects Are Just Like Us But Some of Them Have Wings has been well received both in India and abroad as something of an underground sensation. Its small-press publisher, Blaft Publications Pvt. Ltd., has achieved international success with this 2008 book along with two popular anthologies of Tamil pulp fiction.

One thing’s clear: Manickavel is an author to watch. Insects… was nominated for both the 2009 Frank O'Connor International Short Story Award, renamed the The Cork City – Frank O’Connor Short Story Award, and the dubious but somehow apropos honor of the world’s oddest book title (i.e., the Diagram Prize, sponsored by The Bookseller magazine). While Manickavel hasn’t yet won any major literary awards, I’m willing to bet it won’t be long before she does.
Posted by Supriya Savkoor at 7:00 AM

Email ThisBlogThis!Share to TwitterShare to FacebookShare to Pinterest
Labels: awards, Blaft, Insects Are Just Like Us But Some of Them Have Wings, Kuzhali Manickavel, Supriya Savkoor