At Last, We Meet 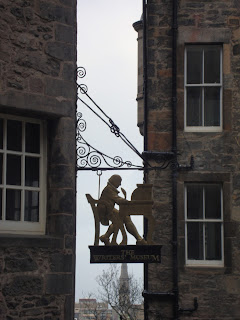 On my recent trip to the UK, I took a train to Edinburgh, Scotland, much anticipating the red and green plaid skirts and a few old tales about Mary, Queen of Scots. I expected to find a charming old city, but I didn’t expect to visit one of my favorite writers of all times: Robert Louis Stevenson. More so, when I was reading his books in Russian translation, in my ignorance, I thought him an Englishman. Not only was he a Scot, but Edinburgh was his hometown.

The Royal Mile – Edinburgh’s main street – leads down from the Edinburgh Castle, the former residence of legendary Mary Stuart, to the Scottish Parliament and the Holyrood Palace, which King James converted from a medieval monastery into a royal residence. Packed with little museums that feature everything from weaving to childhood toys, the Royal Mile can easily monopolize your attention, but it’s the little narrow side streets that lead to the off-the-beaten paths and undiscovered treasures.

Edinburgh’s Writers’ Museum is one of them. You can’t even quite see it from the main drag; you have to be a wanderer at heart to find it. And perhaps, a writer too – to notice the hanging sign in the shape of a scribe, jotting down those precious words with an ink feather as fast as he can. A writer’s words are always fleeting, by quill or by keyboard.

The entire first floor of the Edinburgh’s Writers’ Museum was all about Stevenson. 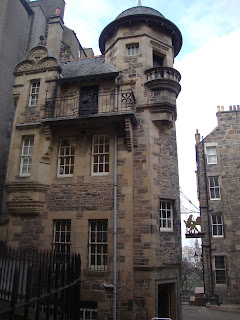 I've always loved Stevenson’s books and admired his poems. As a child, I liked his work so much, I even read the preface for The Treasure Island – and, surprisingly, found out we had something in common! We were both sickly kids who spent days in bed, watching others play outside while our own caretakers wouldn’t open our windows even a crack. He seemed to be susceptible to the cold and damp Edinburgh weather, I suffered from tonsillitis and pneumonia in the icy Russian winters. So we let ourselves get lost in books, invented our own little worlds and created imaginary friends, with whom we embarked on the most incredible adventures. I wrote mine down sometimes. I’m pretty sure he did the same. “When I suffer, stories are my salvation,” he wrote. “I take them like opium.”

The son of Thomas Stevenson and Isabelle Balfour, Stevenson was born to a family of engineers. So was I. Only his engineering dynasty specialized in lighthouses while my kinfolk built planes, trains, and automobiles. He didn’t do well in technical sciences in school, and I spaced out in my math classes. He became a writer, and so did I. I even learned to write with a fountain pen in school.

And now, we’ve met at last.

Originally built in 1622 as a private home for one of the city's wealthiest families, the museum also hosts exhibitions to two more of Scotland's great literary figures: Robert Burns and Sir Walter Scott, whose books I also love. The dining room of Scott's North Castle Street home has been reconstructed, complete with the his own chessboard and dining table.

Yet I kept going back to the Stevenson’s exhibit, with its collection of photographs, many of which came from the Island of Samoa where he used to live later in life. I spent the majority of my time at the museum there, in fact. It was as if I'd been able to travel 150 years back in time. As I read his letters and eavesdropped in on his thoughts, I learned something else he and I had in common: he was an explorer too. “I travel not to go somewhere – but to go,” one of his scribbles said.

You never know what you may find and who you may meet when you travel foreign lands. I met Robert Louis Stevenson. I even told him his books had once been my opioid salvation.
Posted by Lina Zeldovich at 7:00 AM