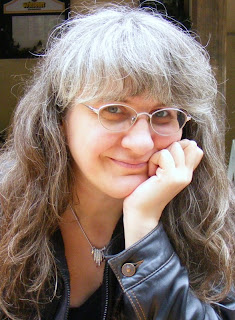 Our guest this week is Almuth Heuner, a German writer, translator, and literary scholar who specializes in international crime and mystery, especially by female authors. She has published a number of short mysteries, mainly with a culinary theme, and edited several short mystery anthologies as well as translated crime novels into German. Almuth is an active member of the two major German-speaking mystery authors’ organizations, Das Syndikat and Moerderische Schwestern (formerly the German Chapter of Sisters in Crime, of which Almuth is a past president). Find out more about her at www.heuner.de (in German; English version under construction).

* All photos by Uwe Kletzing


Last year, I received one hundred mystery novels for free—all new books, all just published, all by new authors from Germany, Austria, and Switzerland. They arrived by mail throughout the year (my postman delivered them several times a week with a deadpan face, and I’m sure he was hoping I’d invite him in for coffee!). Afterwards the books sat on a special shelf, waiting for me to make good on my promise to read them within the year.

You will have guessed by now that I’d been elected to a panel of judges, tasked with finding the best debut mystery novel of 2010, originally published in German. That novel will be awarded the Friedrich-Glauser-Preis, which comes with a €1,500 cash prize.

But “Best First Novel” is only one of the categories. Although the most eagerly anticipated Glauser award is the one in the “Best Novel” category (€5,000), the winner of the “Best Short Mystery” also gets a lot of attention. Juvenile mysteries have their own award, which is presented at the same time as the Glauser: the Hansjörg-Martin-Preis (€2,500), whose judges include several young readers in addition to the adults.

The sponsor of all these annual awards is Das Syndikat, a mystery authors' association with more than 600 active members from Germany, Austria, and Switzerland. The award is very similar to the “Edgar” (the Edgar Allan Poe Award presented by the Mystery Writers of America), even down to the judging process. Each category has five judges, elected from the Syndikat membership, who read all the works submitted to their category by the authors or the publishers. The judges then compile their personal top ten list and meet in late January of the following year to come up with a short list of five entries and select the winner.

The short list is published a few weeks before the “Criminale”, the annual convention and festival which is usually held in early May. The festival ends with a gala ceremony, called “Tango Criminale”, during which the awards are presented “Oscar style”, like at the Academy Awards. Movie clips first introduce all works and authors from the short lists in each category. Then the presenter draws the winner’s name out of a big envelope, holds a short speech, and presents the award in form of a small statue of a black glove, along with a big check. Instead of the check, the “Best Novel” winner receives a small suitcase filled with used bank notes in small denominations, non-consecutively numbered. (The suitcase is supposed to be returned for the following year’s ceremony, although it doesn’t always turn up in time.)

The “Ehrenglauser” is an unendowed prize (but comes with a small bronze statuette) for individuals who have made a significant overall contribution to the German-language crime and mystery writing scene. Recipients may be authors as well as journalists, publishers and scholars, and any Syndikat member can nominate a person for this award by submitting his or her name to the relevant panel of judges.

The Syndikat, founded in 1986, began awarding prizes in 1987, at first only for Best Novel and the "Ehrenglauser" categories. The other categories came later, Best Juvenile Mystery in 2000 and Best Short Mystery and Best First Novel in 2002.

And in whose honor did we name our awards? Friedrich Glauser (1896-1938) was born in Austria but moved to Switzerland at the age of 17—more or less permanently. He wanted to be a poet, but his health and rebellious nature prevented him from settling on anything long-term, be it place or vocation. His drug addiction frequently landed him in the hospital, where he started writing crime novels (“In Matto’s Realm”). Today, he is considered one of the earliest German-language crime fiction writers.

Hansjörg Martin (1920-1999) launched the post-World War II era in German crime writing when he wrote his first adult mystery in 1965. But prior to that, he’d written a lot of mysteries for young readers, and continued to do so throughout his writing career.

The 65th Edgar banquet was yesterday, but the nominees for the Glausers and the Martin have to wait another week. This year’s awards ceremony (the 25th), takes place on May 7 in the city of Mönchengladbach, near Cologne, Germany. And we’re all looking forward to the evening gala as well as the entire festival, which starts on May 4. It will be nearly a week of fun and getting together with friends, of celebrating not only the best stories but the entire experience of reading and writing crime and mystery literature.

For an overview of the crime and mystery scene in Germany, Austria, and Switzerland, check out the upcoming May/June issue of World Literature Today.

More information about Das Syndikat and the Criminale can be found here (in German): Das Syndikat
Posted by Heidi Noroozy at 7:00 AM