The Ballade of Oleg The Seer 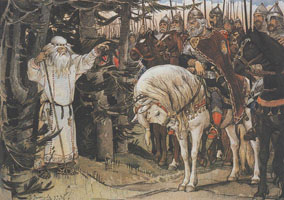 Once upon a time in the 10th century there was Oleg the Seer, also known as Oleg the Wise or Oleg of Novgorod. A semi-legendary warrior, he was considered to be the founder of the Kievan Rus’ state, which later became Russia. Originally a Viking leader, he united the local Slavic and Finnish tribes under his rule and moved the capital of Rus’ from Novgorod the Great to Kiev. That move was strategic: Kiev’s location allowed launching attacks to the East. Oleg proved to be a great and nearly invincible military commander: he fought the Khazar tribes who often raided the border villages of the young Rus’ and waged war on the Byzantine Empire, aiming at no less than Constantinople, which in Russian was called Tsargrad – The Tsar’s City. Oleg fixed his shield to the gate of the Tsargrad to symbolize his victory.
Oleg’s uncanny abilities earned him the title of The Seer. As the legend goes, the Byzantines attempted to poison Oleg, but thanks to his oracular powers, he sensed the betrayal and refused to drink the cup of poisoned wine. Still, like every mortal, he feared death and asked a prophet to foretell his destiny. A warrior, Oleg was prepared to meet his noble end from a sword, yet the pagan oracle prophesized him a death much more mysterious than that.

Inspired by this old legend, the famous Russian poet, Alexander Pushkin, wrote The Ballade of Oleg the Seer, much quoted to this day.  Oleg the Seer has also been one of the emost painted Russian historical characters.
“Oleg, the wise Prince, roused to arm,
Cried: ‘Vengeance on the ruthless horde
Of raiding Khazars! Field and farm
My men shall put to fire and sword!'
And when his faithful horse was brought,
He rode out with his knights and men,
In damascened gold armour, wrought,
By some deviceful Saracen."

On the way to his battle, Oleg came across an old prophet white from age, and asked him,
“'What woe or weal shall me betide?
How soon shall I, beneath the sods,
Lie buried, while my foes rejoice?
Fear naught; nor speak with faltering words.'” 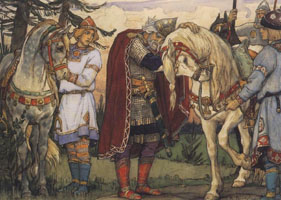 The man predicted Oleg’s many victories. He promised that his lucky fate will shield him in battles for years. Yet the betrayal would come from someone very dear.
"'Thy horse, that dreads no furious fray,
Hath borne thee well in many lands;
And like a rock amid the spray
Among the whistling shafts he stands,
Or bears thee through the brunt of spears,
Obedient to thy lightest breath:
Nor frost, nor fight, with thee he fears:
Yet even he shall be thy death.'"

Determined to win the ultimate battle with his destiny, Oleg held his grief and parted with his steed.
"The brave prince beard the strange discourse,
With smiling lips, but gloomy brow:
Then, sadly, lighting from his horse,
He spake: 'And must we two part now?'"

Years had passed. One day, as Oleg and his friends recalled their many crusades, he asked about his horse and was shocked to hear the answer.

“'One answered: By the river-shore,
On a high hill-top, sound asleep
He lies; and will awake no more.' 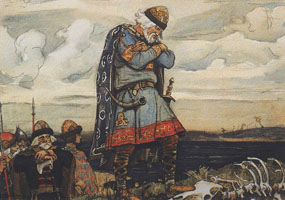 Musing, Oleg bent low his head,
Remembering the days of old;
And sadly to himself he said:
“'Had I not feared the doom foretold
By that old fashioner of lies,
My old friend had been with me still!'”
And then he bade his lords arise;
And seek with him the burial hill."

Escorted by his retinue, Oleg found his steed’s bones and gently touched its white skull as he spoke to his departed friend.
"With gentle foot, and bowed with grief,
Touching the skull, Oleg then said:
'Sleep well, my friend! Our day is brief;
Though I live; thou art with the dead:
Nor, at my funeral feast, full nigh,
Sword-spilt shall thy warm life-blood fall
Upon me dead, when even I
Drop to the dust that ends us all.'

And, even as these words he spake,
From out the eyeless skull there shot
A ribbon-like black deadly snake,
Which stung his foot. “'Is this my lot
By that old wizard prophesied?
Death ambushed in a lifeless bone!
Then, welcome death!' the brave Prince cried:
And sank to earth without a moan."

And thus, many Russians firmly believe one cannot escape his destiny. Do you?
Posted by Supriya Savkoor at 7:00 AM