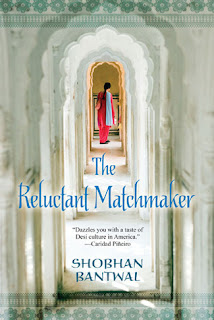 I love reading books written by Indian writers as I find the prose, culture and the intricacies between the character’s relationships captivating. When Supriya suggested I give one of Shobhan Bantwal’s books a try, I jumped at the chance. Shobhan has written six women’s fiction novels that cover the issues affecting Indian women living in India and the United States.

I chose THE RELUCTANT MATCHMAKER, Shobhan's latest "Bollywood in a book," as its premise intrigued me instantly. Set in America, Meena Shenoy is a single, thirty-one-year old who works in PR for an Indian-run technology company. Even though she’s barely five-foot tall, Meena literally falls for her boss, Prajay Nayak, who towers over everyone. When he asks to meet her privately, she thinks he’ll confess his undying feelings for her. Instead, he wants to enlist her excellent PR skills and act as his marriage consultant to find him a bride who is no less than six-feet tall.

Reluctantly, Meena embarks on this project, all the while battling her romantic feelings for the man who is intent on finding an “Amazon in a sari.” Woven in with Meena’s story, are a wonderful bunch of characters, including Meena’s elderly Aunt Akka who drinks booze, eats meat, and decades ago shunned tradition and married for love. Akka is Meena’s voice of reason and pushes Meena to follow her heart and not let anything, including height, get in the way of her dreams.

Meena’s brother, Maneel, has his own challenge when he falls in love with Naseem, a successful woman who happens to be a Muslim. Meena’s Hindu parents have a hard time accepting the relationship.

Meena’s parents are in favor of a traditionally arranged marriage for their daughter who is about to be put on the shelf, but Meena is determined to find her own man. She dates a couple of men and tries to fall for one of them, but she can’t shake her obsession over her boss, Prajay, whom she thinks views her as his petite and fragile marriage consultant.

I’ll leave it there, as I don’t want to spoil this fabulous read. Shobhan does a wonderful job of addressing karma and whether it’s possible to change one’s destiny through Meena attempting to mold her future but she’s constantly challenged by the actions of others.

The main characters in the book are of Konkani descent, and I’ve yet to find other fiction written about these Indo-Aryan people. The author, Shobhan Bantwal, is Konkani as well, and this is the first book she’s written focusing on Konkani characters. Her knowledge about their views on marriage and tradition gives an interesting insight into the Konkani culture.

THE RELUCTANT MATCHMAKER is a fun read while also addressing issues affecting people torn between traditions from their old country and adapting to the lifestyle in their new land. It’s a fine balance and can easily send one toppling head first into either camp. This dilemma, of course, is handled wonderfully in THE RELUCTANT MATCHMAKER while taking the reader on an exciting journey with the main character, Meena, and her amusing family. This book is perfect for readers who like a mix of culture, traditions, and romance. I’m looking forward to reading more of Shobhan Bantwal’s books!
Posted by Alli Sinclair at 7:00 AM