Off The Beaten Track: An Eskimo Whaling Adventure 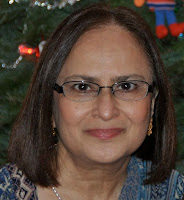 Originally from Karachi, Pakistan, writer and editor Shehla Anjum began her life in the United States in the cold climes of South Dakota, where she received a college scholarship. She went on to study biology at the University of Minnesota, public administration at Harvard, and creative writing at the University of Alaska Anchorage. She now lives in Anchorage, but began her Alaska sojourn in Barrow, the northernmost town in the United States.

A moan of “whoosh, whoosh” echoed in the cold silence after the bowhead whale sank back into the water. It resurfaced, spouted a geyser from its blowhole, arched its back, and disappeared in a slit of water that cleaved the jagged landscape of white and blue ice. I saw that whale, and dozens more, during a weekend as a guest cook at an Inupiat Eskimo spring whaling camp near Barrow, Alaska, about three decades ago. I had lived in Barrow, the northernmost town in the United States, for nearly two years before I was invited to the camp, a privilege that the Inupiat accord only to few outsiders.

For one magical weekend, I became a silent participant in one of the last primeval experiences still in existence. That visit is probably the most unusual experience of my life.

I began dreaming of travel as a child in Karachi, Pakistan, and made lists of places I wanted to go – London, Paris, the Grand Canyon, the Alps, the Himalayas, Australia, Africa, and so on.  Alaska never entered those dreams. It was for me, as for most, a place of perpetual ice, snow, cold, and Eskimos living in igloos. Still, I ended up not only living in Alaska, but my long stay here began at the “Top of the World” in Barrow.

Every spring, the Inupiat of Alaska’s coastal villages ready for a harvest of bowhead whales in a tradition going back more than a thousand years. Bowheads come closest to shore during spring migration to Canadian Arctic feeding grounds. They travel through areas of open water, known as leads, formed when the ice pack begins separating from the shorefast ice, which is the ice that forms from the shore and beyond, beginning in the fall. Inupiat hunt bowheads from camps set up on the shorefast ice next to the open water. These whales are an integral part of the Inupiat diet and cultural identity, and learning to hunt them is a rite of passage for young Inupiat men.

On a Saturday in early May, I huddled amid camping gear piled on a sled behind a snow machine in a caravan of three or four. A couple sleds carried umiaks, boats made from walrus skin used for the hunt. I was one of only two women accompanying our host, Ralph Aveoganna, a Barrow whaling captain. Only men go out to land whales, but women help out by cooking and performing other domestic chores. Dixie, an Inupiat woman, and I went along that day as the designated helpers for the crew of eight Inupiat men.

We traveled on a perfect Arctic day of clear skies, about 20 degrees (Fahrenheit), and constant light. Our trail to the camp, about 14 miles from Barrow, lay through a landscape with a geography all its own. Smooth stretches that sparkled like diamond dust. Rough patches strewn with ice boulders of clear aquamarines and opaque moonstones. Snow dunes carved by the wind. Miniature mountain ranges and palisades heaved up by the embrace of the shifting ice pack and shorefast ice.


After traveling about 12 miles on the ice past the shore, we halted at the edge of a lead. Ralph and the crew put the umiaks in the water and loaded them up with supplies and camping gear. We set out for camp with the snowmachines following along on the ice.

At the campsite, Ralph chose a spot about 25 feet back from the lead, where we quickly set up the tent we’d use for cooking, sleeping, and warming up. Dixie and I fired up the Coleman stove, put water on for tea, and started rummaging for lunch supplies. The men began their whale watch crouched by an umiak, standing behind an ice fence they’d erected at the ice edge, or from seats carved into tall ice boulders. We spoke in hushed tones so any nearby whales wouldn’t hear us.

When I went out with a tray of tea and hot chocolate, I noticed one of the crew paddling an umiak toward the ice pack. A gunshot shattered the quiet. The crew forgot the code of silence and whooped with delight. An unlucky young seal had lost its life. No need for sandwiches or soup now.

I stood in shock, not sure if I should cheer or cry at the death of that seal, who happened to show up at the wrong place and time. I ate the game meat my Inupiat friends shared with me, but I had never seen an animal being killed.

I had little time to reflect on my feelings. The hunter returned and stepped onto the ice. A young seal dangled from one hand. I stood frozen, and watched him skin and cut up the seal. When he was nearly done, he looked at me.

I swallowed hard and went to the tent to fetch a pot. Still in shock, with a pot of steaming chunks of dark meat in hand, I returned to the tent. Dixie put on a pot of rice and asked me to cook the seal, which I sautéed with oil, soy sauce, and black pepper. An hour later, we ate an impromptu feast on the Arctic ice. My lingering hesitation about eating the seal disappeared at the first bite of the meat, which tasted like tender lamb.

When I returned outside after lunch, one of the whalers clambered down from an ice boulder, about 20 feet high and five feet back from the lead, and I took his seat. I settled in and began scanning the lead from his lookout post. Bowheads bobbed up in the lead all afternoon. The crew scrambled if one seemed within striking distance, but by late afternoon, the crew still hadn’t come close enough to any they could attempt to land.

In my ice cubby, I sat marveling at my surroundings and my small part in the rites of an ancient tradition. For a long while, I was in a state of suspended animation until I heard urgent whispers below me and saw the crew prepare to board the umiaks. In the distance, two dark figures rose in unison and blew spouts taller than all the other whales we’d seen that day. They swam and dove in slow motion. Unlike previous forays, the entire crew, except Dixie and myself, went out this time. A lone darting gun rested on the ice below me.

Transfixed, I watched the whales’ ballet and the crew’s movement. A part of me didn’t want the dance to end, but another wanted the whalers to succeed. I wrestled with sadness about the whales’ demise and elation that the crew would get their whale, two in fact, which they’d share with the rest of their village.

A loud, sudden whoosh made me shift my gaze nearer to the camp. I saw a black hillock sinking  into the ocean. A few seconds later that hillock – a bowhead, about 50 feet long – thrust its head out of the water, nearly dousing me. It swam unhurriedly and methodically about 10 feet from me and seemed in no hurry to move along. Nearby, Dixie let out a moan of disappointment. The darting gun sat unused on the ice.

The pair of whales farther out had gone. The crew – gun and harpoon ready at the bow of the umiak – was now frantically moving toward the whale in front of the camp.

The whale taunted the whalers for a good four or five minutes. When they were almost within striking distance, it let out a large blow, displayed a large swath of its back, slapped the water with its tail. And slipped away. Yet another one gone.

The umiak returned, and the subdued crew disembarked. Ralph noticed the darting gun on the ice. He pointed to it and teased me for not catching a whale. I smiled, enjoying the compliment that he was accepting me as one of them, but also relieved I had not seen any of the whales meet their end.

In fact, the crew never did not land a whale during my weekend with them. They got one the next weekend, when I wasn’t there. At that summer’s Nalukataq, the festival held after the whaling season, Ralph Aveoganna announced my name as part of his crew and gave me a portion of the whale. I received not only muktuk (whale blubber) but also the highly desirable whale flipper that I shared with my Inupiat friends in Barrow.

I sometimes wonder if that large whale whose long dance I can’t forget is still swimming around or is now part of someone else’s memory of a successful whale hunt.
Posted by Supriya Savkoor at 7:00 AM