By Patricia Winton
﻿﻿Take the entrails of tuna fish, salt them, and allow them to ferment in the sun for three months. So begins the recipe for garum in Apicius, a Roman cookbook dating to the fourth or fifth century A.D. There are many variations of this recipe in historic documents, so it’s fair to say that the ancient Romans loved to flavor their foods with fish sauce.
Apparently, the smell of the fermentation was so rank that it was illegal to produce the sauce in private houses, so factories were set up along the Mediterranean coasts. Ruins of these factories can be found in many countries from Morocco to Portugal. Thus garum was probably the first commercially produced gastronomic merchandise.
While garum production was a smelly affair, it seems that the final product was quite mild. In addition to the fish innards (and dark fish like tuna and mackerel was preferred), various spices like fennel, mint, and oregano were added to the mix. After the fermentation was complete, the liquid was ladled off and put into terra cotta amphora for shipping. In the kitchen, the garum was mixed with wine, vinegar, oil, or water before being added to dishes.
A fairly complete garum factory can be seen at Pompeii. In fact, garum helped researchers pinpoint the Vesuvius eruption to the month of August because the garum residue found there was made from a fish that only swims near the shore in summer.
The Romans carried their love of fish sauce with them as they expanded their empire. It took root in Britain and eventually became Worchestershire sauce there. As the Roman empire died out, so did the love for garum, but the affinity for fish condiments remained.
Today, it’s anchovies that flavor Italian food. The language has two words for anchovies: alici and acciughe. Generally, alici refer to the fresh variety. Despite the small size, these fish are common on the Italian table as a main course, in pasta sauces, or as antipasti.
But it is acciughe, the preserved type, that are used as a condiment. Anchovies can be preserved with salt or oil. I usually keep both in my kitchen because recipes often specify which to use. I used to buy the salted variety from an Italian grocery store in Washington, D.C. I kept them, with coarse salt, in a plastic container in my fridge. I found that the salt itself was a great condiment, too.
And while garum was apparently sometimes mixed with honey and wine as a dessert, I’ve never seen anchovies as a dessert here. My partner-in-crime, Supriya Savkoor, says “Thank goodness for that!”
One of my favorite pasta sauces uses anchovies as a condiment for broccoli. It came from an Italian teacher years ago. When I was explaining it to an Italian friend, she interrupted me, “Oh, you can use that same idea with endive. It makes a great savory tart.”
Pasta with Broccoli and Anchovies
﻿﻿﻿﻿﻿﻿ ﻿﻿ 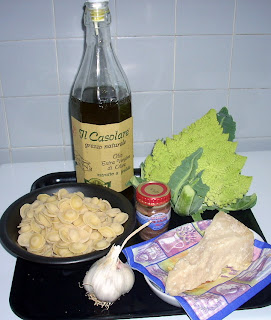 ﻿﻿﻿﻿﻿﻿1 pound (400 grams) short pasta. Orecchiette (little ears) is traditional but you can use others such as bow ties or penne
1 head of broccoli or cauliflower, broken into small pieces
3 tablespoons extra virgin olive oil
2 cloves of garlic, finely grated
6-8 anchovy fillets preserved in oil, chopped
1/4 teaspoon red chili flakes
Freshly grated Parmesan cheese
1. Bring a large pot of lightly salted water to the boil and cook the pasta.
2. About three minutes before the pasta is done, add the broccoli.
3. Drain, reserving a little of the pasta water.
4. Meanwhile, heat the olive oil in a large frying pan and add the garlic and red pepper.
5. Stir in the anchovies, mashing with the back of a spoon.
They should dissolve into a paste.
6. Add the drained pasta-broccoli mixture to the garlic-anchovy paste and stir. Add a little of the pasta water to make the mixture creamy.
7. Serve with lots of Parmesan.

Note: Normally Edith and I post on alternate Thursdays, but I'll be posting again next week, then Edith will post for two weeks. Hope that doesn't confuse anybody.
Posted by Patricia Winton at 7:00 AM