Off the Beaten Track: The Voice of the Tango—Bandoneón

Our guest today is, Annamaria Alfieri, the author of Blood Tango, which takes place in Buenos Aires in 1945 and imagines the murder of an Evita Perón lookalike.  Kirkus Reviews said of her Invisible Country, “Alfieri has written an anti-war mystery that compares with the notable novels of Charles Todd.”  Deadly Pleasures Magazine called her City of Silver one of the best first novels of the year.  The Washington Post said, “As both history and mystery, City of Silver glitters.”     A world traveler, Annamaria takes a keen interest in the history of the places she visits.  She lives in New York City. You can learn more about Annamaria and her work at her website www.annamariaalfieri.com
Research sparks my creativity as does nothing else.  In studying up for my new book Blood Tango, I learned about some wonderfully interesting people, places, and things.  Like the endlessly fascinating Evita, Buenos Aires—a city both exotic and familiar, and tango, both the music and the dance.  Since I put a lot of romance in my historical mystery novels, tango cried out to be an important part of the story.  I had in mind a couple falling in love while dancing.

One can’t get very far into learning about the dance without studying the music.  And as soon as you start listening to tango music, you hear the bandoneón, an instrument that literally breathes before it sings.  The details of the journey it took from Germany, where it was invented, to the waterfront boites of Buenos Aires are not well documented, but we do know it was born for the Church and ended up in the hands of desperate men who used it to entertain people of the night.

Its inventor Heinrich Band (1821-1860), called it bandonion and intended it to take the place of an organ in poor churches that could not afford the real article. There is no readily available information about the bandoneón's eventual use in religious establishments. What we do know is that German sailors and Italian seasonal workers and immigrants brought the first ones to Buenos Aires at the end of the 19th century.  Bandoneón arrived just as working class newcomers in the sailor’s bars were evolving a fabulous new music and dance art form: the tango. When bandoneóns came on the scene, they changed forever how tango music would sound. 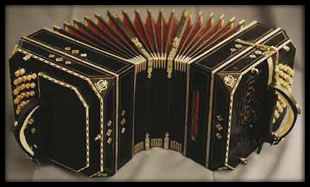 Cousin to the concertina, the bandoneón has buttons—not the typical piano keyboard of an accordion.  This instrument is what makes that wonderful almost-human breathing, gasping, and sighing sound that gives passion to tango music. It is central for tango ensembles, which can also have a piano, often a violin, a guitar maybe or a bass.

It seems a tricky instrument to play. The musicians pull the bellows apart and squeeze them together. The buttons on the ends change the notes, and here's what knocks me out—the buttons play different notes depending on whether the player is pulling the bandoneón apart or pushing it closed.  On top of that, the layout of buttons is different for the right and left hands.  The first instruments were constantly being changed and most of the early versions have different numbers of buttons in different positions on the face plates. In 1924, the number and positions of the buttons were standardized to include 72 buttons that cover a five octave range.   As you can imagine, it takes a lot of concentration, coordination, and talent to master it.

The most famous recent bandoneón maestro was also the great composer, Astor Piazzolla. Here is a lovely little film of one of his compositions in a performance that brings the bandoneón back to its intended locale—a church. The elegant scene is the wedding in Amsterdam in 2002 of then Prinz (now King) Willem Alexander of the Netherlands to Máxima Zorreguieta Cerruti, an Argentine woman of Basque, Portuguese and Italian ancestry. The name of the piece is "Adios Nonino," which given the Italianized Spanish of Buenos Aires, I make out to mean, "Goodbye, Little Grandfather." That may account for the beautiful bride's emotional reaction. Then again, the plaintive voice of the bandoneón could easily have moved her to those tears.


Posted by Patricia Winton at 7:00 AM