Lulled to sleep in the backseat of the car, I woke as Bà Ba swerved across five freeway lanes and exited on one of Arcadia's busiest streets. Chinese characters in neon lights blazed on a number of establishments populating strip malls. Bà Ba pulled into one of these where fans crowded in front of Din Tai Fung Dumpling House as if in anticipation of a rock concert. 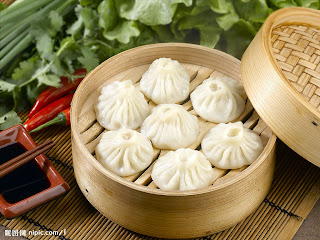 Bà Ba’s ninety-five-year-old mother grumbled in the front seat. She had refused to ride in a wheelchair, even though her bound feet forced her to teeter precariously. I offered her my arm and she patted it, saying in Chinese that Bà Ba must love me very much to endure this hassle. She nodded at Bà Ba's wife and my half-brother, who both disappeared into the crowd, and whispered that Bà Ba rarely came here.

The wait for a table could be nearly two hours long. Nonetheless, this annual holiday tradition of eating at Din Tai Fung was perhaps one of the few things we agreed upon.

I lived in Alaska, while he lived in Southern California. We rarely spoke on the phone and I visited him only once a year, usually at Christmas. Mainly, I disagreed with the way Bà Ba grieved. After Mā Ma and Jon-Jon died, he immediately sold our house. He donated the cherry wood bedroom set that Mā Ma promised I would inherit. He replaced Jon-Jon as soon as he could with another son.

The more I wanted to preserve everything, hoarding boxes and boxes of Mā Ma  and Jon-Jon's belongings, the more he seemed to erase them from his life, gifting Mā Ma 's paintings to close friends, asking me to hold onto their wedding album, and mailing all of Jon-Jon’s toys to me. Sometimes I hated him for moving on, when I could not.

Bà Ba's wife pushed her way through a mass of bodies and returned with a ticket and a menu snapped to a clipboard. We browsed through 79 different kinds of dumplings and noodle soups printed in Chinese and English. The star of the lineup was Juicy Pork/Crab Dumplings, which failed to adequately capture the elegance of their Chinese name: Shea Fun Xiao Long Bao, Crab Powder Little Dragon Bun.

About the size of a dollar coin at its base, a translucent wonton-like skin kneaded into a twist at the top contained a bite-sized morsel of pork swimming in a pool of soup. A dash of crab powder to tease your senses. Served on a spread of lettuce in a bamboo basket, it arrived steaming at the table beside a dish containing strings of ginger soaked in black vinegar. Although other restaurants on occasion served this dish, Din Tai Fung (the only branch to open in the United States) in our opinion, made the best Shea Fun Xiao Long Bao. Perhaps it was because you could see the dumplings being made with metronomic precision. In tall white chef hats, one man spun a rolling pin, tossing rounded flour medallions to another, who twisted the dough, and laid them gently like jewels within bamboo baskets.

The cooks were so quick that I never saw them stuff each dumpling. I suppose that made the dumplings taste even better, especially after Bà Ba taught me the art of savoring them. He said the first challenge in enjoying Shea Fun Xiao Long Bao is to pick it up gently with a pair of chopsticks without poking holes in its paper-thin skin. Place a few strands of vinegar-soaked ginger on top, perhaps to cool it down or enhance the flavor of the soup sliding like silk down your throat. Then, patience is required. You must know exactly when to pop the dumpling in your mouth. The soup has to be at the right temperature; otherwise, like a dragon's fiery breath it could sear tongue and throat, stripping away a complexity of salt, sweet, and sour flavors rippling across taste buds.
***
Bà Ba and I pulled apart a pair of deep-fried You Tiaos, a deep fried Chinese breadstick that is served only on weekends and sells out by eleven a.m. in select Shanghainese restaurants. He folded his You Tiao into a Sao Bien, a flaky sesame seed sprinkled pita. I dipped mine directly into soy sauce.

We listened to the crunch of You Tiaos between our teeth. We welcomed Chinese chatter from neighboring tables because there was nothing easy to discuss this Saturday morning. My grandma was not sitting at her usual place beside Bà Ba. She had died several days earlier at ninety-six.


Sipping some tea and smoothing my long black hair in place, I swooshed the grease down my throat and began, “How are you doing?”

Bà Ba seemed to age within the wool red and black checkered shirt Mā Ma bought before I was born.

“When they dig my mom's grave, I think that it might be a good thing if they cover up Mā Ma and Jon-Jon’s tombstones.” Bà Ba had slimmed down over the years, maybe for his young wife, whom he’d started dating not more than a few months after we buried Mā Ma. I could see the hard lines of his bones.

“I think that would be disrespectful. We should make sure that the gravediggers don't do that. For some of our relatives, it will be the first time they have ever visited Mā Ma and Jon-Jon's resting place."

Bà Ba finished his Sao Bien You Tiao sandwich before explaining to me something that I never understood and still don’t. Bà Ba had asked me years ago not to tell his son, my half brother, about Mā Ma and Jon-Jon. Now, he admitted that this had always been his wife’s request. He felt that obscuring Mā Ma and Jon-Jon’s tombstones might not be such a bad idea, for her sake.

I balanced my You Tiao on my plate, deliberately wiped my mouth, folded the napkin neatly on my lap, and told him calmly that last year his son asked me whether we shared the same mother, and I couldn’t lie.


Bà Ba swore at me. And I swore back. Our meal ended in a torrent of words we will try hard to forget. I had always thought You Tiaos were comfort food, meant to be shared with a loved one. Recently, I discovered that they originated from a legend about a corrupt official and his wife, and that some Chinese folks believe You Tiaos represent a tool in expressing contempt.

Over the years, I’m learning there’s an art to understanding Bà Ba. I saw a man who grieved in a way that insulted me. In refusing to tell my half-brother about Mā Ma and Jon-Jon, I felt he preferred if I disappeared too. But maybe, our grief stemmed from the same source. One person found it too painful to see them as part of his life. The other found it equally agonizing not to see them as part of her life.

Adapted from "Love Food,” originally published in Rosebud Magazine, Spring 2009, and soon to appear in the Tao of Parenthood anthology.
Posted by Supriya Savkoor at 7:00 AM