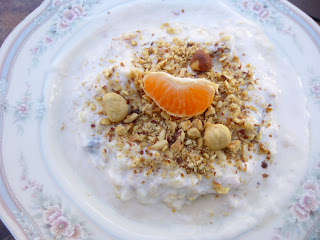 As a kid, I never saw any useful purpose to breakfast. Food early in the day had absolutely no appeal to me. My mother, who believed that breakfast was the most important meal of the day, would cajole and bribe me with delectables such as cinnamon toast and fluffy pancakes drenched in butter and real maple syrup from a neighbor’s farm. All to no avail. I refused to eat anything before noon.

Except when we visited my Swiss Aunt Gritli. Born in Boston to Swiss immigrant parents, she traveled to Switzerland only twice in her life but maintained a lively correspondence with Swiss cousins well into her eighties. She also knew how to make the quintessentially Swiss breakfast, a fruity cereal known as Bircher Muesli. Breakfast-challenged as I was, I had no trouble scarfing down a bowlful—even at 8 o’clock in the morning.

Muesli, a Swiss diminutive form of the German Mus or “porridge,” was developed by a Swiss physician named Maximilian Bircher-Benner around the turn of the 20th century. He believed that sick people could be coaxed back to vibrant health though a wholesome, plant-based diet, especially one that emphasized raw foods, fresh air, and plenty of excercise. He observed that many of his patients, even those near death, improved when put on a regime of uncooked foods. Dr. Bircher-Benner attributed the restorative effect of this diet to the fact that raw foods are direct products of the sun. Bircher Muesli formed an integral part of the Swiss doctor’s medical practice, and he used it to treat all kinds of conditions, from obesity and allergies to digestive disorders and cardiovascular disease.

The original recipe begins with a tablespoon of rolled oats over which you sprinkle water and let the grain soak overnight to soften and become easier to digest. Next come lots of chopped seasonal fruit, and enough milk to hold everything together. You top it all off with a dusting of ground nuts. The result is a complete meal with something from every food group. You could practically live on this dish exclusively and still meet all your daily requirements for protein, carbohydrates, vitamins, minerals, and fiber.

Today, Bircher Muesli has become something of a national dish in Switzerland, right along with roesti, cheese fondue, and chocolate truffles. You can find it on restaurant menus and home dining tables, and not just for breakfast. Some Swiss families serve it for dinner, a lighter meal than lunch. 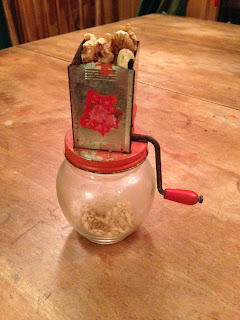 Aunt Gritli made her muesli much the same way Dr. Bircher-Benner did, with a few exceptions. She tripled the amount of oats and soaked them only ten or fifteen minutes instead of overnight. She added a squeeze of lemon to the soaked grain and tossed in a tablespoon of raisins. And when it came time to chop the nuts for the final presentation, she got me involved. The job required the use of a marvelous little contraption—an oval glass jar to which was screwed a metal hopper, painted red and decorated with flowers. You poured the nuts into the top and turned a little handle on the side. A series of offset tines much like the ones you’d find on a fork ground the nuts and dropped them into the jar. No child could have wished for a more marvelous toy. And after investing so much time and elbow grease into the job, I wanted nothing more than to taste the fruits of my labor. Which, of course, was Gritli’s devious plan all along.

Bircher Muesli lends itself to endless variations. You can use a variety of rolled grains along with the oats: rye, barley, or wheat. They can be soaked in fruit juice instead of water. Soy milk can stand in for the dairy milk, or you can add a dollop of yogurt. Mix in a bit of honey or maple syrup for a sweeter version. The fruit varies according to the season. Apples, pears, citrus, and kiwi in the winter. Strawberries, peaches, and cherries in the summer. Bananas any time of year. The nuts can range from walnuts and almonds to hazelnuts and pecans.

Bircher Muesli doesn’t need a recipe beyond what your imagination can provide. But if you need a quick tutorial to get you started, check out this short, fun video:

Guten Apetit!
Posted by Heidi Noroozy at 7:00 AM