Of Pagans and Pancakes

«Блин!» “Darn it!”  That Russian expression eloquently describes my feelings having spent the morning drooling over recipes and photos of food. You see, now I want блины. A blin is one Russian pancake and a mild expletive. 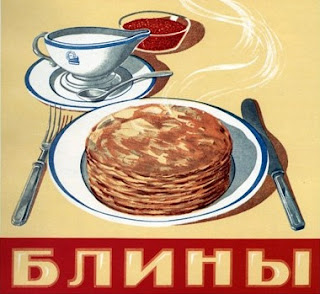 Blini are many, many Russian pancakes, as many as you can eat in one sitting. But, until I find a suitable gluten-free recipe, they are not on my personal menu. Note that I am heaving a rather unattractive sigh of frustration as I write these words.

Blini are not your typical puffy, over-sweet American pancake. More resembling French crepes or Jewish blintzes blini are simply paper-thin golden circles of goodness that are such a part of Russian culture that they have their own week-long festival in the springtime. Lina Zeldovcih wrote about Масленица (Maslenitsa, or “butter week”) last spring and you can read her post here.


Essentially, Maslenitsa is Russia’s version of Mardi Gras, a celebration to welcome Spring and get in as much fun and celebration as possible before Lent sets in for the subsequent month and a half. Maslenitsa pre-dates Christianity in Russia and has deep pagan roots throughout the Slavic world. After long, dark winters, people would prepare blini soaked in butter, the round shape reminiscent of the sun, their sacrifices made to remind that orb to warm their fields. Maslenitsa is a time to make merry with sledding, singing, dancing and consuming copious quantities of fattening food and alcoholic drink. At the end of the week, a straw effigy of Lady Maslenitsa, who represents winter, is burned in an enormous bonfire. Today, Maslenitsa celebrations can be found all over Russia, Belaus and Ukraine and it’s still a time to mark the end of winter and the arrival of spring.


Blini are not restricted to this week-long festival, though--they are a staple of Russian cuisine year-round and play a key role in numerous life events. A new mother is given blini and they are also a staple at funerals. Even in the hardest of Soviet times, the ingredients for blini were always easily available pantry staples: flour, milk, eggs, butter. Blini can be eaten plain or filled and folded into delicious and filling origami-like pockets. The most common traditional fillings for blini are jam, творог (farmer’s cheese), salmon, mushrooms, meat and cabbage. An additional use for blini is to create a multi-layered stacked tort with meat or mushrooms, a handy use for any rare blini leftovers. A fantastic recipe with photos can be found here. 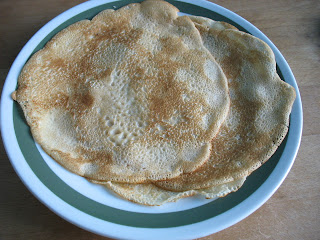 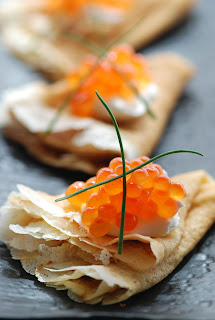 And while we are talking recipes, the absolute best cookbook for former Soviet cuisine is Anya von Bremzen and John Welchman’s “Please to the Table.”  My copy lies open in front of my keyboard, its spine cracked, its pages stained and yellowing, a book well-used and well-loved. The blini recipe from that book can be found here. Please note that this link is just to make blini, the recipes for fillings were left off in this version, but can likely be found elsewhere online. Just keep in mind the sign of a masterful blini cook is that the end product should be delicately thin, yet tough enough to be stuffed. If attempting blini for the first time, also remember the following Russian proverb, “Пе́рвый блин всегда́ ко́мом” – That is “the first blin always turns out lumpy” or essentially, the Russian version of “try, try again.”

Today, blini can be found everywhere from the elegance of New York’s Russian Tea Room to any of the hundreds of Teremok outlets strategically placed next to metro stops in both Moscow and St. Petersburg. Teremok is Russia’s homegrown fast food chain which features blini with traditional and modern fillings as well as other Russian favorites such as pelmeni, borscht and vinegret salad.  Teremok’s owner, Mikhail Goncharov is often hailed as a Russian Ray Kroc, founder of McDonald’s.

So, as the days slowly lengthen for those of us in the Northern Hemisphere, send up a greeting to the sun gods with sledding, singing, dancing and some delightful, round blini.

Special thanks to Natalia Melikova, who provided  photos of Teremok. When not taking fabulous photos of food, she blogs at The Constructivist Project at http://theconstructivistproject.com
Posted by Kelly Raftery at 7:00 AM