Off the Beaten Track: Smoked Fish, Potatoes and the Midnight Sun 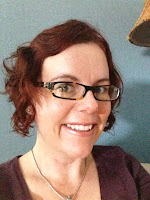 Although born in the Midwest, Shannon claims to be Las Vegas native. After graduating from Las Vegas High School, she followed her heart and majored in Cultural Anthropology at the University of Southern California.  Her passion for culture and travel led her to the Peace Corps where she served as an English Teaching Volunteer in Petrozavodsk, Russia. Shannon continues to teach English as a Second Language and has taught a range of students from housekeepers on the Las Vegas Strip to performers with Cirque du Soleil. She has also worked in training and development in the hospitality industry and has developed curriculum for cross-cultural skills and management. Shannon currently holds a master's degree in Educational Leadership and teaches English to university-bound international students.

For two years, I lived in the northern Russian republic of Karelia and claimed the self-created title of "World's Northernmost Peace Corps Volunteer." Since the fourth grade, I had wanted to become a Peace Corps volunteer, traveling to distant places and learning about lives vastly different than my own.

I taught English at a local school in the Karelian capital of Petrozavodsk. My students would proudly recite texts they had memorized in English, and since my Russian proved sketchy, it was my first introduction to the region.

"Petrozavodsk is washed by Lake Onega. Lake Onega is the second largest lake in Europe."
"The nature is quite wonderful in Karelia."
"Peter the Great founded the city. He built a factory. Petrozavodsk means 'Peter's Factory.'"
"Petrozavodsk has sister cities in Duluth, Minnesota, and La Rochelle, France. Our embankment features statues from each sister city."
"Kizhi Island is a treasure. It features an ancient church built without nails and is a UNESCO World Heritage Site ."

Over time, I was able to expand on their information. The area is indeed well known for its folklore, amazing nature, and Kizhi Island. Only 43 miles from Petrozaovdsk, Kizhi is the region's main source of tourism, bringing tourists during the white nights to the city and greatly supporting the local economy.

My greatest cultural lesson, however, came not from my students, but from a summer visit to a village on the banks of Lake Onega, not far from Kizhi.

Velikaya Guba was a village in decline twelve years ago, and I'm not sure it has fared better since. The village was home to a handful of older people, most of whom moved to Petrozaovdsk for the winter. It is also where my friend Marina has a house that has been in her family for generations.

Velikaya Guba had electricity, but not much else. A post office doubled as a general store, which offered few canned goods, some bread, plus beer and vodka. It was also here I found a prized souvenir—a notebook featuring Boris and Natasha, the Russian spies from the Rocky and Bullwinkle cartoon. My attempts at explaining the humor to my hosts failed, or maybe I was so removed from the life I once knew, from the person I had been, from the world I understood, that it just simply wasn't funny.

Goats and cows grazed freely among the wooden houses in the village, and the bells that hung around the their necks woke me up  each morning. Time was irrelevant. We were so far north that the sun never set, only flirted with the horizon, turning the sky marvelous shades of purple and pink. When I woke to a cow mooing into the window, the sense of disorientation was enormous. Where was I? When was I?

Marina’s water came from a well, the potatoes from her garden, and the milk from a neighbor's cow in exchange for a bottle of vodka. Marina's husband, Volodya, took off fishing in Lake Onega, returning with a cache that would last us days. Marina gutted the fish herself at the kitchen table while I sat guiltily unable to bring myself to stick my thumbs in their gills and break their necks. I felt like an incompetent child from another world in which fish came breaded and bagged, without scales or bones.
Volodya smoked the fish in a pit dug in the corner of the yard. I drank black tea throughout the day, and savored fresh milk, warm and yellow with fat. It was beyond delicious. I used an outhouse at 2 a.m. as the sun shone on me. That experience was less than fantastic, but far from hellish. Mint swallowed the outhouse, climbing up so high that it blocked the midnight sun.

A giant white oven sat in the middle of the house. Without central heating, this was the means by which people had heated their homes for centuries. In 2001, it still served as the only heating in the house. Marina pointed out a space between the oven and the roof. This was the spot where, in the past, the family would hibernate throughout most of the dark winter, when the sun would rise at 10 a.m. and set at 3 p.m., briefly dancing above the edge of the earth before plunging the world back into darkness. During my visit, however, the cows, the people, and the ground took advantage of the summer break from darkness and exploded into activity. Green overwhelmed everything. People hardly slept.

After a few days of staying in the village, we packed Volodya's army issued tent, the freshly smoked fish, some fresh potatoes, and a well-used, metal tea kettle and took off in the boat to find an island overlooking Kizhi. If in Velikaya Guba, I had gone to a time before indoor plumbing, I had now been transported back further, to a time before civilization. In the distance, we could see the golden, wooden domes of Kizhi Pogost , Kizhi's main structure. Were we the only people to have ever camped on this island? How many times had the inhabitants of this region dined on smoked fish during white nights, drinking tea, and watching the sun circle around them.

The wind was bitter, blowing through the tent like a hurricane, and yet we spent three days on that island. Marina and I sang the song " King of Pain"  by the Police while sharing some wine. Time became even less significant, and I finally released the last ounce of that American urge to control and produce. I just sat back and enjoyed. There was freedom from worrying about all the things that should  have bothered me about that moment: the lack of toilets, the absence of bathing, the pervasive smell of birch smoke, and the endless supply of nothing but smoked fish  and potatoes. Indeed, "the nature " was quite wonderful. 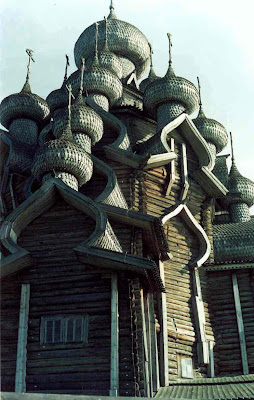 It was at this moment that I felt closest to Russia and all that was good with a country that could otherwise be so frustrating. It was if I had been allowed to view Russia in its true, natural habitat, without the Cold War bravado or leather-clad Mafiosos. It was sitting together with friends, against the cold, drinking a pot of tea, and sharing their last bits of food with each other. To this day, I still struggle to find precise words to express the sheer beauty of that moment and how it changed my perspective on life.

Posted by Kelly Raftery at 7:00 AM