The God of Collectibles

Most folks these days are familiar with the Hindu god Ganesha. He’s the god of good luck, the remover of obstacles, the god whose blessing we seek before we embark on a new journey, be it travel or enterprise. And he’s more than that—he’s also the god of success and of new beginnings, the patron of arts and science. For these reasons, Ganesha, or Ganapati (“gun-puth-ee”) as he’s also known, is more than just one of many in the pantheon of Hindu gods. He’s one of the best known and most widely worshipped, so iconic that he’s become an art form.

There are many legends about Ganesha, but the one I first read about appeared in an old Indian comic book. In that explanation, Ganesha's mother created him independently, trying to form the perfect son, then had him stand guard outside her home as she bathed inside. When her husband, Lord Shiva, returned and found the unknown young man at his front door, he thought it was an intruder and took aim with his trident, cutting Ganesha’s head off. (Side note: As in Greek and Roman mythology, Hindu mythology is filled with gods who have human flaws and weaknesses.)

Traditionally, Ganesha is depicted as in the first photo up above. But these days, you’ll find him the subject of about any form of art and in any media. Because of a similarity between the shape of his head and the Sanskrit letter for “om” (or “aum”), that primal sound invoked during prayer or meditation, he’s sometimes depicted in that shape as well.

Another popular expression uses minimal ink strokes, especially a single one. Our family once received a unique gift, a print of Ganesha's head using the letters from the names of our family members. I know someone who creates Ganeshas out of collages of neatly cut paper, known as cutwork art. The images I’ve included in this piece were all handmade by a relative who created hundreds of varied forms of Ganesha over half a century before he passed away last year. They’re in chalk, charcoal, watercolor, oil, ink, pencil, gold foil, you name it. You’ll see one is even in the shape of a hibiscus.

The breadth of creativity and diversity in recreating Ganesha’s image is boundless, and for me, a little addictive. Many Indian homes feature Ganesha collections so I avoid collecting them myself. That is until I find one that’s unique, then all bets are off. That’s an event that happens more and more these days. Ganesha playing various musical instruments, Ganesha dancing, Ganesha reclining, Ganesha standing, Ganesha in profile, modern  Ganesha, traditional Ganesha, bronze or soapstone Ganesha sculptures, tiny Ganesha figurines … the list goes on and on.

A few years ago, while passing through Idagunji, a tiny village in southern India, I picked up a unique statue made of black stone known as the Idagunji Ganesha. The town is an ancient pilgrimage site where saints were thought to come for penance. Ganesha is said to have prayed there, and at the center of town, there’s a 1,500-year-old temple in his honor, one that attracts thousands of pilgrims each year. In the sculpture, the god is dressed in the style Hindu men wear during pilgrimages, including donning a loincloth and holy thread. He looks more stout than other representations, and there’s a small depression in his forehead, as though he’s wearing the sacred mark  that symbolizes the mind’s eye (the one we use to meditate and attain spiritual enlightenment). He’s carrying a lotus flower in one hand, and his favorite sweet, the modak (a dumpling with a sweet filling), in the other. Here he is, below at right, along with some other little souvenirs from my collection. 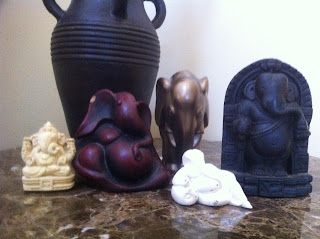 Yes, the golden piece in the center is a regular old elephant but my collection extends to those too. Nothing like expanding a godly collection beyond its earthly limits, right?
Posted by Supriya Savkoor at 7:00 AM