Castles in the Clouds 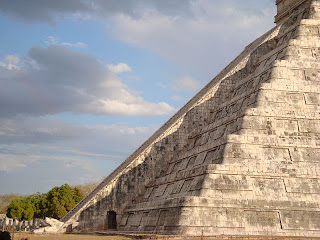 I’ll admit, it feels kind of weird writing about the spring equinox when I’m about to head into a different season in my part of the world. Outside my window the leaves are turning from green to shades of gold, orange and red and the air has a distinct chill, despite the blue skies and sunny days. My little office in Australia seems so distant from Mexico where people from all around the world are about to celebrate a centuries old tradition—the vernal equinox.
Located on the Yucután Peninsula in Mexico, Chichén Itzá is surrounded by lush landscapes and azure waters. It was built by the Maya civilization (around 600 A.D.) and was a sophisticated urban centre of their empire from A.D. 750 to 1200. The Toltecs invaded the Mayas around A.D. 1000 and this led to a merger of the two cultures, as evidenced by the array of wonderful architectural styles at this UNESCO World Heritage Centre.
One of the best known structures is the Temple of Kukulcan (Maya for Quetzalcoatl, check this post here for more on this). Often referred to as El Castillo (the castle), this step pyramid has stairways leading up each of the four sides, meeting at the temple on the top. During the spring and fall (or autumn, depending on where you’re from) equinoxes, the rising and setting sun casts a shadow in the shape of the plumed serpent, Kukulcan, along the west side of the north staircase. The shadow slithers down the northern side of the pyramid until it reaches the serpent’s head at the base.
The pyramid itself is 79 feet (24 meters) high and the base square measure 181 feet (53.3 meters) across. Add another 20 feet (6 meters) for the temple on top of El Castillo and you’ve got one impressive example of ancient architecture. The stairs leading up to the temple have 91 steps on each side and, when added together with the temple platform as the final step, totals 365 steps—the number of days for the Haab year according to the Mayas. The Haab was the solar year calculated by the Mayas and is the basis for our modern calendar.
By using the sun, moon and astronomy, the Mayas could work out the seasons and know exactly when they would change. Their skills in astronomy were so advanced they could predict solar eclipses as evidenced by el caracol, the observatory at Chichén Itzá. There’s no doubt in my mind the world would be a different place had it not been for the skilled builders and mathematicians of this era. Fortunately, we’re able to witness the spring equinox like the Maya did thousands of years ago.
So as I glance at my desk calendar and watch the days roll into months, I reflect on the Mayas and how their knowledge and inventions affect us today. I wonder what they’d think about me typing on my laptop, sitting on my chair with wheels and drinking hot chocolate (the Mayas were fond of this delectable delight). And what would they think about the hordes of tourists that flock to Chichén Itzá to watch the serpent snake its way down the Temple of Kukulcan? I guess we’ll never know, but as a writer, these are questions that fuel the creative fire. Hmmm…. perhaps the next book should be set in Mexico.
Posted by Alli Sinclair at 7:00 AM