Learning to Cook in Farsi 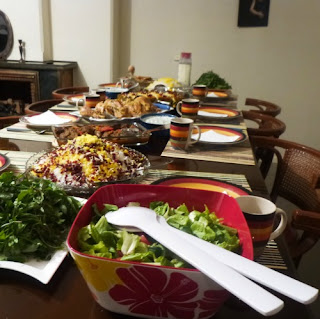 My introduction to Persian cooking came in the form of a cookbook called The Food of Life by Najmieh Batmanglij. If you’ve ever browsed the Middle Eastern shelves in the cookbook section of a well stocked bookstore, you’ve probably seen this volume. It’s a classic, filled not only with recipes but also cultural details about wedding and holiday traditions, even poems and folk tales. My Iranian-born husband brought The Food of Life home one day when he was feeling particularly homesick for the flavors and textures of his native cuisine. In preparing these recipes, I learned a whole new vocabulary: polo (rice pilaf), khoresh (a meat and vegetable stew served over rice), tadigh (the crispy crust at the bottom of the rice pot).

At first, I was baffled by the unusual combinations. Green beans and lamb mixed with rice and served with a generous sprinkling of cinnamon, a spice I’d previously associated with dessert; pastries and puddings scented with rosewater, saffron, or cardamom; stews packed with what seemed like an entire herb garden, in which the meat was the seasoning not the main event. This cuisine was like nothing I’d encountered before, and yet it thoroughly intrigued me. I tried out dish after dish. The best I can say about those early efforts is that the meals were edible.

Later, when I visited Iran for the first time and met my husband’s extended family, my culinary horizons burst wide open. I learned another culinary term: cadbanoo, an honorary title that literally means “the village chieftain’s wife” and is bestowed upon a woman of remarkable culinary skill.

My mother-in-law reigns as the queen of cadbanoos in the Noroozy family, due in large part to her instinct for the right combination of herbs. Her signature dish is koofteh Tabrizi: large globes of ground lamb, rice, yellow peas, and five different herbs (parsley, chives, savory, tarragon, and dill), with a dried plum (aloo), raisins (keeshmeesh), and caramelized onions (piaz dagh) at the center. These fragrant balls are braised in a tomato/saffron sauce and served with bread, yogurt, and pickles (torshi). Biting into a koofteh fills your mouth with layer upon layer of flavor and texture, from the knobby grains of rice and pungent herbs on the outside to the juicy, sweet fruit in the middle. Like the rest of Persian culture, where nothing is simple or straightforward, the cuisine is mysteriously complex.

I’ve also learned some wonderful tips from my sister-in-law, another family cadbanoo. One of her specialties is tah cheen, a dish whose name means “layered from the bottom of the pot.” It is a “sandwich” with chicken, eggplant, almonds, and dried barberries packed between two crusts of rice. Tah cheen is the perfect dish for a party, a feast for both the tastebuds and the eye.

Persian food is meant to feed a crowd. It’s almost impossible to prepare a recipe in small quantities and have the dish taste right. Even a laden table feels oddly incomplete unless it’s covered with three different kinds of rice dishes, several meat and vegetable stews, a mixed salad, a platter of sabzi khordan (mixed fresh herbs), and bowls of yogurt, olives, and pickles. Of course, you also need a horde of guests to eat it all.

Here’s the recipe for my sister-in-law’s version of tah cheen. Give it a try and let me know how it turns out. 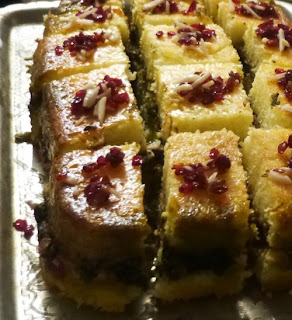 Place the chicken and half the onions in a pot, add the water or broth, and bring to a boil. Lower the heat and cook over medium-low for 30 to 40 minutes until tender. Remove the chicken from the pot, debone, cut into chunks, and return to the pot with the tomato paste, some salt, and saffron. Add more water if necessary. Simmer for another 30 minutes.

Sauté the rest of the onions and bell peppers separately with a bit of salt and set aside. Fry the eggplant slices until soft.

Bring eight cups of water to boil in a large pot. Add the rice and cook until al dente, about ten minutes. Drain and rinse with cool water (makes the rice fluffy).

Beat egg yolks, mix in yogurt, oil or butter, saffron water, and season with salt and pepper. Add rice and mix carefully until blended, being sure not to break up the rice kernels (or you’ll end up with mush).

Layer half the rice mixture in the bottom of a greased oven-proof glass baking dish. Arrange eggplants, chicken chunks and peppers/onions on top. Sprinkle barberries, pistachios, and almonds over filling. Layer the rest of the rice on top.

Cover dish with tin foil and seal edges well to keep steam from escaping. Bake for 45 minutes to one hour at 375 degrees until the bottom crust is crispy and golden. Place the plan in cold water for a few minutes to loosen the crust and turn out onto a serving dish.

Garnish with more barberries and nuts, if desired.