My First Time In A War Zone

At the age of six, I was magical. I had the power to create and shape anything I wanted in my sandbox. I spent hours creating and destroying, shaping mud into magical foods and fantastic animals. In my sandbox, I was like Aladdin flying on a carpet around the world. With magic thoughts, I visited my grandparents in America. Magic sang from me in my sandbox. I traveled down a river on a raft, through a jungle with snakes hanging from the trees. With a blink of the eyes, I was on a camel in the Sahara.

In 1966, our house in Kaduna, the capital of the Northern Region of Nigeria, was in the suburbs of the city in the agricultural heartland. There was a large field surrounding our house. Nearby, cattle grazed on dry, grassy plains, hot and dusty, with snakes slithering through long grass.

We loved Nigeria. We had an active social life, clubs and parties, friends of every nationality, road trips into the country, lazy days spent by the river or at a hotel swimming pool. We loved our nanny, Martha, who watched my little sister and me when my mother was out during the day. Ussman, a highly-respected hajj in our community, managed our household.

At night, before we crawled under our mosquito netting, we watched termites swarm around the light posts on our street. As some touched the heat of the bulbs, the lights sizzled, their bodies popped, and they fell to the ground. Sometimes the hot, charred scent wafted past our noses in the night. The Nigerians gathered and ate the fat termite bodies. Ussman said they were a gift from Allah, to feed the people. It was magic.

When I played in my sandbox, I created swarms of termites to feed my pretend people. My older sister Susie dug streets and built houses on her side of the sandbox. She honked the horns of her match box cars, revved engines and sped the cars through her town. She was not happy when my imaginary termites tried to feed her imaginary people by dropping in big clumps all around her cars.

Sometimes when we played, we saw dik-dik, small bush deer, watching us from the field next to our house. Magic shimmered in the air, as if the deer could talk to us.

Every afternoon, Ussman came out on the porch at dusk and called us in. "Pickin," (children) he called, "time to come in now." He worried about the cobras, adders and scorpions living under our house and porch and in holes in the ground. Once we were safely inside, large, black cobras, as high as my shoulders and as dark as the night swayed before the windows, spying on us from the pitch black night.

My parents loved to entertain. The Irish Catholic priest, Father Bell, was a frequent guest. At Christmas, he always blessed our house, expecting a nog in return. If Dad shared his good whiskey, Father Bell blessed the house no matter what the season was. He was jolly and loved to drink and dance. We once had him in a conga line, and a woman dancing in line behind him flopped his cassock up and down with the beat of the music.
"Father Bell, do your blessings really work?" I asked.

"Aye, child," he said, "they keep you safe and happy." He was the most magical person I knew.

Playing in my sandbox one spring day in 1966 while Susie was at school, I heard explosions. I hurried inside as a crowd of angry people ran down the street, sticks and machetes in hand. Ussman reassured us that he would not let anything happen to us. 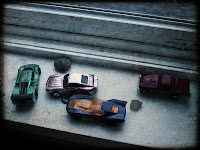 That night, we heard on BBC radio that the Premier of Nigeria was assassinated, and his home a few blocks from our house was destroyed. Military leaders of Ibo ethnicity seized power.

There were frequent riots, and school was often disrupted. I sat in my room, scooting Susie's matchbox cars along the windowsill, wishing my sandbox could be inside.

At school, air raid practices became the norm for Susie, who never believed her desk would really save her. Whenever she dove under her desk, she invariably found herself with her nose butting up to the smelly boy in front of her. She began to think she would take her chances if there ever was an air raid.

One night we were robbed as we slept, and the blankets were stolen from our beds. In a patch of brush across from our house, Dad and several neighbors and servants armed with poison-tipped spears and bows and arrows converged on a hiding place and found curtains, weapons, our silverware set, even a typewriter. The thieves had a spear and some ground nuts in a little wooden bowl with primitive animal patterns burnished into the surface.

It turned out our night watchman had failed to pay his "dues" or protection money to the corrupt police chief who was running a protection racket. Dad fired the watchman and hired one Tuareg, a fierce nomadic warrior, to guard our house. Although we hired only one, at night we saw hundreds of small cooking fires in the bush surrounding our house. When we put our lights out, they hid and waited for thieves. I felt safer with the Tuaregs guarding our house, their fires flickering magically into the distant brush. But I still made Dad check under my bed every night.

Playing in my sandbox, I used sticks as spears and knives. My make-believe people locked their doors at night. Sometimes they fought battles and had to have a priest bless their homes.

In July, 1966, there was a second military coup, putting Colonel Yakubu Gowon in power. There were several riots. Kaduna, as the capitol of the Northern Region, became embroiled in turmoil. The Muslim Hausa from the north swept south, slaughtering Christian Ibos from the east. The Ibos retaliated. Portrayed as a religious war in the international press, it was probably rooted more in nepotism than religion. Thousands of refugees fled across Nigeria. Bodies lay in the streets near our home.

Throughout 1966, we heard sporadic gunfire and fighting. Mom worried about Dad being stranded from us at his USAID job in the city, and he often was. Ussman began warning us to stay away from certain areas of the city because there was going to be a spontaneous riot. His predictions were always right.

Magic thoughts dimmed as I started school. Our Embassy advised that if there was an air raid, we should dive into the ditches along the road, essentially open sewers. Mom said she would rather take her chances with the planes. Life went on.

We lived with riots and gunfire in the night. Our dreams were full of army men coming into the house while we slept. Susie sometimes whispered, "If anything happens to our parents, Ussman can walk us north to Niger. We will find people to help us there."

"What's going to happen to them?" I asked.

"I don't know," Susie answered, "but we need to figure out how to get back to the States."

I no longer fantasized about magic. Streams of refugees passed through our city. My childish prayers and magic would not help anyone. I stopped pretending.

In 1967, after months of violence, the evacuation orders came. We said a quick goodbye to Ussman with no time to say goodbye to the other people we loved. The plane loomed large before us. Dead and injured bodies littered the tarmac. My magic was also dead. 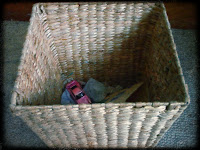 In our absence, the Embassy sent packers to pack and ship all our belongings to us. When our things arrived in America months later, everything of value had been stolen, but the packers had carefully wrapped all the garbage in our wastebaskets and shipped it to us. Unpacking the box from my room, I smiled when I noticed a sandy matchbox car cocooned in the trash.
Posted by Jenni Legate at 12:01 AM