Off The Beaten Track: An Ode to my Sony eReader 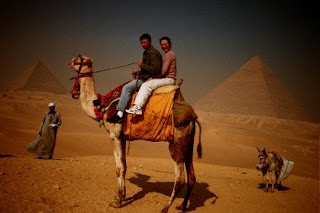 Our guest today is Mary Ellen Siegford, an American teacher living in Cairo, Egypt.  When she isn't volunteering at animal shelters, riding horses or caring for her myriad pets, Mary Ellen can often be found with her nose in a book. Or, as we learn today, in her ebook reader.

My family and I packed our bags and left Aurora, Colorado, for Cairo, Egypt, in June 2009. Cairo is my husband's hometown, but I'd only been there a few times to visit my in-laws. I imagined our life in Egypt would be a chance for me to learn a new language and help people less privileged than myself. Plus, it would be character building. My parents and siblings had reservations but my husband and daughter were ready to go.

Before I stepped on the plane my sister gave me a going-away present, a Sony eReader. She said that she wasn’t sure how easy it would be for me to get my hands on books in Egypt and since she knew I was an avid reader she thought I should have an e-book reader so I could download novels as often as I liked. I was thrilled at this generous gift but wasn’t aware of how valuable the reader would prove in the months ahead. 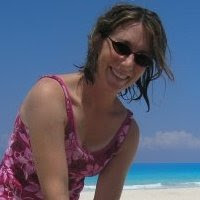 We arrived before my daughter's school year started and so got to spend a month at the beach along the northern coast of Egypt. It was glorious. The sand is made of sea shells finely ground into tiny white beads and the Mediterranean sea is such a brilliant blue that the sky looks pale and dull in comparison. We stayed in a chalet that had a 180-degree view of the sea and gorged ourselves on mangoes. I walked along the beach a lot and read a bit of the Twilight Saga on my eReader as I sat on the beach sipping lemonade and listening to the crashing waves. However, it wasn’t until I was settled into Cairo and I started work at a nearby school that the eReader became my best friend.
Life in Cairo wasn’t easy and my reactions to the cultural differences were much stronger than I expected. I found myself reacting badly in situations that made me uncomfortable, and then embarrassed in front of those who had witnessed my discomfort and bad behavior. My eReader became my escape. I jumped into Julia Quinn romances like onto a life raft, reading one a day for a break from the overly exotic world around me. A co-worker recommended Downtown Owl or the Girl with the Dragon Tattoo but I couldn’t handle anything weightier than the chick lit novels of Sophie Kinsella and Marian Keyes.
Then the swine flu frenzy hit Egypt and I truly felt that I was living an episode of the Twilight Zone or was on Candid Camera. In trying to discuss the Ministry of Education's policies regarding swine flu with the school administration, I was flabbergasted by the randomness and bureaucracy of Egypt. The schools were closing and reopening at random. You couldn’t plan a trip somewhere because no one could tell you the dates you would be working or not working. No kids that I knew were actually sick. Pigs were slaughtered en masse although I don’t think they really had anything to do with the swine flu but they were guilty by association. YouTube video clips showed live pigs piled on top of other live pigs in trucks until they were all suffocating each other as they were loaded up to be removed from Cairo. I sank farther from the world and further in love with my eReader. I now had to get more storage space to hold all of my books and I began reading everything ever written by Juliet Marillier.

Luckily summer came, classes were finished and I went to the USA to rejuvenate and reassess myself and Egypt. I gave my reader a break and got active with many outdoor activities. Heading back to Egypt in August I was sure I would do better. My job was going much better; I was interacting with people more and reading less--and then the Revolution happened.

People like to say “you are living in exciting times,” but exciting times can be quite boring when you look at it closely. Yes, there was the debate “do I stay or do I go” that occupied a bit of time. However, the question of leaving Egypt was kicked out the window when I realized I wouldn’t have the funds to stay abroad for an extended period of time and couldn’t get home because the east coast of the US was being slammed by winter storms. The Egyptian Revolution for me was a period of house arrest. I did not live near enough to colleagues from work to join them and the most I got out was to get groceries. The TV was on constantly, showing news stations that repeated themselves ad nauseum and my reader was back in my hands. I read The Marriage Bureau for Rich People, and the Empire Trilogy by Raymond Feist, and some P.D. James--but still the schools didn’t reopen. I read some Sue Monk Kid and North and South by Elizabeth Gaskell--and still no school. 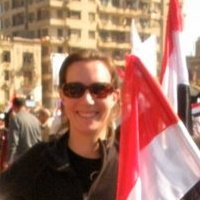 Eventually things calmed down and school resumed. I emerged from my home (pasty white despite the Egyptian sun) and finished up the school year. We are now in Egypt for the third year. I am expecting more ‘exciting times’ ahead as Egypt works toward transitioning from a military dictatorship to a democracy. I have graduated from light fluff and chick lit and am now reading a bit tougher stuff. My ebook reader has on it Jed Rubenfeld’s two books, Water For Elephants, The Game of Thrones, City of God, and finally I have read The Girl with the Dragon Tattoo.

The culture shock that I struggled with still pops its head in now and again to say hi but for the most part I get by okay. I thank my sister for the foresight to buy the eReader for me and I thank the manufacturers for the brilliant machine--and I also love the brown leather case that holds it so that, whether what I am reading is a schmucky romance or a New York Times Best Seller, nobody knows but me!