Persepolis: Blending Past and Present 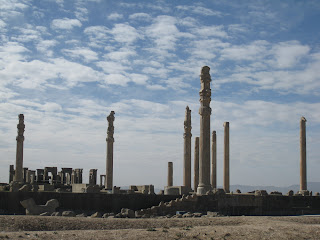 By Heidi Noroozy
Heidi will be back from Iran next week, bursting with new stories to tell. In the meantime, here is a repeat of her Persepolis story from November 2010.
On a clear day, you can see the thirteen stone columns of the Apadana Audience Hall from across the vast plain, just an hour’s drive from the Southern Iranian city of Shiraz. They rise into the blue sky above the ruins of Persepolis, reminding me of lonely tree trunks after a forest fire. Solemn, bleak, and dead.
Built in the fifth century B.C. by Darius I and his son Xerxes, Persepolis was the residential palace of Persia’s Achaemenian kings, where Darius and his descendants staged ceremonies and received visiting heads of state. The actual business of the empire was conducted far away in Susa (modern-day Shush, Iran). The palace’s history is still visible today on its gray stone walls, which depict scenes of Persian New Year ceremonies, camels and carts laden with provisions, and delegates from empire’s far-flung territories bearing tribute to the king of kings.
Persepolis’s glory lasted for only two centuries and came to an end when Alexander the Great conquered and looted the palace complex, then burned it to the ground. Today, the ruins are a source of national pride for Iranians, a symbol of their long-ago Persian empire. So it’s no surprise that they shun the name the Greek conquerors gave the site (Persepolis – City of the Persians) and prefer to call it Takht-e Jamshid or Throne of Jamshid (a legendary Persian king, who probably never actually lived in the palace named after him). 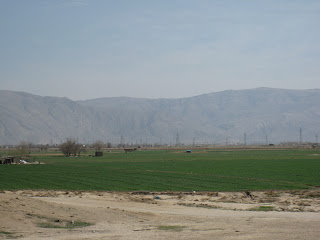 Persepolis may have been abandoned many centuries ago, but it felt anything but dead on the sunny February day when I visited the site. Our expedition began early in the morning when Hassan, the guide my husband had hired for the day, picked us up for the drive from Shiraz to the ruins. A young man with bright eyes and a shiny new wedding ring on his finger, Hassan showed us a picture of his young wife of six months and chatted happily of the baby on the way. When we passed through green fields at the foot of Persepolis’s high plateau, he pointed out the meadows that had belonged to his family. According to local custom, he said, farms are divided up equally between sons, so by the time he came along, his share of the fertile land was too small to support a family. He headed for the city and better job prospects.
By the time we climbed the wide staircase leading to the Xerxes Gate, my mind was filled with images from Hassan’s stories, and all I could think of was how much life had continued here for millennia. How farmers had cultivated the green fields all around the site—and likely also over it during the centuries that the palace ruins lay buried in the ground.
With a blue sky and a light breeze blowing down from the hills, mingling the scents of ancient dust and freshly turned earth, I could practically see the spirits of ancient warriors, kings, and servants climbing the steps to the Apadana Hall, just like their images carved into the side of the staircase wall. We wandered along the boardwalk covering Procession Way, where stone griffins, now chipped and cracked, once looked down on delegations as they made their way to the Hundred Column Hall. Gazing down at round stone bases that used to support long-decayed wooden columns, it was harder to picture life as it had once existed here.
But farther along, after we passed through the Tripylon Gate to the private quarters beyond, I spotted a ginger cat sunning herself in a window of Darius’s Tachara Palace. It’s an image that comes back every time I think of Persepolis. A symbol of how death and life coexist and how history is never lost forever but blends with the present. 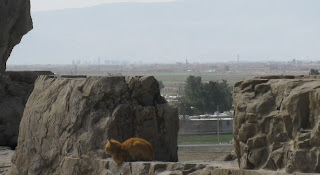 When we piled back into Hassan’s car for the drive back to Shiraz, I couldn’t help wondering whether some branch of his family had worked the land back in the days when Persepolis was a living city, and whether a long-ago ancestor had climbed the hill to the palace plateau with food for the royal kitchens. Maybe that ancestor’s spirit also still mounts the steps to the Apadana Hall.
Posted by Heidi Noroozy at 10:37 AM