A few months into my marriage, I asked a question any new bride might ask, “What is your favorite food?” My Kyrgyz husband answered, “Manty with pumpkin.”  I believe my response might have been something eloquent and deeply meaningful, along the lines of, “What the heck is that?”

Manty is a potsticker.  A lamb potsticker.  Steamed, not fried.  A dumpling.  No more, no less.  With my husband’s explanation of dough wrapped around meat in mind, my younger self set off on a Mission to make the Perfect Manty.  It was more than food, it was my first real challenge as a wife and I would not let it defeat me.
First off, to make the perfect manty, one must obtain a special piece of equipment–a dumpling steamer–basically a large stockpot topped by layers of metal steaming racks.  Next step is the dough.  As a new bride, I doggedly pursued making the perfect manty dough from scratch--flour, water, and a bit of salt.  The dough should be substantial enough to hold the filling in, yet thin enough to not be chewy or tasty of flour.  During an early attempt, my new husband watched his American-brought-up-on-TV-dinners-and-canned-vegetables-wife struggle with the dough, then he abruptly grabbed the rolling pin out of my hands and muttered something along the lines of, “Don’t they teach women anything here?”  Apparently, in Kyrgyzstan making and rolling dough of all kinds is a task mastered by every child. 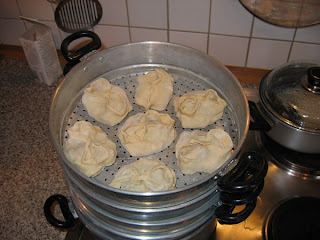 Once dough preparation had been appropriately delegated, we moved onto the filling.  Mix together finely chopped lamb, onion, and pumpkin with some salt and pepper.  Then center a small amount of lamb and vegetables on a square of dough, seal the edges with water, make the dumpling look pretty by folding the dough into a nice design on top, place on oiled steaming racks over a big pot of boiling water and leave for 45 minutes.  There you have it – perfect manty!  Except it wasn’t.

For months, I tried to make the food my husband craved, what reminded him of home and it just never turned out right.  The dough was too thick, the filling was just wrong.  We bought pumpkin after pumpkin after pumpkin, tried different cuts of lamb.  Every weekend for months was filled with experiments in manty-making.  I was determined to get it right, even if it killed me and him both.  And, while it never went that far, I do remember one batch that resulted in us both doubled over with stomach pain and fighting for the bathroom.  Each failed batch of manty seemed to reinforce my own overwhelming feeling of being completely unsuited to being a Kyrgyz wife.  My husband, who had left his whole life behind for me, deserved someone who understood his culture and how to roll dough properly.

One day, not far from Embassy Row in Washington, DC, a wise Kyrgyz woman told me the secret, which was both culinary and linguistic.  The word tykva in Russian is generally translated as “pumpkin” but it means more than that, it means “squash.”  I was trying to make jack ‘o lantern pumpkins into something edible when I really should have been using butternut squash.  That afternoon, we passed a farmer’s market and excitedly picked out a suitably curvy and coffee colored specimen for the next batch.  The manty filling was right for the first time.  Mission successful, first test as wife finally completed, tragedy averted.

There have certainly been refinements over the years – I have stopped trying to make my version look like a proper Kyrgyz dumpling, favoring substance (i.e. taste) over style, I buy wonton wrappers, skipping the rolling pin and we top ours with a totally non-traditional squirt of Siracha sauce.
On chilly autumn afternoons, you will find my husband and me doling teaspoons full of lamb and vegetables into bite-sized pockets of love, our home filling with heavenly-smelling clouds of warm steam.  The first batch out of the steamer is devoured in minutes and my husband and son eat manty for every meal until they are gone then plead, “More manty, please!”  In our home, love and comfort are measured in manty.
Posted by Kelly Raftery at 7:00 AM