A Separation: Scenes from a Failed Marriage 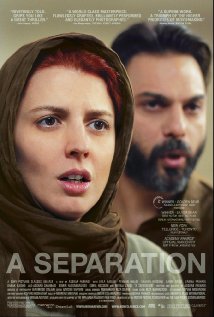 It’s an undeniable fact: Life in Iran can be hopelessly complicated. Economic sanctions and the nuclear issue aside, ordinary Iranians from all segments of society endure massive hardships just to get through the day. Nothing illustrates this circumstance better than A Separation, the Iranian movie that won an Academy Award for Best Foreign Film earlier this year.

Written and directed by Asghar Farhadi (who is also the man behind Fireworks Wednesday, which I reviewed here), A Separation is the story of a crumbling marriage—on the surface, at least. Like so many aspects of Persian culture, there is far more to the situation than meets the eye.

Simin and Nader are a middle-class couple from Tehran who live in a wealthy, North Tehran neighborhood with their 11-year-old daughter, Termeh. Simin wants to emigrate to a country where her daughter will have a chance for a life far better than what she faces in Iran, with its government-mandated piety and economic hardships. Nader refuses to leave because his father, who suffers from Alzheimer’s, is dependent on him for daily care. Simin files for divorce, but her petition is denied since the grounds she gives (her husband’s refusal to leave the country) fall short of the 12 reasons a woman can state for divorcing her husband (such as spousal abuse, abandonment, or drug addiction). Denied their divorce, the two separate, and Simin returns to her mother’s house. Termeh remains with her father and grandfather, clinging to the hope that, if she stays behind, her mother will return and everything will be well again.

Through an acquaintance, Simin finds a helper willing to look after the old man while Nader is at work. Razieh is a devout woman from a working class family with one small daughter and another baby on the way. She faces a religious dilemma when it turns out that Nader’s father is incontinent and she must bathe him, violating the Islamic rule that forbids a woman from touching a man who is na mahram, not her blood relation. Razieh’s husband, Hojjat, is an unemployed cobbler with a short fuse and a lot of shame at his inability to support his family. Razieh doesn’t tell him she’s taken the job—legally, she’s required to get her husband’s permission to work outside the home—for fear that, in his pride, he won’t consent.

The arrangement seems to be working fine until the day Nader comes home from work early and finds Razieh gone and his father lying unconscious on the floor, tied to the bed. Some money is also missing from a bedroom. When Razieh returns, Nader has worked himself up into a rage and orders her to leave. She refuses to go until she can clear her name and prove that she’s no thief. Furious, Nader pushes her roughly out the door.

Razieh suffers a miscarriage and loses her baby. She claims that Nader pushed her down the stairs outside his apartment. Her hot-headed husband, Hojjat, accuses Nader of murdering their baby, a charge that would carry the death penalty if the accused man is convicted. The case hinges on whether Nader knew Razieh was pregnant. If he did, his rough treatment of her would be a deliberate act leading to a murder conviction under the law. If not, he is guilty of a lesser charge.

Nader’s best hope would be to pay blood money, a provision under Islamic law where a convicted murderer can pay compensation to the victim’s family and avoid execution. Hojjat and Razieh are willing to accept the blood money, which would go a long way toward solving their economic difficulties. However, Nader won’t pay it because doing so would be an admission of guilt, and he insists he’s innocent. Instead he files a petition against Razieh for endangering his father with her neglect. With emotions running high, the situation threatens to get out of hand.

There are no heroes in this story. No villains, either. Both parties have a potentially legitimate claim, assuming they can prove their allegations. And everyone has secrets that complicate matters. Did Nader know that Razieh was pregnant and lied to protect himself? Or even because he’s indifferent to a baby born into a poor family, people of a class inferior to his own? That’s what Hojjat thinks, and this belief adds fuels to his anger.

Razieh is hiding her own secrets. What was so compelling that she had to leave Nader’s father alone and tied to the bed? Did her miscarriage have another cause? Maybe Hojjat found out that she’d taken a paying job without his permission and beat her, causing the miscarriage. So now she wants to pin the blame on Nader. That’s what Nader suggests.

In this complex tale, with its high-tension pacing, each wrong decision entangles the characters in a hopelessly snarled web that threatens to engulf everyone around them.

Underneath the movie’s complex plot lies a bitter social commentary—the idea that the harsh realities of life in Iran have made these events inevitable. Farhadi shows a world in which religion collides with economic hardship, deepening fissures in a society where modernity coexists uneasily with traditional values. But he also provides a rare glimpse into the lives of ordinary Iranians, who pursue the same dreams and suffer the same disappointments as people everywhere.
Posted by Heidi Noroozy at 7:00 AM