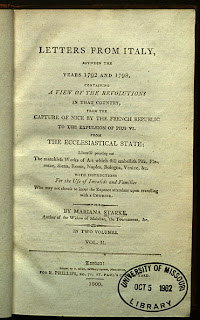 People have been writing about travel since they learned to write. Homer’s epic tales; exploration reports by the Polos, Columbus, Vespuci, and others; 18th century novels by DeFoe and Montesquieu who created imaginary manuscripts documenting “voyages” of their characters; guides to art and culture that led young men taking the Grand Tour. All this writing about travel documented what the travelers, real and imaginary, saw and did or what they should see and do. It was not until Mariana Starke published Letters from Italy in 1802 that travelers received practical advice about modes of transportation, places to stay, and where to eat. Starke’s work, frequently updated (and sometimes retitled) until her death in 1838, directly inspired the Baedeker and Murray Guides that dominated European travel in the 19th and 20th century and indirectly inspiring later guides such as Foder, Frommer, and Steves.

Starke examined the various ways to travel from England to the mainland. She wrote “the most convenient way of visiting the Continent is to go from London to Calais in a Steam-Packet; and…resting one night at Calais, (where Roberts' Hotel is particularly comfortable).” She noted that “Mr. Roberts is a Wine Merchant; and his wines are particularly good.” She went on to recommend other hotels. Before Starke, travelers were left to fend for themselves or to follow recommendations of friends who had previously traveled. Her work is sprinkled with hotel and inn suggestions, sometimes saying that a particular inn offers “tolerable beds” or that another is good enough for a meal but “unfit for sleeping.”

She commented on cuisine as well. The Florentine “markets are constantly well stored with excellent eatables, fish excepted, which is never fresh but on Fridays and Saturdays. The Florence wine is good and wholesome, but the same report cannot be given of the water, except that which comes from Fiesole.” She went on to say the Florentine water passes muster as safe, but that it isn’t good to drink. 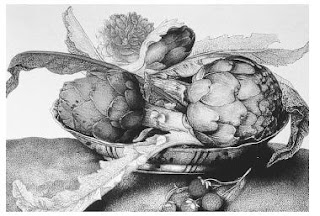 Her concern for reader’s health was sprinkled throughout the work. “Persons who wish to preserve health in Tuscany, should be careful never to eat sweet things made with orange-flower water, falsely so called; it being, in this country, a distillation from Italian laurel-leaf.” She also noted that “Doctor Kissock, a skillful and experienced English Physician, resides in this City (Florence). Of Rome, she wrote, “all the land is ill cultivated and worse drained; so that fogs and noxious vapours prevail there during night: it likewise abounds with sulphur, arsenic, and vitriol: hence, therefore, in some measure, perhaps, may arise that fatal Malaria which never affected ancient Rome.”

She commented on safety, noting that in Tuscany “no offense is punishable with death.” This first abolition of the death penalty took place there in 1786. Starke wrote that the repeal “and many other equally wise regulations…[contribute] to the almost total exemption from robbery and murder which this country has long enjoyed.”

Sometimes her advice was practical. She mentioned one Gasperini, an innkeeper, whose “dinners, generally speaking, are better cooked, and more comfortably served, than at the other hotels.” She also pointed out that “Gasperini builds carriages, sells anti-friction grease for wheels, and likewise repairs English traveling carriages remarkably well.”

She often included tidbits about local custom that might otherwise have taken the traveler by surprise. In Acquapendente, for example, she reported “every Passport must be examined and sealed by the Police Officers, who demand, in consequence, one paul [a coin] per passport.”

She felt that there was too much to be seen in Rome and arranged her itineraries “to prevent travelers from wasting their time, and burdening their memory, by a minute survey of objects not particularly interesting; thereby, perhaps, depriving themselves of leisure to examine those which merit sedulous attention.” She didn’t have much admiration for the ruins of antiquity and advised “whoever wishes to see these wrecks of ancient splendour advantageously, ought to visit them, for the first time, by the mild and solemn light of the moon; which not only assimilates with fallen greatness, but throws every defect into shadow; leaving imagination to supply every beauty, and array every object in its pristine garb of magnificence.”

Not everything she wrote was practical. Like travel writers before her, Starke included detailed descriptions of the paintings and sculpture in museums and churches. She painstakingly moved from room to room listing the things she saw. She devised the first rating system of the works as well, applying one to five exclamation points for the items she deemed the most interesting, beautiful, or worthwhile. Here is one rating at the Pitti Palace in Florence: “the Madonna della seggiola, by Raphael !!!!”

Mariana Starke continued traveling through Europe, and especially Italy, and updating her travel guide all her life. She died in Milan in 1838 at the age of 76. She was on her way home to England from Naples where she had been researching a new guidebook.