From Head to Head

One of the interesting minor facets of Italian life is watching the diverse hats and caps worn by members of the many branches of the military. I’m in no way an expert on the subject, but I enjoy looking at the often jaunty headdress of the military people I encounter on public transportation, in the street, and especially in parades.

Many branches sport elaborate dress hats for formal occasions but opt for simple berets for everyday use. These berets carry insignia for the service branch, and often of the regiment. In addition, the color of the beret can indicate to the conescienti, of whom I am not one, just which unit the person hails from.

The wearer of the everyday beret usually cocks it over one ear. A short ribbon often trails from the rear, floating in the breeze or bobbing in step.

Some groups which you might not automatically think of as military include the Forest Service and the Red Cross Volunteer Nursing Corps. They wear uniforms, put on distinctive headgear, and march in military parades. 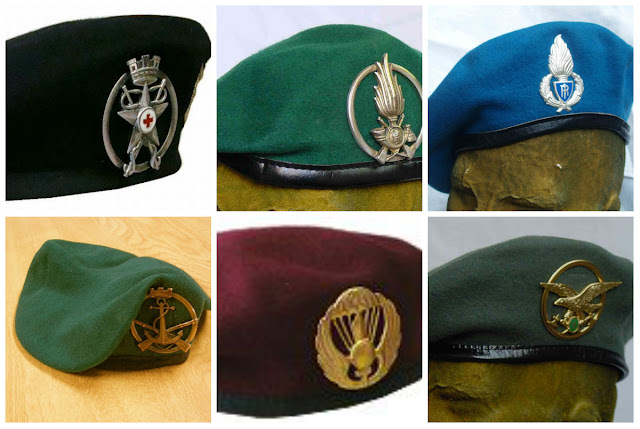 Women usually wear the same berets as men, but for formal occasions, they have their own hats. Pictured above are for women Caribinieri, sailors, and tax police. 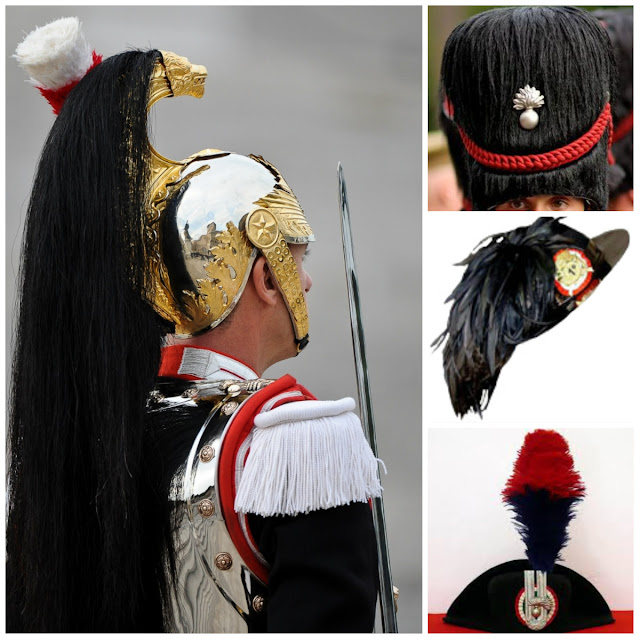 Some formal headgear reveal pomp and whimsy at the same time. The man on the left is a member of the Corazzieri, the honor guard for the President of the Republic. Other notable formal hats include, top, Granatiere di Sardegna, (Sardnian grenadier); center, Bersaglieri (sharpshooters); bottom, Carabinieri (military police that police both civilian and military populations). 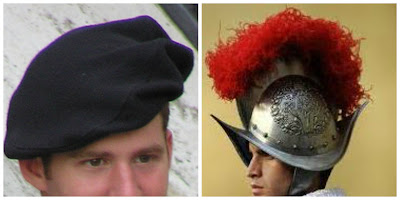 No look at military head coverings in Italy would be complete without a peek at the Vatican’s Swiss Guard. Like other soldiers in this country, they wear plain berets at times. At others they envelop their heads in helmets crafted from a 500-year-old design.

Finally, a random sampling of other headgear worn by a variety of Italian military  personnel. 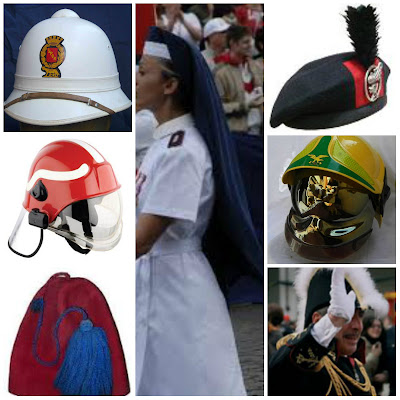 I blog on alternate Thursdays at Italian Intrigues . I hope you'll drop by often. Also, please visit my website at www.PatriciaWinton.com .
Posted by Patricia Winton at 7:00 AM