The Tea Smuggler of Gilan

When you drive north along the Chalous Road through Iran’s Alborz Mountains, the craggy cliffs and narrow ravines eventually give way to green forests until finally you spot a glimpse of the Caspian Sea, cobalt blue on a clear day, dusty gray under cloud cover. Drive west on the coastal road that hugs the seashore, and you’ll watch the misty mountains of Mazandaran Province descend to the rice paddies of Gilan. An hour or two later, the landscape changes again into rolling hills covered by a knobby-shaped vegetation. The countryside here is a vast mat of camellia sinensis—better known as tea.
In a nation that boasts 2,500 years of history, Iran’s tea industry is still in its salad days. It all started just over a century ago with a cloak-and-dagger story of subterfuge, espionage, and smuggling.
In the late 1800s, an Iranian prince named Mohammed Mirza (also known as Kashef ol Saltaneh) traveled to India as consul with the goal of learning the tea trade run by the British. But India’s Colonial rulers kept tight control over their precious tea plantations, so the prince went undercover as a French laborer. He learned how to grow, harvest, and process tea and later smuggled 2,000 plants out of the country under the shield of his diplomatic immunity. Mohammed Mirza planted his illicit crop in Lahijan, a city nestled in the green hills of Gilan. Lahijan remains a center of tea production today, as attested by the enormous statue of a teapot on the road leading into town.
Several years ago, my husband and I visited a family-run tea farm in Lahijan and received a tour of the fields and processing shed. We drove up a dusty track through tidy rows of evergreen plants that reminded me of the low-bush blueberries I’d seen in the Vermont hills of my youth. A few of the Lahijan tea plants were in bloom, displaying a seven-petalled white flower with an orange center. (Blooming is usually prevented by the harvest, but we arrived in the off-season.)
Some plantations in Gilan use mechanical harvesters, but this one, our guide explained, preferred local laborers who plucked the leaves by hand and gathered the harvest in big woven baskets.
Only the tips of the plant are harvested (the top two leaves and a bud). Over the growing season, the tea is picked three times, and each harvest is called a “flush.” The first flush, in early spring when the new leaves and buds appear after their winter’s dormancy, produces the best quality tea.
The harvested tea is spread out in troughs through which air is blown to wilt the leaves, a process known as “withering.” After that, the leaves are rolled to release enzymes that promote the next step of fermentation. This is a form of oxidation that creates the black tea consumed in every Iranian home. 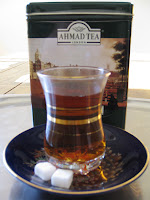 Lahijan plantations produce the best quality tea grown in Iran, a rich, amber-colored brew. But today, many Iranians prefer imports from India and Sri Lanka, which is putting a tremendous strain on the local tea industry. With a population of 70 million, Iran is the world’s fifth largest importer of tea according to the U.N. Food and Agriculture Organization.
Ironically, the most popular brand of imported tea is Ahmad, a London-based company whose blends come from tea varieties grown in India, Sri Lanka, and Africa. So perhaps, in the end, the British got their revenge on the wily Prince Mohammed Mirza of Lahijan.
Posted by Heidi Noroozy at 7:00 AM