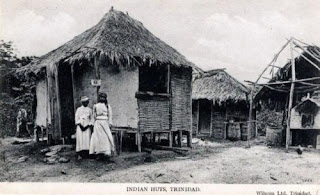 On May 30, 1845, eleven years after slavery was abolished, a ship called Fatel Razack landed on the shores of Trinidad and Tobago, depositing the first boatload of indentured servants from India. These workers would go on to work on the islands’ many sugar plantations, settling down, raising families, and planting their own roots in the Caribbean. Like many of their own names, even the name of that ship they arrived on, Fatel Razack, was a permutation of the original, in this case from the Arabic phrase “Fath al Razak,” which means “Victory to Allah the Sustainer.”

A hundred years later, in 1945, the Indian citizens of Trinidad and Tobago marked the centenary with a procession and ceremony, calling the celebration Indian Arrival Day. It was attended by a number of public officials, such as the acting governor representing the UK, and with greetings read from other noted dignitaries such as Mahatma Gandhi. Celebrations of the event, akin to the Mayflower landing in North America, continued on and off over the next few decades with less success than that first one and under different names, until 1995 when Prime Minister Patrick Manning declared the date of the 150th anniversary of the ship’s arrival as a permanent public holiday.

Between 1845 and 1917, more than 140,000 Indians emigrated to Trinidad alone, and today, ethnic Indians (East Indians as they're known in the Caribbean) celebrate Indian Arrival Day, mainly in the Caribbean, on different dates depending on country, but elsewhere as well. May 5, 1838, in Guyana. May 10, 1845, in Jamaica. June 5 in Suriname. In Fiji, where the event is known as Girmit, on May 14, 1879. In Mauritius, November 2. According to a number of Internet sources, the event is also celebrated in Australia, Britain, Canada, Martinique, New Zealand, South Africa, and the United States. 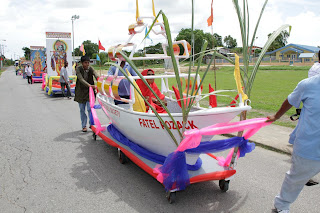 Nowhere is it more popular than Trinidad and Tobago, though, where it’s a public holiday with at least a dozen melas (parties) thrown across the islands. On some levels, it’s a controversial holiday. Some suggest taking out the word “Indian,” for why should any one group get to celebrate their arrival when so many others hail from other lands and cultures as well?

Whatever your position on that subject, Trinidadian blogger Nicholas Laughlin makes an interesting observation about arrival day itself:

“I suppose I wish I knew exactly when my ancestors first arrived in Trinidad, and maybe a few days' research at the National Archives would turn up some answers, but I find I'm far less interested in the moment of arrival itself and far more interested in the new journey that 'arrival' begins – in the process by which wanderers, exiles, prisoners, and explorers make of the disjecta membra of many old worlds, something new and strange and perhaps, in the original sense of the world, wonderful.

We reach. And the journey now start[s].

Bon voyage to us all.”

Well put, Nicholas. And Happy New Year to us all as well. May our 2012 be filled with adventures galore and rich, rewarding journeys. 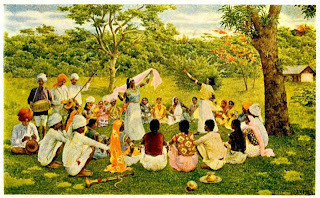