Off the Beaten Track: Finding the Right Words

This week’s featured guest is author Sujata Banerjee Massey, who recently ended her fabulous Rei Shimura mystery series with the tenth and final installment, Shimura Trouble. Along the way, Sujata has collected numerous mystery award nominations, including the Edgar and Anthony, won the Agatha and Macavity awards, traveled often to Japan for research, and saw her books published in 18 countries. She is currently writing a new standalone novel with the working title, The Sleeping Dictionary. It's a historical thriller that tells the story of India's struggle for independence through a young Bengali woman's point of view.

When I was invited to write for this blog, I was delighted. In my opinion, there are not enough books published showing us the world. To wit: when I was getting ready to send out The Salaryman’s Wife, I attended a conference at which a famous mystery editor opined that mysteries in foreign countries don’t sell – except if the location was England! I swallowed hard, because my unpublished manuscript was set in Japan. And what made the situation all the harder was my inner worry that I didn’t have the right to write about Japan.


Yes, I had lived there for two years and had made extended trips to continue research and fact checking. I spoke a little bit of the language. But I could not read kanji characters; I could not understand sophisticated conversation and nonverbal cues; I had not grown up in a household with Japanese traditions. By blood, I was Indian and German. Not Japanese!

What makes someone of another nationality race to capture a different country on paper? I have found myself examining this, years later. In my case, I fell in love with Japan: its proud traditions, modern gadgets, and kind people. All of it gave me the drive to start my first novel whilst living in Hayama, and to finish it four years later in Baltimore.

The young narrator I created for my book was a “foreigner,” so it was possible to explain foods, objects, and rituals without seeming awkward. Much harder was making the Japan-born characters’ speech and actions authentic. The solution turned out to be a rather lengthy one. I started a Japanese immersion class at the Yokohama YMCA, and after building a base of nouns, learning simple conversation patterns, and exploring the many permutations of verbs, I began to learn Japanese idioms. Now my manuscript began to include expressions like “grinding her sesame seeds” (pandering to a someone above you) or Shigata ga nai, “It can’t be helped.” These are the things that made not only the language, but the story, take flight. 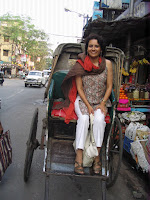 I had enough proverbs and idioms to write ten books set in Japan. So I did. But then, something funny happened. Another country came calling: India, specifically the city of Calcutta, my father’s hometown. I had been to India several times since childhood, but never felt brave enough to write about it. Further restricting me was the fact that I didn’t speak an Indian language. I felt like I really needed Bengali for this historical novel set at the end of British rule in India. Finding a Bengali class in Minneapolis was impossible, so I enrolled in a regular daily undergraduate Hindi course at the University of Minnesota, which I dutifully attended for a year. I was soon reading, writing, speaking, and loving this language and its linguistic brother, Urdu. However, to be fond doesn’t mean to know. After the year of study was over, most of what I learned for tests fled my memory, because I wasn’t living in an environment where I would use my newly acquired vocabulary. Anyone out there who studied French in high school may understand the situation.

So, my India book is almost done. I can understand Hindi better than before, but not hold a real conversation. However, I have also retained some sense of word order, grammar, and word choices that helped with dialog. There are also many varieties of English spoken by Indians that fascinate, from educated, old-fashioned British school English to the pidgin-style language of servants to their masters. And of course, there are metaphors and similes and proverbs that translate quite interestingly. For Bengalis, the mark of a thief is overwhelming respect. If someone’s terrified, her hands jump into her stomach, and if things really get bad, it’s like pouring ghee on the fire. Bang!

As I work on this new book with a mixture of excitement and trepidation, I still think about the long-ago editor’s comment about foreign-set books being underachievers. In hindsight, I feel that the sorry situation has arisen because of the American education system. Most U.S.-born people cannot identify foreign countries or their leaders, let alone speak a second language. Without ever having learned words in another tongue, it is difficult to imagine another kind of place. It’s intimidating to buy a book that is about something foreign: will I really like a book about a detective in Botswana, a journalist in Sweden, or an art dealer in Italy?

By painstakingly working to make a foreign language come alive, we can perhaps reach that reader.
Posted by Supriya Savkoor at 7:00 AM